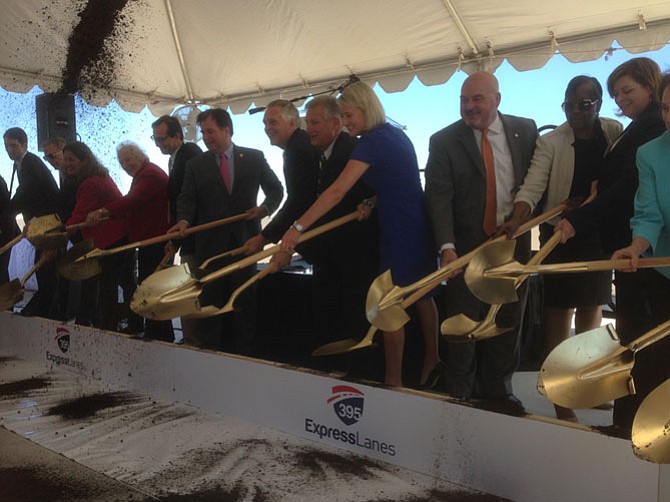 State transportation officials get out the golden shovels to kick the 395 Express Lanes project off. Photo by Mike Salmon.

With all the elected officials on hand, it was time for George, Arlington County’s explosive and firearms detection dog, to keep everyone safe.

Gov. Terry McAuliffe touted it as “more congestion relief, reliable choices,” in his speech to transportation officials on top of the Pentagon City parking garage, overlooking I-395 and the Pentagon.

“This is a historic milestone in the commonwealth’s attempt to improve transportation in Northern Virginia,” added state Transportation Secretary Aubrey Layne.

The 395 Express Lanes extension will continue the lanes past Edsall Road, where they currently end, to the Washington, D.C. line at the Potomac River, a path that is currently occupied by high occupancy vehicle (HOV) lanes that have ridership restrictions, but no tolls. With the express lanes, vehicles with one or two people pay a toll to ride on the lanes, but vehicles with three people can ride for free with an EZ-Pass Flex, which has an HOV-3 switch. These are similar to lanes currently on I-495 and I-95.

A certain percentage of the toll money goes back to Transurban, the private partner from Australia that is building the lanes, but some of the money goes to infrastructure improvements in this corridor, according to the state Department of Transportation. McAuliffe said that amount will be in the millions annually.

“$15 million annually is coming out of this project to help with the multi-modal aspects of this project,” he said. Multi-modal aspects include carpool lots, bike lanes and bus lines, but the specifics of these improvements has yet to be decided. Jennifer Aument of Transurban took some responsibility for delivering improvements. “We’ll provide a sustainable funding source that local leaders can use,” she said.

A large part of this project is adding another lane to the existing HOV lanes but the interchange at Eads Street in Crystal City will be redesigned, sound walls will be erected, and everything paved, so drivers will be impacted to some extent. The whole project is anticipated to cost approximately $500 million, with a combination of private and public funds, according to a statement released by McAuliffe’s office.

In addition, there will be a widening project going on at Duke Street and Edsall Road and I-395 where there is a current bottleneck, and improvements will be made to the south parking lot at the Pentagon. These are not part of the 395 Express Lanes, but to drivers caught in the construction delays that come with projects like this, it will appear so.

“It’s a needed improvement, having been stuck there many times myself,” said McAuliffe of the additional lane at Edsall Road.

Arlington resident Cheryl Green is aware of the express lanes around the area, and feels that “it will ease the flow of traffic on the highway,” so she is eager to see how it works.

Kristen Dena is in sales, so she’s driving every day and uses the 495 Express Lanes frequently. “They can get pretty expensive,” she said.

The 395 Express Lanes northern extension was originally part of the whole 95 Express Lanes project back in 2009 but was taken off the project because of the opposition from the officials in Arlington, who felt it impacted their county and residents negatively, particularly in the Shirlington area. Project planners implemented a compromise, and stopped the express lanes at Edsall Road in Alexandria, building a ramp for the drivers to get back on I-395 if they did not have three passengers to qualify for the HOV restrictions. The new project includes the multi modal funds and does not impact the Shirlington interchange, so Arlington agreed to it.

According to Eric Balliet, a communications specialist with Arlington County, the current project is far more balanced with on-going dedicated funding to support increased transit and other multimodal improvements in the corridor. The new plan is also sensitive to jurisdictional impacts than the Commonwealth’s 2009 proposed extension of express lanes through Arlington.

McAuliffe used the ceremony to highlight other transportation improvements going on in Virginia totaling $10 billion. This includes a two mile extension of the 95 Express Lanes in Stafford County to alleviate a bottleneck, and the Atlantic Gateway, a project for the eastern part of Virginia that includes the express lanes, as well as harbors, rail and other improvements.