Arlington middle and elementary schools to undergo redistricting in the fall. 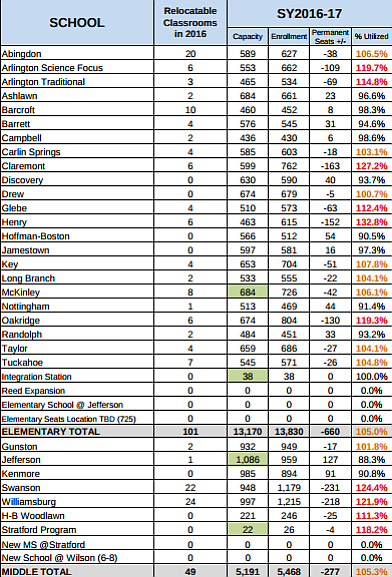 Some school systems go years, even decades, between redistricting efforts. In Alexandria, the school boundaries had been in place for 17 years before redistricting in late 2016. In Arlington, it’s been eight months. In December 2016, the School Board approved new redistricting boundaries for high schools in Arlington. Starting in the fall, Arlington Public Schools will begin another round of redistricting that looks at shifting the boundaries for elementary schools and middle schools.

According to School Board chair Barbara Kanninen, the redistricting plans are the results of new elementary and middle school openings scheduled for Fall 2019. A new 1,000 person middle school will be opening at the Stratford Building, currently H-B Woodlawn. A 725-person elementary school is scheduled to be built adjacent to Thomas Jefferson Middle School.

“We have to [change] school boundaries to move kids in the right direction so the schools are under crowded,” said Kanninen.

“We’re changing boundaries to make sure there’s a balance of students,” said Kanninen. “Yes, for a variety of reasons people don’t like when they buy a house and the boundary moves. The goal is for this to be as positive and constructive as possible. It’s easy for the community to get territorial. The goal is to make the entire school system strong.”

While some redistrictings are limited to block by block changes between two or three schools, Kanninen said the fall redistricting will be systemwide.

The first stage of redistricting will deal with the middle schools. Kanninen said discussions about the redistricting process will begin after school starts with a decision to be made in December. Then in January, Kanninen says the School Board will begin to tackle the elementary school boundaries to be finalized by the end of the school year.

Arlington’s elementary school districts were changed in May 2013 and reassigned 900 students. The high school redistricting last fall reassigned 350 students, but faced criticism that the changes deepened the existing economic stratification within the school system by shifting greater numbers of students living in poverty to Wakefield High School and away from Yorktown High School.

This year, Kanninen said the School Board is working on an ambassador system where someone at each school will be a volunteer expert and school resource during the redistricting discussions. Kanninen said she hopes this new position will help with grassroots communication during the redistricting process. Arlington Public Schools Communications Coordinator Frank Bellavia said in an email that more information on the plans for redistricting will be available in mid-September after school starts again.