Coffee with a Cop in Herndon: Catching Up With The Chief
Votes

Coffee with a Cop in Herndon: Catching Up With The Chief 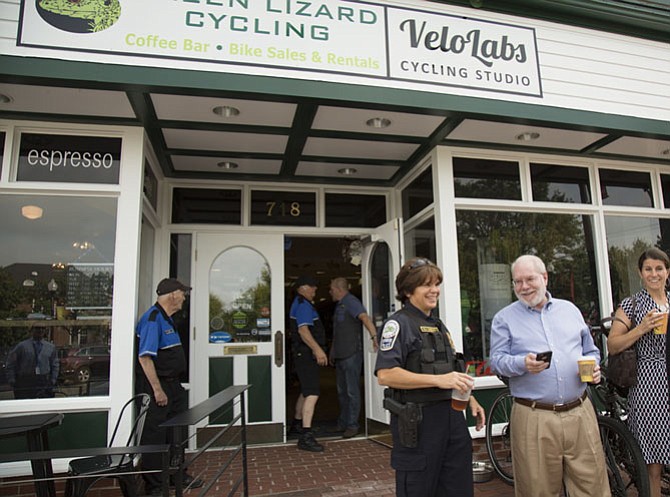 Herndon Police Chief Maggie DeBoard speaks to people outside of Green Lizard Cycling during a “Coffee with a Cop” event on Thursday morning, July 27. Photo by Fallon Forbush.

Cpt. Brad Anzengruber grabs some coffee while he chats with a barista at the bar inside Green Lizard Cycling.

Beth Meyer (center), who owns Green Lizard Cycling with her husband Dave Meyer, took the opportunity to speak with police officers Sgt. Bobby Galpin and Chief Maggie DeBoard about her concern for cyclist and pedestrian safety in the town.

Herndon Police Chief Maggie DeBoard and some of her police officers stopped by Green Lizard Cycling on Lynn Street in downtown Herndon for the department’s “Coffee with a Cop” event on Thursday morning, July 27.

“We’re just meeting people and finding out what’s going on,” DeBoard said. “The more people we know, the more likely they’ll be to pick up the phone and ask for help.”

The cycling, coffee and beer shop selected two options from its regular repertoire for the public to sip on for free from 7-10 a.m.: Sumatra Dark Roast and Red Goat Medium Roast from the Kaladi Brothers Coffee Company, which roasts its beans in Alaska. A sampling of chocolate cupcakes from the Amphora Bakery’s Herndon location on Sunset Park Drive were also provided.

“We think the police are an important part of the community,” said Beth Meyer, who owns the establishment with her husband Dave Meyer. “We want people to feel comfortable with police — a tightknit community in downtown Herndon.”

The department hosts the coffee events each quarter and selects different venues around Herndon.

“I’m glad they picked us this time,” Meyer said.

Lights were installed along the Washington and Old Dominion Trail, which stretches through the town and runs parallel to Green Lizard Cycling, in September 2014, but Beth Meyer took the opportunity to speak with police officers about her concern for the lack of lighting on some of the other streets and trails in the town.

“I just want to make sure everyone is aware and safer on the streets,” she said.

Gov. Terry McAuliffe has proclaimed September as Bicyclist and Pedestrian Awareness Month in Virginia for the past several years. After their conversation, Meyer and officers came up with an idea: This September, Green Lizard Cycling and the department will partner on a joint social media campaign to spread awareness about sharing roadways with bicyclists, motorists and pedestrians.

Other topics on coffee drinkers’ minds included the lack of parking spaces downtown and lack of enforcing the rules for the spots that exist.

Lt. Mike Berg was happy to inform people that the department was in the process of hiring a new parking enforcement officer, who he hopes will start working this summer.

A lot of people asked officers about the new body cameras the department implemented, according to Sgt. Sean Merritt. The bodycams, Panasonic Arbitrator Body Worn Cameras, were unveiled at a public forum by DeBoard on Thursday, March 30.

At the time, the cameras were to be fully deployed by May. However, the bodycams were not fully implemented for all of the department’s 53 officers who provide police services to the public until last week.

“The last few officers were trained this week,” Berg said. “We are fully deployed.”

DeBoard was trained the day before the coffee event and would be getting her bodycam by the following day at the latest, she said.

“I’ll be wearing mine probably by this afternoon,” she said.

McAuliffe’s administration appointed DeBoard to the Virginia Forensic Science Board on Friday, July 21. The Department of Forensic Science is a nationally-accredited forensic laboratory system, established by Virginia law, to provide forensic laboratory services to the commonwealth’s state and local law enforcement agencies, medical examiners, commonwealth’s attorneys, fire departments and state agencies in the investigation of any criminal matter.

“I was asked if I was interested to serve,” DeBoard said. “The board requires law enforcement presence on the board.”

She said her four-year position would help form policies and lab reviews, but that she had not had her first meeting yet.

“I look forward to serving and learning and representing chiefs throughout the state,” she said. “Forensic science, the whole profession helps everything we do and solve crimes. I hope to bridge the gaps.”

Lisa Herndon, a radio personality with WINC, 92.5 FM, in Leesburg, started working for the department as a public information specialist on Monday, July 17. She replaced Jane Ross, who moved out of the state.

Herndon let her radio listeners know about her career move and next chapter in life on Facebook.

“Over the past seven years, the WINC FM listeners and my coworkers have become family,” she wrote in a post on Facebook. “I have my dream job and have the best friends. That's why it is so hard for me to tell you that today is my last day on the WINC Wake Up Show. In an ideal world, I would stay on the WINC Wake Up Show until the day I retire. But it just wasn't realistic for me and my family. It was time to go and a new direction and today is the day I start that journey.”

“I’m excited about this new chapter in my life, but also so heartbroken to leave you,” the post added.

The department hosted a promotional ceremony on Monday evening, July 31, at the Herndon Council Chambers Building.

The town of Herndon is scheduled to participate in National Night Out on Tuesday, Aug. 1, after deadline for this paper. The national event is a community police awareness campaign held on the first Tuesday of August. Participating neighbors host outdoor block parties and events for children and families. The police department and its officers, accompanied by members of the Herndon Town Council, circulate throughout the town to help neighbors celebrate and to talk about the importance of safety and community policing.