Fight or Flight in Arlington
Votes

Fight or Flight in Arlington 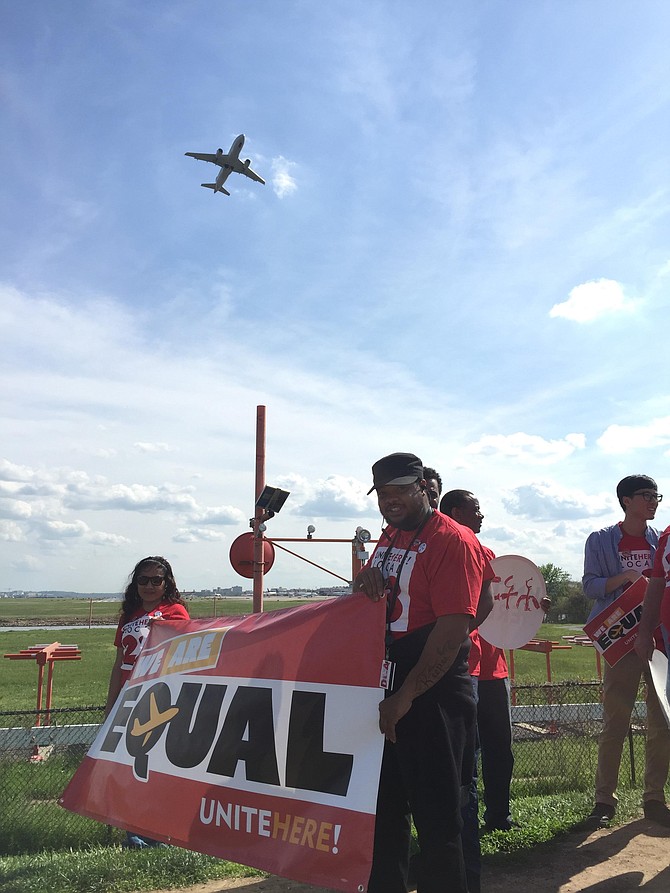 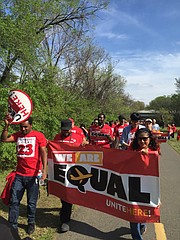 Marchers on the Mount Vernon Trail. 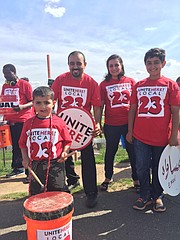 After marching and chanting in the streets by airport workers for years about the need to reform airport labor conditions, someone finally listened. The Metropolitan Washington Airports Authority Board voted on April 19 to require businesses that do business at all local airports to pay contract workers a base hourly salary of $11.55 starting January 2018. That hourly salary requirement increases annually up to $12.75 in 2020.

For local labor groups, it’s not the $14.27 many were asking for, but it’s a start. A week before the decision was announced, on April 12 dozens of food service workers and supporters from other labor groups came out to advocate a living wage for all airport workers. They were joined by Del. Alfonso Lopez and state Sen. Barbara Favola, who expressed support for the group. Dozens of workers dressed in red marched from Gravelly Point near the airport to the Martin Luther King Memorial in D.C.

“There’s a big difference in how we treat airport workers,” said Bent Bayou, an organizer of the march. “Airport workers make $8.25 or $8.50 for airlines making billions in profits. We’re asking for equality among airline workers for at least a $14.27 living wage.”

“I see, in my job, problems that I can’t fix alone,” said Remy Jones, a food assembler at Reagan National Airport who lives in Alexandria. “We’re understaffed, working multiple people’s jobs, and some of that stems from the low pay. [Once we fix that] it will start to help the other problems.”

After rent is paid each month, Jones says he has just $100 left from what he makes each month to pay for food and transportation costs.

“We wanted to reduce what we noted as high turnover rate among hourly employees,” said Andrew Tull, media relations coordinator for MWAA. “One way to do that is a more competitive wage policy … This applies to anyone who works on airport grounds or airport properties. Beginning Jan. 1, 2018, anyone who is considered an affected employee will be governed by this new policy.”

Many of the workers said that the current pay leaves them unable to afford basic services or provide for their families.

“We need to stand up for ourselves,” said James Yon, a warehouse worker at Reagan National Airport. Yon said when he first started, the hours were fine, but that they have since been cut back. Yon, who lives in D.C., said the less hours and pay that hasn’t adjusted for cost of living has been taking a toll. “Now, I’m late on making rent payments. They keep adding responsibilities to our job, but the pay doesn’t change.”

Eric Williams, another food worker at Reagan National Airport, said a living wage was the first big step for the food assemblers and other airport laborers. After this, Williams said he hopes to push for adequate paid leave and a more efficient clocking in and out system.

“I come to work with a good attitude … but [the low pay] is a morale killer,” said Williams. “A lot of the system’s inadequacies are pushed down to the workers.”