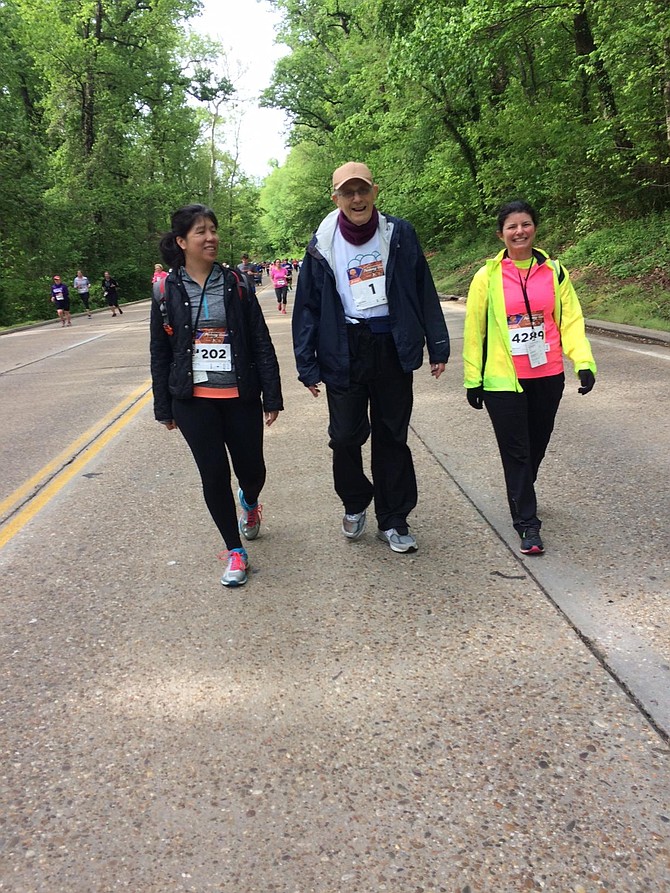 Donald Trilling and his two friends, Thai Phi Le, from Arlington, and Eileen Gaughran, from Alexandria, is running his 30th consecutive Parkway Classic, at age 89. He is given race number “one” every year to honor his long record of consecutive runs in this race. Photo by Eden Brown. 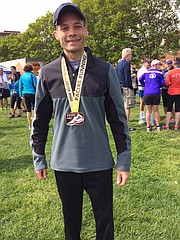 Chris Petrock won first place in the 45-49 age group, running the race in just 1:01. He is a resident of Alexandria. 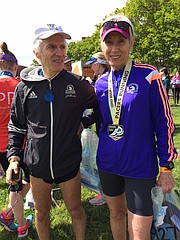 Jay Wind (left) of Arlington won the men’s 65-69 race with a time of 1:2369, after competing in the Boston Marathon only six days ago. At 67 years old, as soon as the race ended, Wind was already handing out flyers for the upcoming benefit 5K “The Mercy Run” to be held in Falls Church next weekend. Mary Fredlake (right), from Washington, D.C. won first place in the women’s division 65-69 years, running the race in just 1:3131. She ran a 9:09 minute mile. 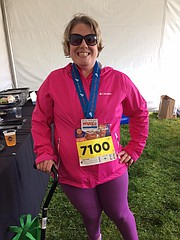 Jamie Watts, of Arlington, has run the GW Parkway Classic three times. She started at 4 a.m. and thinks she did a little faster than her previous time of six and a half hours. Watts has done over 109 races. She has cerebral palsy and walks with canes. Watts was born prematurely in a small town in Missouri, where the medical team did not have the resources to help her: still, she says, “I wouldn’t trade my life for another: you either make the most of a handicap, or you don’t. I work for Bender Associates and help people with handicaps get jobs.” 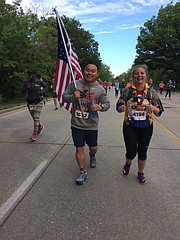 Alan Nguyen, a civilian employee at the Department of Defense, and Mary-Elizabeth Pratt, a veteran of the Coast Guard, ran carrying the American flag to support veterans. 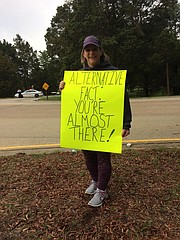 Alexandria resident Donna Oliver holds a sign up for runners, pouring on the good cheer runners need at that point in the race. 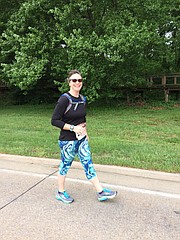 Arlington resident Meredith Klinger was running her first GW Parkway Classic. She started running this year, for the first time in her life to shed weight. Walking off the pounds at first, she realized she could get her exercise over with faster if she ran. Sixty pounds later, she ran the race in just over two hours. 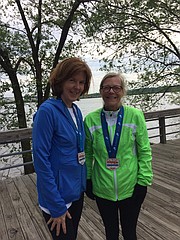 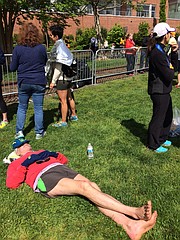 David Kenny of Frederick, Md., enjoyed the rare sunshine and euphoria of finishing the ten miler.

Jamie Watts will be pleased when she sees her time for the 33rd annual George Washington Parkway Classic. She cut her time down to six hours and 20 minutes, covering the 10 miles with the kind of dedication she shows in the rest of her life. Alexandria residents cheered her on as she closed in on the end of the race in Old Town. Donald Trilling, the oldest participant in the race, will be pleased he once again came in just short of last. His time was four hours and 51 minutes, which is not bad for 89.

The GW Parkway race again proved to be an inspiring race on Saturday, April 23. Four thousand four hundred and eighty-one runners ran 10 miles. Another 1,318 runners ran the 5K race. As they did last year, Pacers Running Shops handled logistics, busing runners into the start and back to their parking lots, with Two Men and a Truck shuttling belongings, Starbucks offering coffee, the National Park Service taking pictures of participants, bands entertaining, Port City Brewing handing out beers, and local residents, volunteers, and security officials providing a friendly buffer along the parkway.

Once again, running groups raising money for veterans, neighbors in need, and breast cancer were there, getting shout-outs on the public address system.

Meredith Klinger, who was running her first GW Parkway race, and who began to run for the first time in her life this year, finished in just over two hours with a 12:05 mile.