Record Store Day is this Saturday. 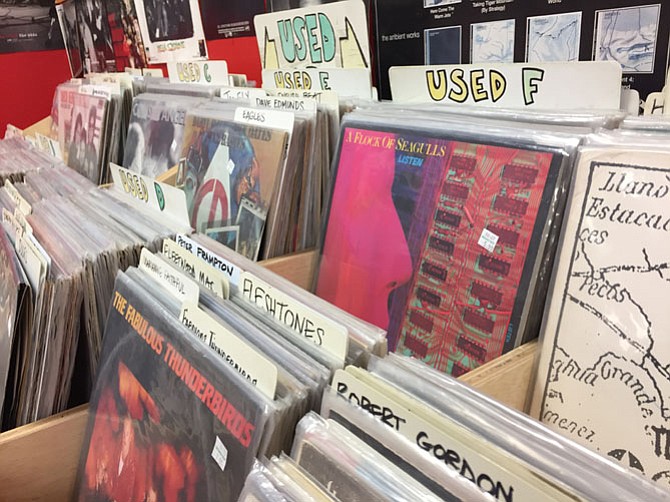 The shop on North Fairfax Street is overflowing with records of all vintages.

What to expect: Rare releases, but hurry. “(Record labels will) put out a special limited-edition release that will only be available in independent stores, so these are things you can’t get at Barnes & Noble, you can’t get at Target or Urban Outfitters; these are things that will only be available at little places like this. It’s wonderful,” says Crooked Beat’s Paloma Alcala.

For more than a decade, Alexandria has been bereft of any record shops. But passers-by walking along North Fairfax Street are now in for a treat: Crooked Beat Records is one of Old Town’s newest neighbors.

Crooked Beat – a transplant from D.C.’s Adams Morgan neighborhood, where the store enjoyed a lengthy reign – moved into North Old Town six months ago, and it’s created new fans as well as welcomed existing followers across the river.

“After months of searching (for a new location) in D.C. and not being able to find a place that was right, Crooked Beat expanded the search to Arlington and Alexandria, and this was the place that was found that fit our purposes – and it’s wonderful. It’s much bigger than the old store,” said Crooked Beat’s Paloma Alcala.

The neighborhood was ready: From longtime customers to folks walking past on their way out of the nearby gym, the record-shop community continues to grow.

“You get a fair number of people who do come in and want to look around for the novelty of it because they’ve never seen anything like this place before,” Alcala said. “But there’s also a lot of music lovers in this city, and we get to know them, and they love having us here and we love having them here.”

The shop’s arriving to town just in time to prepare for the biggest event of the year: international Record Store Day this Saturday, April 22.

“Record Store Day was organized 10 years ago – this is the 10th anniversary this year – as a way to get more people coming to independent record stores, which 10 years ago were not doing too well and there was a fear that all the independent stores would be swallowed up,” Alcala said.

Independent shops worldwide participate in the proceedings, often offering up limited-edition albums and other perks that aren’t available any time other than April 22. This year, Crooked Beat is bringing its own record to the party: A limited-release Clash tribute album called “Recutting the Crap,” featuring bands from across the country, but primarily based in the D.C. area.

“There’s only going to be 1,000 of these available for Record Store Day, and that’s for record stores everywhere,” Alcala said. “… We’ve had stores order this from the U.K., from Europe, from Japan, of course a lot from the U.S., and we’ll have a lot them here but we’re thinking they’re probably not going to last past the first rush of people who come in.”

On the day itself, a helpful hint: Don’t be late, Alcala said. The festivities start at 9 a.m. and the store is a madhouse right away.

“It’s very intense. You get a lot of people showing up. There are people who do camp out in front of the store. … on Black Friday we had someone out in front of our store at 2 a.m.,” she said. But “there’s a sort of party atmosphere as well. Everyone’s having fun.”