Between the Lines in Alexandria
Votes

Between the Lines in Alexandria 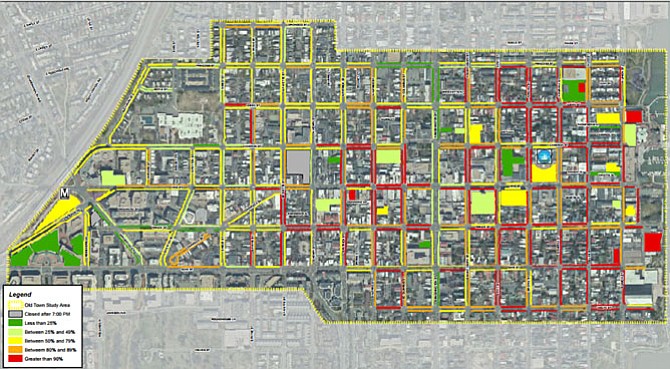 On-street parking occupancy in Old Town during a weekday. Graphic from the 2014 Parking Study

“There’s a lot to this I’m really concerned about. I’m concerned where this is headed … We’re setting ourselves up again, and I think it’s going to be a problem.” — Councilman Paul Smedberg

As new developments were being approved throughout Old Town, a trend emerged that disturbed several on the City Council and in the public. Whether residents at the new developments were permitted to park on the street was being decided seemingly at random. At the discussions on Robinson Terminal South, Robinson Terminal North, Edens, and the ARHA Ramsey sites, discussions over whether or not residents should be allowed on street parking was a major focus of the public discussion. In response, city staff developed a policy.

If the average on-street parking occupancy around the proposed site is 85 percent or higher at the time of the project approval, the restriction will be applied to the development. The is intended to ensure that areas where parking conditions are documented at being near capacity will not be worsened by new residential development. According to Katye North, principal parking planner for Alexandria, 85 percent occupancy generally means an area is considered “full.” Occupancy of parking in the street is determined as part of parking studies commissioned by developers and reviewed by city staff as part of the approval process. Survey times for parking occupancy in the surrounding area was originally proposed to be peak times, but the staff report notes that more specific survey times will be determined as part of the policy’s development process.

The second criteria is that developments where the ground floor of a proposed building is predominantly non-residential will be ineligible for on-street parking for residents. According to the staff report, adjacent on-street parking will likely be used to support the commercial uses for the property.

Though the need for a new parking policy was proposed by the City Council, several at the April 4 meeting were concerned about the impact of the new guidelines.

“We want to encourage mass transit use … but a lot of people still have a car and need a place for their car,” said Mayor Allison Silberberg. “We have to be really aware of this. If we don’t have enough parking, generations from now … people will be like ‘what were they thinking? They weren’t planning enough.’ We already see parts of our city where there aren’t enough places to park.”

For Councilman Paul Smedberg, one of the leading voices on the council pushing for a new parking policy to be investigated and established, there was a concern that the policy was unfair to some residents who paid the same taxes as their neighbors but would not receive on-street parking.

“Why do [some residents] get a sticker but people in townhouses paying the same taxes can’t park on the street? But someone buying a home attached to another house can?” asked Smedberg, to which staff agreed that this case could arise. “There’s a lot to this I’m really concerned about. I’m concerned where this is headed … We’re setting ourselves up again, and I think it’s going to be a problem.”

North said that the fairness of the policy was one of the issues staff struggled with, but that staff ultimately had to take an objective look at the impact of larger residential developments on the numbers for parking in Old Town. Vice Mayor Justin Wilson expressed his approval of staff’s policy proposal.

“Given the wide range of options, I think you struck a good balance,” said Wilson. “At least [we’re] coming up with some rational approach to how we apply these conditions.”

After the City Council meeting, the policy was discussed at a public hearing before the Planning Commission on April 6. Some local residents were concerned about developers being the ones in charge of the parking studies for the new residences, others argued that the parking restrictions didn’t go far enough.

“[New developments] should be fully parked on-site,” said Bert Ely, co-chair of The Friends of the Alexandria Waterfront. “Residents of developments should not need or be allowed to obtain residential parking permits. There is a very high on-street parking demand. It’s much closer to 100 percent than 80.”