Hearing to get public input on the town's proposed FY 2018 Budget on Tuesday, April 25. 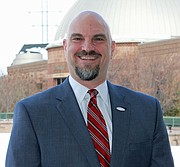 Photo courtesy of the Town of Herndon

Town of Herndon Acting Town Manager William “Bill” Ashton and the Herndon Town Council has recommended to keep the real estate tax at 26.5 cents per $100 of assessed value.

Despite expecting to pull in less revenue, the town of Herndon has advertised a budget for next year without raising taxes on its residents.

Many seem to agree with his opinion. The Herndon Town Council held a hearing on the budget on Tuesday, April 11, and only one person from the public showed to testify.

“When we were looking at the budget and what we were trying to accomplish, we felt that we could take that level of revenue, even though it has been a no-growth revenue cycle for us for several years, we decided that we could still meet our demands, meet the objectives of council and maintain that tax rate,” Ashton said.

Ashton found savings for the town by data mining its finances and rethinking its expenditures, he said.

This is the first year the town has been able to leverage data from its new financial system that Ashton has been implementing over the past few years as Herndon’s IT director prior to being appointed acting town manager on Jan. 10 when Art Anselene, the former town manager, retired.

“What that allowed us was to drill down into a very granular level into the individual accounts and look at how the money was being spent and to try and get a good flavor of a three-year pattern of expenditures in certain operations accounts and we were able to see some anomalies in there,” Ashton said.

He noticed that some expenditures were significantly less than what they were being budgeted for, like the town’s allocation for fuel costs.

“We can create capacity by taking the budgeted amount and bring it back closer to where reality lies and thereby free up those funds to go to something else,” he said.

Despite the flat tax rates and penny pinching, the nearly 8 percent reduction in the overall budget is driven by the town’s healthy list of capital projects, according to Ashton.

The budget for the town’s Capital Improvement Program totals nearly $7 million with an additional $4.2 million for capital projects in the town’s Enterprise Funds, which are standalone funds separate from the General Fund.

This funding does not include expenditures for Herndon’s highly anticipated downtown renovation, which is still under negotiation.

DURING A SPECIAL MEETING on Nov. 30, 2016, the Herndon Town Council adopted a resolution that directed town staff to move forward with negotiations on a proposal for the redevelopment of nearly five acres of downtown Herndon with Reston real estate firm Comstock Partners.

The town is expecting the 24-month construction to be underway come next summer, as it proposed forgoing its annual four-day festival in 2018, which occurs every June around the town’s municipal center complex and Town Hall Square. These areas will be affected by the construction.

The cancellation of this event next year was also another way the town saved some money.

“The downtown redevelopment is still in negotiations and I can’t go into any detail about that because we’re still in negotiations,” Ashton said. “We hope to have it before council sometime this summer, but there is a lot of factors and variables that will affect that.”

Though the work is not allocated in the new budget, it is still a priority for the town and is expected to come to fruition in 2018.

“I think it’s the mayor and council’s No. 1 priority right now, and we’re doing everything we could in this fiscal planning document to prepare ourselves, but we couldn’t add any specifics to it because we’re still in negotiations,” said Ashton.

Though details are lacking, Ashton is confident the town will be able to fund the work when the time comes.

“We did some structural things to the budget to allow us some flexibility, to give the council flexibility to do what they needed to do to make this project happen,” he said.

Depending on what the town needs to pay, a budget adjustment will be built around the project that the town council will then vote on, according to Ashton.

The town’s fiscal years begin on July 1 and extend to June 30. Budget adjustments take place each year in July, as well as mid-year in February.

THE TOWN is pushing forward like it is a done deal.

On Friday, April 14, the town issued a request for proposals seeking bids from nonprofit arts organizations within 25 miles of the location to operate, manage and conduct arts programming in its future downtown Arts Center.

The RFP states within the “Project Overview” section that the town has, “selected Comstock Partners to redevelop 4.675 acres of land owned by the town into a mixed-used development.”

The Herndon Town Council will hold another hearing to get public input on the town's proposed FY 2018 Budget on Tuesday, April 25 at 7 p.m. in the council chambers at 765 Lynn St. Citizens may also submit comments about the budget online or by sending an email to budget@herndon-va.gov.