The school presents “Guys and Dolls.” 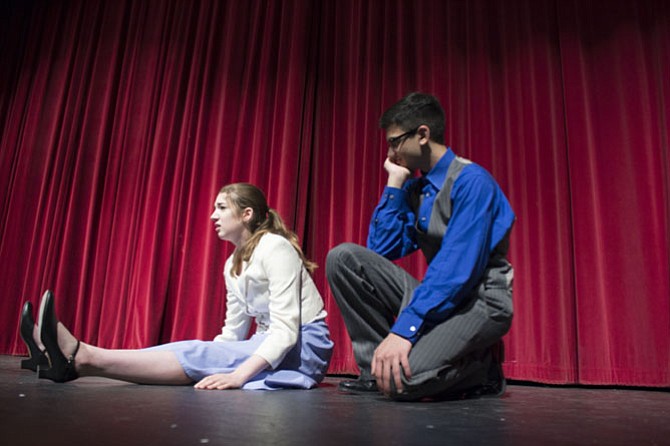 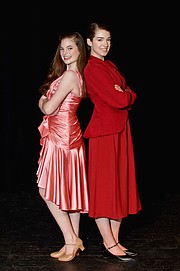 Although showgirl Miss Adelaide, played by junior Allie Lytle, 16 (left), and missionary Sarah Brown, played by sophomore Erin Maxwell, 16 (right), come from two very different worlds, they share something in common — falling in love with the wrong kind of guys.

What happens when gangsters and missionaries collide in the illegal gambling underworld of Broadway in the 1920s?

The high school will be performing “Guys and Dolls” from Friday, April 21, through Sunday, April 23, at the Herndon High School Auditorium. The musical comedy is set in New York City and follows a ragtag gambler, his showgirl fiancée, a high-rolling heartthrob and a modest missionary.

“The essential story is about finding love in the most unexpected places,” said Schklowsky. “Love is the biggest gamble. It’s not a sure bet.”

The love story unfolds between the four leads of the show, with both couples marrying each other by the time the curtain closes, despite their unlikely pairings.

Sarah Brown is a missionary who begins the show as “really rigid and then she starts to change around intermission,” said sophomore Erin Maxwell, 16, who plays the role. “It’s my favorite role I’ve ever played.”

Her character falls for Sky Masterson, who, at first, isn’t looking for love.

“He tries to get this girl for a bet, but then he realizes he has more feelings for her,” said junior Kishan Rae, 16, who plays the role.

Then there is the longtime engaged couple Nathan Detroit and Miss Adelaide.

“Nathan’s whole thing is that he’s running this underground crap game,” said senior Jordan Rees, 18, who plays the role. “He’s trying to make money for his fiancée, but she isn’t particularly fond that he’s doing it.”

This struggle creates a funny back-and-forth between the couple. But it’s also how they show affection for each other, said Rees.

“She’s been engaged to Nathan for 14 years,” said junior Allie Lytle, 16, who plays the role of Miss Adelaide.

The comedy of their bickering is amplified by Miss Adelaide’s chronic cold, which Lytle conveys by employing sneezing throughout her performance.

The musical was selected to bring a classic into the mix of a new direction for the school’s theater program, as this is the first school year Schklowsky took over the department. The first production he directed last fall was “Inspector General,” a play by Russian dramatist Nikolai Gogol.

“I wanted to balance that with something everyone’s heard of,” he said. “We also have the people to pull [‘Guys and Dolls’] off. We have a fantastic ensemble of singers and dancers and great leads to give the stage to.”

He is artistic director for this musical, only because a special guest has taken the director’s chair for this production: Evan Hoffmann.

Hoffmann is an alumnus of Herndon High School from the class of 2000 who moved on to become a professional actor and director. He is now producing artistic director of the NextStop Theater Company in Herndon.

“I feel like I could remember imagining myself as the drama teacher [back when he was a student],” Hoffmann said. “I was just so ingrained in the program. I love this theater to death.”

One change he made was constructing a new and temporary proscenium arch to frame the opening between the stage and the auditorium in the theater.

“The theater is up for renovation soon, but it was looking pretty ratty,” he said. “That’s the first thing everyone sees.”

While Hoffmann is used to working with skilled actors who are set in their ways, he said it’s been different working with the cast of this musical.

“It’s a completely different thing to talk and see 50 sets of eyes zero in on me,” he said. “It’s a bunch of kids who love theater so much and are eager to learn and do it well. This is the biggest project of the year for them.”

Tickets are $15 per person. More information can be found online at www.herndondrama.org.