Rip Sullivan speaks out against GOP manipulation of voter districts. 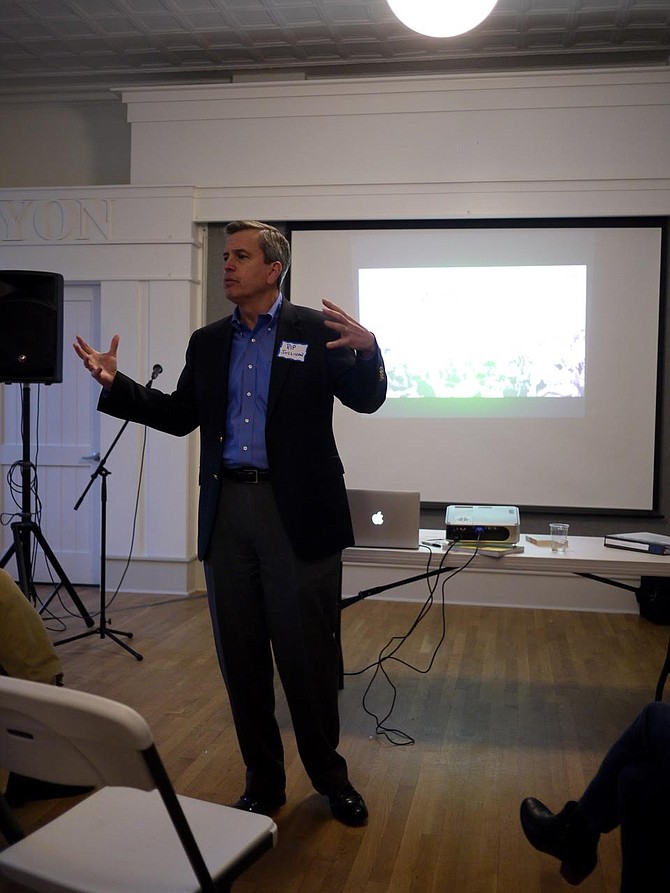 Del. Rip Sullivan addresses the We of Action Virginia meeting on April 3 at the Lyon Park Community Center. Photo by Eden Brown.

Del. Rip Sullivan (D-48) said “We are running a hundred different elections,” when he addressed the “We of Action Virginia” group on Monday, April 3 at the Lyon Park Community Center. He said the Democratic party is trying to think out of the box. “We have candidates in deep red parts of the state. We want to support them.”

Sullivan underlined the importance of the upcoming elections in November for local residents, even if their own delegate is likely to be elected. “If I had to rattle off all the bills Gov. Terry McAuliffe has had to veto this session, they would curl your hair,” he said. “If we weren't there to veto these bills, you would see the impact right here. We will be the epicentre of the political universe this November.”

Sullivan said regardless of the outcome of the primary on June 13, determining whether Lt. Gov. Ralph Northam or Tom Perriello is the winner, Democrats will all need to kiss and make up so the party is unified in the gubernatorial race.

“Ed Gillespie is the Republican frontrunner, it is probably safe to say,” said Sullivan. “He is the architect of the gerrymandering strategy, the concept of arranging voter districts so the G.O.P. could essentially be ‘vote proof.’ This is our first chance to push back on that strategy.”

“In essence,” Sullivan said, “we are running a hundred different elections.” All 100 seats in Virginia’s General Assembly are on the ballot in November.

“In some parts of the state, it’s all about minimum wage and economic security. We are not running on Trump as single issue. We have to remind voters, who may not know, ‘What has Terry McAuliffe done for you.’”

“We are the eighth richest state in the union,” said Sullivan. “And yet we have Remote Access Medicine (RAM) clinics in this state where people show up and get all their teeth pulled.”

According to the Remote Access Medicine website, Virginia lies in the heart of the most economically distressed region of the United States. The organization’s yearly event in Wise, Va., sees thousands of local citizens who rely on the no-cost clinic for all of their health care needs.

“It’s important for us to change access to health care. And the most important thing right now is for us to just show up, as politically engaged citizens who care about gerrymandering,” said Sullivan. He cited a New Yorker article which stated that all the calls to elected representatives since November 2016 had had an impact.

“Whoever is governor of Virginia in 2021 will be the governor when the the lines of districts are redrawn,” said Sullivan. “You know the technology is so good that a computer can change one input on the map, move the line across the street, and change the outcome of the election. We need to start fighting against this.”

Sullivan encouraged the group to engage, focus on the website Virginia 2021, tweet regularly, and also get on the vpap.org website to see what they can do to improve the chances of their candidates getting elected to the Virginia Assembly in November 2017. For more information, visit www.Virginia2021.org and www.vpap.org.