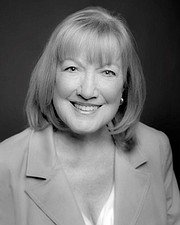 Many remember the endearing little books crafted by Beatrix Potter. The adventures and misadventures of young Peter Rabbit in “The Tale of Peter Rabbit” as he is chased around the garden by Mr. McGregor have entertained children since 1901. Although Potter’s written and illustrated children’s books and merchandise have captured the imaginations and hearts of generations of children, it should also be noted that her life was multi-faceted. Not only was she a writer and businesswoman, she was a natural scientist, preservationist and conservationist — all unlikely for a woman who lived during the Victorian Age.

The Potomac Village Garden Club and the Friends of the Library, Potomac Chapter will present author and Beatrix Potter authority Linda Lear to discuss “Beatrix Potter’s Gardens: From Imagination to Preservation.” The discussion will center on Potter’s life, books, illustrations and influence from the gardens of the Lake District. Lear is the author of the award-winning book “Beatrix Potter: A Life in Nature.” The free presentation will be held at the Potomac Library on April 25 at 7 p.m.

“‘Beatrix Potter: A Life in Nature,’ began quite by happenstance,” Lear said, “while I was on book tour in the UK in 1999. There I discovered her botanical illustrations, her collateral interest in mycological science. I realized there was much more to this Victorian children’s writer than I had ever imagined and children’s books were only the beginning. This book took eight years to prepare. It won the Lakeland Book of the Year prize in 2007, the most prestigious of England’s regional literary prizes, the first time ever given to an American writer.”

“The most interesting thing I discovered when writing this book,” Lear said, “was that her ability to observe was nothing short of extraordinary. It impacted everything she did: art, story, science, sheep raising and conservation. This ability to observe was central to her being and to her accomplishments. She wanted to make something of herself other than being a ‘decorative’ lady of the upper middle class.”

Lear was born in Pittsburgh and now lives in Avenel in Potomac. She graduated from Connecticut College and completed her graduate work at Columbia University. She had a career in college and university teaching but her fellowships at Yale’s Beinecke Rare Book Library and at the Smithsonian Institution helped her to “redefine myself as a fulltime writer.”

An interest in Pittsburgh native (and Maryland resident) Rachel Carson and her life and writings inspired her to write her first biography of Rachel Carson — “Rachel Carson: Witness for Nature” published in 1997 by Holt and republished in 2009 by Houghton Mifflin Harcourt. This biography was awarded the prize for “Best Book on Women in Science” by the History of Science Society for 1998. Lear was consequently selected to write introductions for all of Carson’s works and an afterward for a hand-bound folio edition of Carson’s first published essay, “Underseas.”

“Writing about Carson gave me a chance to give voice to someone whose work reflects what a single individual can do to bring about change, to understand the origins of the contemporary environmental movement and to be immersed in the prose of one of the best nature writers of the 20th century,” said Lear.

Additionally, Lear writes op ed articles for the New York Times, frequently lectures on Carson and Potter, and serves as a Trustee Emerita on the Board of Connecticut College in New London, Conn. In 1999, she was honored with the Goodwin-Niering Center Alumni Environmental Achievement Award and has donated her manuscript materials to establish The Lear/Carson Collection and the Lear/Potter Collection. In 2008, the Linda Lear Special Collections and Archives in the Shain Library at Connecticut College was dedicated. She donated all of her materials collected for the Potter biography as well as her Victorian card collection to this Library Room which is open to the public as well as to students for research.

She was awarded an Honorary Doctorate of Humane Letters from Chatham University (Carson’s Alma Mater) in 2007; and the Connecticut College Medal in 2013, the highest honor the college bestows for her work on women and the environment. Lear also serves on the Board of the Washington Independent Review of Books.

Lear has traveled to Great Britain to view all the places Potter lived and the environment that she so loved and sought to preserve. As a member of the Beatrix Potter Society, Lear seeks to continue the legacy of Beatrix Potter who is, as she describes her, “regarded by Brits to be nearly as important as the Queen.”