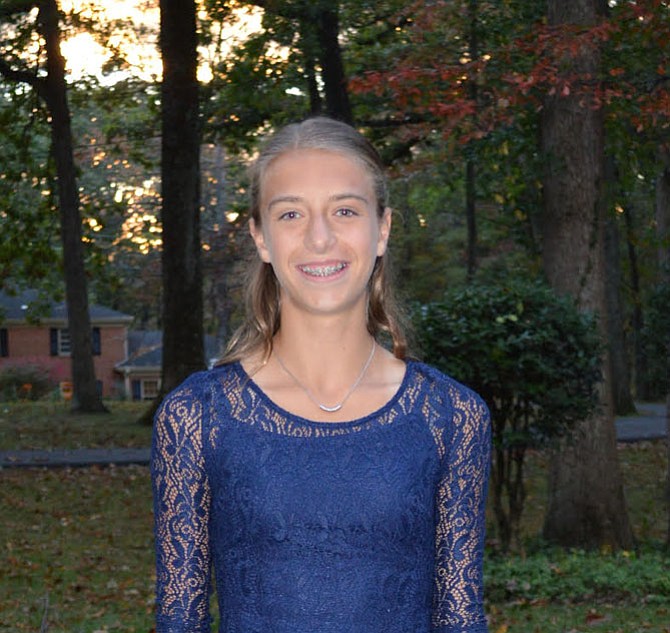 Author Sophie Tedesco, a ninth-grader from Marshall High School, will speak at the GFWG Youth Writing Awards Gala at 4 p.m. on April 29 at the Great Falls Library. Photo by Heather Tedesco

A famous author’s story about personal struggle inspired a local teen to write and publish her first book, and now she nudges others her age to share their stories, too. Sophie Tedesco, a ninth-grader at Marshall High School, will be the guest speaker at the Great Falls Writer’s Group 2017 Youth Awards Gala.

“People my age have great imaginations and great stories, but many struggle to write and produce something,” she said. Her message to other writers is to find time necessary to meet writing goals.

As a seventh- and eighth-grader at Longfellow Middle School, Tedesco participated in National Novel Writing Month and wrote a 40,000-word novel that she self-published titled “Holding On.” The book is about a high-school boy who tried to rescue his sister. Writers who reached a word-count goal received two free copies of their books. Motivated by that, Tedesco spent lunchtime in the library writing.

“Having that goal helped me go the extra mile,” she said.

In addition to writing novels, the avid reader crafts short stories, experiments with poetry, and explores journalism with her school newspaper. She is inspired by reading and people she meets.

As a fifth-grader, Tedesco wrote to Louis Zamperini, a former Olympian and World War II prisoner of war whose story was portrayed in Laura Hillenbrand’s book and movie, “Unbroken.” Zamperini responded through his daughter, and Tedesco corresponded with the famous author until his death in July 2014.

“He wrote a final novel before his death, and I was mentioned in the acknowledgements because of the relationship we had,” said Tedesco about the book, “Don’t Give Up. Don’t Give In” by Louis Zamperini and David Rensin. Sophie says the relationship with Zamperini helped shape who she is today.

“I hope I push other writers to finish their stories,” Tedesco says. “I was always writing little things, and I didn’t finish. See a project through to the end.”

An active member on her school’s debate and cross-country teams, Tedesco’s options and eyes are wide open to professional possibilities in all fields, but she’s adamant that writing will always be part of her life.

Tedesco speaks at the Youth Awards Gala at 4 p.m. on April 29 at the Great Falls Library, 9830 Georgetown Pike.