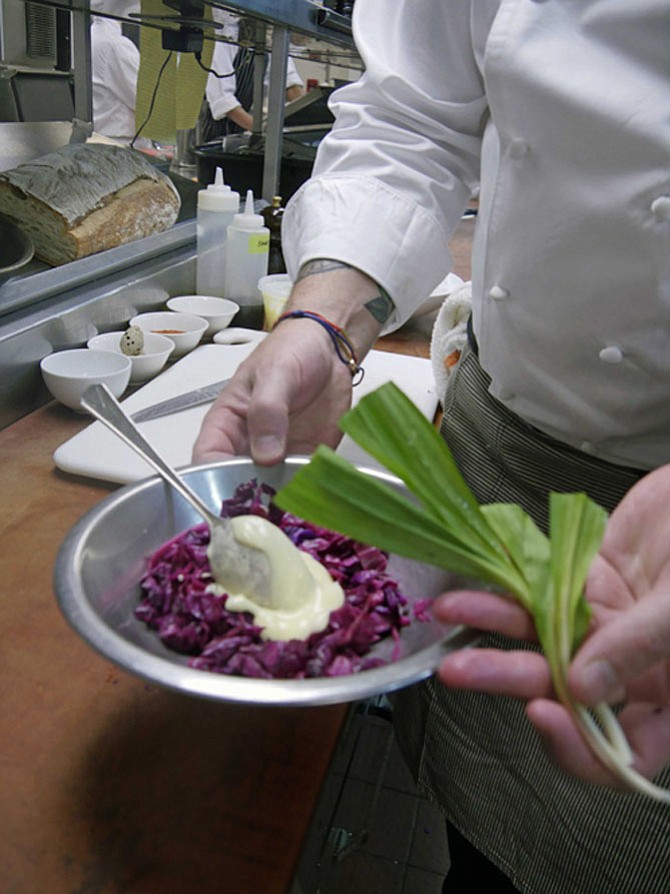 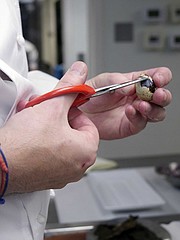 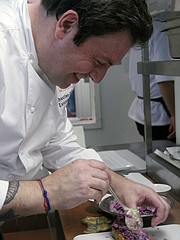 Chef Sebastien Rondier pulls the braised short ribs out of the oven where they have been braising four hours with red wine, veal stock and aromatic garnish including carrots, onions and leeks. He cuts a thick slice of rustic bread and brushes it lavishly with fresh rosemary, thyme, canola oil and garlic. "I smash the garlic with the flat side of a knife." He uses canola oil because it is neutral and, "I want the garlic flavor to come out."

Rondier has sliced a wedge of purple cabbage into thin ribbons, added salt, and drizzled on a little sherry vinegar. He lets it sit over night to draw out the moisture. Rondier dips out about a tablespoon of homemade mayonnaise and mixes it into the cabbage, then tosses in bright green, finely chopped spring ramps. "It's good for the season."

In goes black pepper — "I'm a big fan of pepper." Then a little pinch of the reddish espelette pepper "which in Basque cuisine replaces back pepper. I use them both."

Rondier has been the head chef at Brabo at 1600 King Street for two months. He says he would describe his new menu as European with influence from Southwest France where he was born, the mussels from Belgium, and the octopus with hummus from the Riviera. "This is one of the best sellers. Ten years ago nobody would have touched octopus."

He uses a lot of local ingredients — chicken and vegetables from the Amish, cheese from Vermont and microgreens from a special farm. "In France organic is a priority with all of the local markets, and people have access to fresh fish and meat every day."

He gingerly picks up a small quail egg and slowly cracks around the edges.

"Quail eggs are very fragile and also expensive. I use them for presentation. But," he said, " I try not to break so I make an omelet." Three quail eggs are slipped into a small skillet where they run together yolks unbroken with a little Extravergine di oliva. "I like it a lot. Olive oil can be very expensive and you don't always need that. So I just leave on the flame for about two minutes. I like a little crust on the bottom. "

"Now I am ready to assemble the Country Crostini. It is an appetizer that can be easily shared." Rondier cuts the large slice of grilled rustic bread diagonally into three pieces and places them side-by-side on a long diagonal plate. The purple cabbage forms the bottom layer on each piece of bread.

Next he places a nice portion of the short ribs and pours on a little of the braising liquid. Finally he cuts the three quail eggs apart into individual portions and tops each section. To finish it off, he takes strips of beef jerky and artfully tucks them between the bread. The plate is edged with spring mix — not micro greens but small. "I love these."

"I cooked this beef jerky at 250 degrees overnight on a rack placed on a tray to allow the air to circulate all the time." He explains it was thinly sliced flank steak marinated in Worcestershire sauce, a lot of smashed garlic, black pepper and espelette and red wine vinegar. "You don't see lemon juice and vinegar anymore in restaurants. That's what I like to add." He says the jerky comes out “dry, but with a bite."

Rondier came to America in 2003 from a small town in Southwest France where he "was really bad at school" so he trained as a chef apprentice at 16. "My uncle was a chef. He was doing charcuterie so that's what I was doing."

He says his own favorite menu item is slow roasted veal tenderloin with braised sweetbreads. French peas with scallions and a little romaine accompany it. Also a splash of sherry vinegar. The gnocchi that rounds out the plate is made with Yukon gold potatoes with veal sauce, a reduction of cream and, of course, and a little dot of lemon juice.