Candy wasn’t the only thing waiting for children to find when they opened the eggs they found on Sunday, April 9; Adeler Jewelers hid gemstones in 800 of the 8,000 eggs 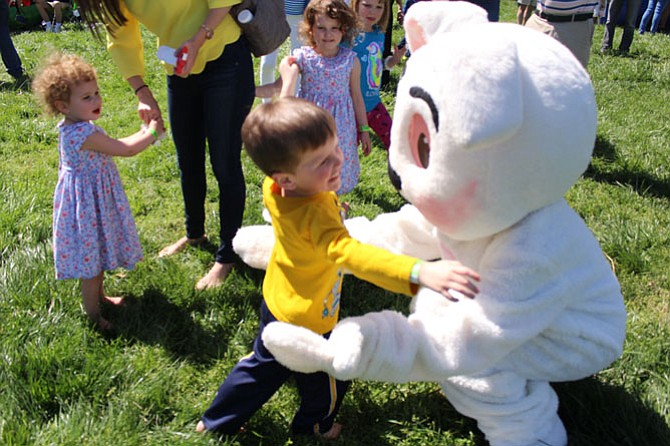 Conner Donlon, 3, of Reston gets a hug from the Easter Bunny at the Great Falls Annual Children’s Spring Festival.

Children aged eight through 10 are unleashed for the egg hunt. Kids were organized into age groups throughout the village green and simultaneously released to search for 8,000 eggs.

snatched up all the pastel-colored treasures. Sunshine and temperatures in the 70s drew them and their families to the Great Falls Village Centre for the Annual Children’s Spring Festival and the spring rite of passage: An egg hunt.

“It took 40 volunteers four hours to fill 8,000 eggs and they’ll be gone in less than a minute and a half,” says Jorge Adeler, owner of Adeler Jewelers, which sponsored the event.

Chocolate and candy weren’t the only things waiting for the kids to find when they opened their bounties on Sunday, April 9.

The Adelers also hid gemstones— like tourmaline, pearl, blue topaz, garnet and opal— in 800 of the eggs, according to Wendy Adeler, Jorge’s daughter.

This was the 33rd year the spring event was held. 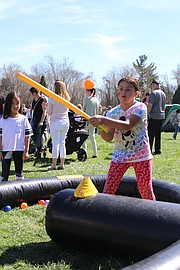 Graciela Johannes, 6, of Sterling plays one of the festival games by whacking whiffle balls as they shoot up from a cone.