McLean — People gathered at the American Legion Post 270 in McLean on Wednesday, 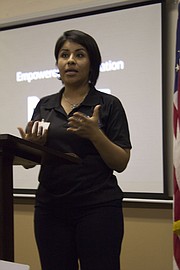 Grelia Steele of the Fairfax County Office of Emergency Management talks to the crowd about creating an emergency preparedness kit.

March 29, to learn how to prepare for emergency situations.

The event convened a panel of experts including:

WHILE THE FIRST PORTION of the panel focused on how to safeguard businesses, including investing in business continuity plans and insurance policies, the panel also discussed the realities that face the region.

“Because we’re right next to the nation’s capital, we are prone to terrorism,” Grelia Steele of the Fairfax County Office of Emergency Management, said during the panel.

Since the area is a part of the national capital region, the group’s assessment also identified other threats: pandemics, cyber attacks, terrorism and chemical, biological, radiological, nuclear and explosive materials.

The plan identifies 448 critical and historic assets in Fairfax County alone that could be targeted.

The Fairfax County Board of Supervisors will vote on whether to adopt the updated plan at its next meeting on Tuesday, April 4, after deadline for this newspaper.

AFTER BUSINESS AND GOVERNMENT safety preparedness were covered, Steele urged the audience to take steps to safeguard their families during emergency situations. One thing families can do is create an emergency preparedness kit, she said.

“Make sure you have materials to keep you going for 72 hours, the materials you use every day,” Steele said.

Brown also urged the audience to use a resource his department helped create: www.readynova.org.

“If you get on this website, it will actually walk you through building a plan,” Brown said.

The site features plans that are tailored for families, businesses and faith communities.

The audience was also encouraged to sign up for Fairfax Alerts at www.fairfaxcounty.gov/alerts.

TO FINISH THE PANEL, Special Agent J. Michael Talbot of the FBI Washington Field Office talked to the gathering about how to respond to active shooters.

“I do not like that word anymore or that name: active shooter,” Talbot said during the meeting. “If I had anything to do with it, I would change it to active killer.”

His reasoning for his terminology is that perpetrators of these incidents are killing people with knives, cars and bombs and not just guns.

“Their intent is to kill as many people as possible and they usually don’t care if they live or die,” Talbot said.

Talbot said that people dealing with these situations have three options: evacuate, hide or take action. While the third option is of last resort, he says it is better than negotiating.

“I don’t care who you are, you actually now have advantage over the shooter because the shooter is not going to expect any one of you to take the fight to him,” he said.