The Louder The Better at Percussion Works
Votes

The Louder The Better at Percussion Works 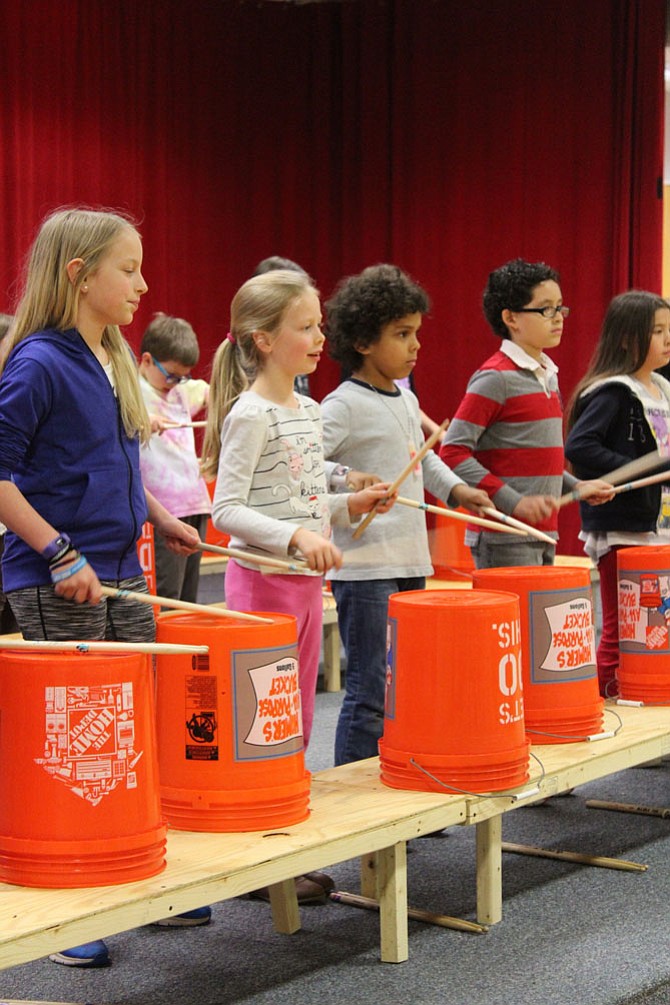 Bucket drummers from Herndon Elementary School perform for family and friends. The program was designed to reach everyone at a universal level. According to Laura Readyoff who founded the program at Herndon and Clearview Schools, percussion is something everyone can participate doing, no matter the educational background or skill set.

Mathew Foehrkolb sat front and center to watch his daughter Grace, 7, perform. Asked what his reaction was when Grace asked if she could join a drum class, Foehrkolb replied, "My first reaction was to say, not at home, right?" Grace had been in dance before. "She had good rhythm. I thought this might be a good way to get some energy out."

Laura Readyoff is the owner of The Music Loft in Herndon. She developed Percussion Works in 2013. According to Readyoff, after she put her thinking cap on, she spent considerable time trying to come up with a music program that might eventually reach all children in Herndon.

Readyoff had a list of criteria. The program had to incorporate only one form of music. It had to be something all students, including those with special needs and those for whom English is a second language, would be successful doing and enjoy. It had to build life skills such as cooperation, respect for others and the ability to work in a group. It also had to enhance academic performance in the classroom, the development of language and math, as well as fine and gross motor coordination. On top of that, there had to be no reading of notes.

Readyoff came up with the idea to promote the art of bucket drumming. The buckets would be inexpensive and they offered a bit of “street credibility.”

She offered the course in free afterschool programs funded by a grant from the Nelson J. and Katherine Friant Post Foundation to Arts Herndon.

"Every child can play a bucket with sticks,” Readyoff wrote in a press release. “Percussion Works would provide high-caliber learning opportunities and fun for all,” she said.

According to Readyoff, initially, the pilot program was only for second and third graders but she had to revise her business plan and extend the program into the upper grades. "The kids didn't want to give it up. They were heartbroken," Readyoff said.

Brooke Taheri from Clearview can attest to that. Before the performance began, Taheri said, "This is my fourth year in percussion."

"It's about inclusion," Readyoff said. "Students can join at any time.”

Readyoff and teacher Kyla Wilcox take 30 children per class. Asked about classroom management for a group of children holding sticks Readyoff said, "For those that need a special outlet to shine, I give them something very specific to do, so they are focused on the task."

For their finale, Readyoff announced the children were going to teach the audience a “body percussion” song. The children jumped off the stage. Under Readyoff’s direction, they rubbed their hands together to make a sandpaper sound. They dragged their shoes over the floor to make a scraping sound and clapped their bodies to create different timbres of sounds. In the end, the parents and children all were laughing.