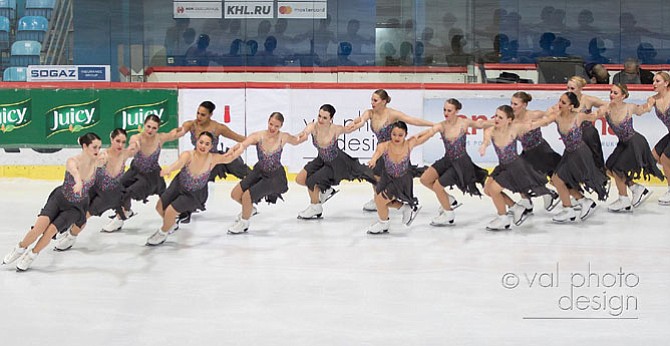 The Skyliners and LaDan Nemati (third from the right in front row) skating the pivoting block element in Croatia. Photo Courtesy of LaDan Nemati 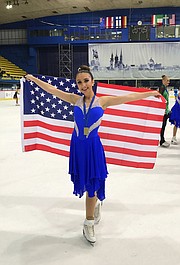 LaDan Nemati holding the American flag in Croatia after winning a gold medal.

Ever since Arlington student LaDan Nemati was a little girl, she wanted to do synchronized skating for a top-level team and represent Team USA in international competitions. Now 17, she’s already reached that goal — and with flying colors.

She’s been skating 10 years; prior to 2016, she skated competitively with Team Ashburn for three years and then with Team Delaware for two years. Then in March 2016, she decided to try out for the Skyliners team in New York.

“I wanted to compete internationally, and the only two teams doing that on the East Coast are the Skyliners and one in Massachusetts — which is too far away,” said Nemati. “New York is still far, but manageable. A hundred girls tried out for 20 spots, so I wasn’t expecting anything. But when I got on the ice, the coach saw the potential in me and I was accepted.”

Pre-season practice began that April, once every two weeks in Stamford, Conn., so her parents drove her back and forth until practice ended in June. After a July break, the team held a one-week boot camp in August at Lake Placid, where the girls skated all day.

“I wasn’t used to these coaches’ coaching styles, and they expected us to pick up new choreography immediately and be able to skate on a world-class level already, which was stressful for me,” said Nemati. “It took me a while to adjust, but it made me into a much stronger skater, physically and emotionally. I’m able to take criticism better and my skill levels improved.”

Before being on the Skyliners, she said, “I didn’t have a chance to skate on such a high-level team where so much is expected of you. So overall, it was a good experience for me.” Nemati is a senior at Bishop O’Connell High and, once school began in September, she practiced with her team Fridays for 2-1/2 hours, Saturdays, five hours and Sundays, six hours. Competitions started in November and ran through the end of February.

“It was really difficult balancing school and skating,” she said. “But my school scheduled all my AP classes in the morning — with electives and easier classes in the afternoon — because on Fridays, I had to leave early to catch a train to Connecticut for practice. During the week, I’d do a lot of my homework in the library at lunch; and on Fridays, I did some more during the six-hour train ride.”

After Friday practices in Connecticut, the teams practiced Saturdays in Monsey, N.Y., about an hour away, returning Sundays to Connecticut to practice until 8:30 or 9 p.m. Then Nemati took the train home to Fairfax, arriving around 3:30 a.m. and waking up at 6 a.m. to go to school.

As if that weren’t enough, she also teaches group ice-skating classes Monday afternoons at Reston SkateQuest. Tuesday, Wednesday and Thursday, she practices solo there; and twice weekly, she takes ice-dancing lessons with her private coach. “Ice dancing is an important part of synchronized skating because it deals with edges, knee bends and posture, which you use on the ice,” said Nemati.

The 20-member Skyliners vied in five competitions this year. One of them, the end of January, was in Salzburg, Austria. “It was called the Mozart Cup,” said Nemati. “We competed against a lot of tough teams — including Finland and another U.S. team, which was our main competition. They were college girls from Miami of Ohio University. The Skyliners are ages 15 through 24, with our average age 17-18.”

The 10 teams participating did both short and long programs. The short one is just 3 minutes but, said Nemati, “It’s jam-packed with five skating elements, so you have to work hard to get them all in, in a short amount of time. And our music was Sia’s version of ‘California Dreamin’ from the movie, ‘San Andreas,’ so it was very intense. Our coach choreographed it so we’d show a lot of power and passionate interpretation of the song.”

The long program is about 4-1/2 minutes, so it contains more elements. “But it’s easier because you have more time to complete them and really express yourself,” said Nemati. “You can show blocks, circles and lines, plus extensions of your arms and legs. We did an upbeat medley of Whitney Houston songs that were really fun and got the audience on their feet.”

She said they’d been preparing and were ready. “But we were a bit nervous, so we held back a little and got third place, behind Finland and the other U.S. team,” said Nemati. “But it was good motivation for our next international competition in Zagreb, Croatia.”

The week-long event in mid-February saw 10 teams vying for the Zagreb Snowflakes trophy. Germany and Hungary were the main competitors, and the teams performed the same programs they had all season.

“We improved our scores a lot and felt more confident,” said Nemati. “We skated our best and ending up winning. It was by only half a point, but we still ended up on top and it was an amazing experience. We each won gold medals, and the team won a trophy. Germany was second and Hungary, third. It was one of the best experiences of my life.”

At the start, she said, “When the announcer says, ‘Representing the United States of America’ over the loudspeaker, I knew I had a huge job to do. But I was motivated to go out and do my best and show the judges why we were there and why we were Team USA. Then, at the medal ceremony, they put up the flags of the top three teams and played the winner’s national anthem. Hearing that on an international stage was really fulfilling and gave me a huge amount of satisfaction.”

That ended the international-competition season, so the girls returned home. But after a day-and-a-half, they flew to Rockford, Ill., for the 2017 Nationals. The Skyliners came in third, but beat the other U.S. team that they wanted to beat in Austria. “It was only by one-tenth of a point, but it was a huge accomplishment,” said Nemati.

Now, she’s focused on finishing up the school year, graduating and attending UVA in the fall to possibly major in economics or business. On March 18-19, she tried out for the team again — and made it — but then decided not to accept. Instead, she’ll concentrate on her solo ice dancing.

Although it was tough going to practices on weekends while her friends were out having fun, Nemati has no regrets because it was her choice. “I also like serving as a role model for younger girls who’d like to follow in my footsteps, but don’t think it’s possible. I want to show them they can follow their dreams and achieve them.”