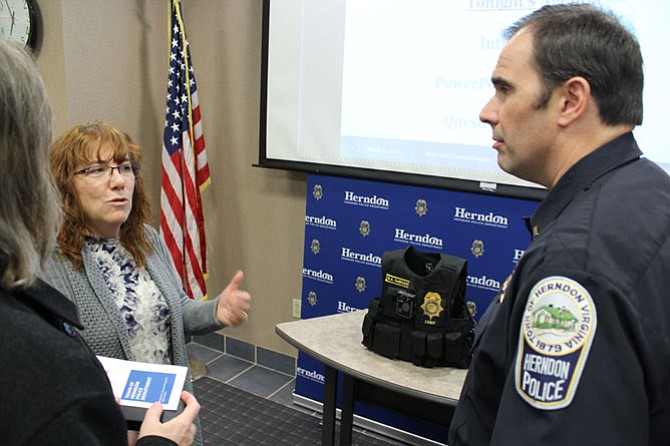 Town of Herndon resident Lorna Schmid and her husband David Boldt ask Lt. Steve Thompson of the Herndon Police Department questions about how the officers will be using the cameras. The model of camera that will be used, a Panasonic Arbitrator Body Worn Camera, was on display and will be worn by officers on their vests. Photo by Fallon Forbush.

Herndon — All police officers in the Town of Herndon will be using body cameras by May.

The bodycams, Panasonic Arbitrator Body Worn Cameras, were unveiled at a public forum by Herndon’s Chief of Police Maggie DeBoard on Thursday, March 30.

At the forum, DeBoard explained the policy that will guide the use of the cameras, which officers must turn on manually to record.

“People think that once an agency has a body camera program, it solves all of the problems in the world,” Herndon Chief of Police Maggie DeBoard said at the meeting. “Cameras generally don’t always answer all the questions that may occur during the course of an interaction in the public. We look at those cameras as simply having an additional tool for accountability and efficiency out in the public.”

The officers are not required to notify the public that they are being filmed, but the public should expect that they are always being recorded. This is because the police department’s policy calls for it.

OFFICERS are required to activate the body-worn cameras when they are providing police services to the public. These mandatory actions include traffic stops, calls for service, arrest situations and searches.

“Every patrol and motor officer will be wearing them on a day-to-day basis,” DeBoard said.

The police department’s policy only gives officers a few situations when they are not to use the bodycams while they are interacting with the public.

Another is when victims or witnesses of a crime ask officers for privacy.

“We’re giving them some leeway to make good judgements about how they handle those sensitive situations,” DeBoard said.

Police officers will need to explain if their bodycams are ever deactivated for any other circumstance.

“If there is any other time when they intentionally deactivate [their bodycams] during a call, they have to justify why they did that,” DeBoard said.

Supervisors will be conducting monthly audits to ensure officers are following the policy. These supervisors will also be audited every three months.

“That accountability really works on both sides of the camera,” DeBoard said.

DeBoard told the audience that she hopes the bodycams will help the department capture criminal events to use as evidence in court. She also expects the cameras to accurately document actions of police pursuant to criminal investigations.

“We spend a lot of time working complaints [about officers] that we could very quickly clear up if we had more information,” DeBoard said.

DeBoard started seriously considering bodycams for her officers two years ago and decided that the department needed other video enhancements first.

LAST SUMMER, the department replaced its interview cameras at the police station and all its vehicle cameras. The body cameras were the final step in the department’s video upgrade, according to DeBoard. And they are all integrated.

“The bodycams aren’t expensive, but the storage of the video is,” DeBoard said.

A bodycam pilot program was implemented at the end of last year. With two officers using cameras per shift, 457 videos at a total of 92 hours were captured.

“You can imagine the number of videos that we will be capturing once we deploy these out, even at a small department,” DeBoard said.

The Herndon Town Council approved $71,000 of new funding for the bodycams in its fiscal year 2017 mid-year budget on Feb. 14.