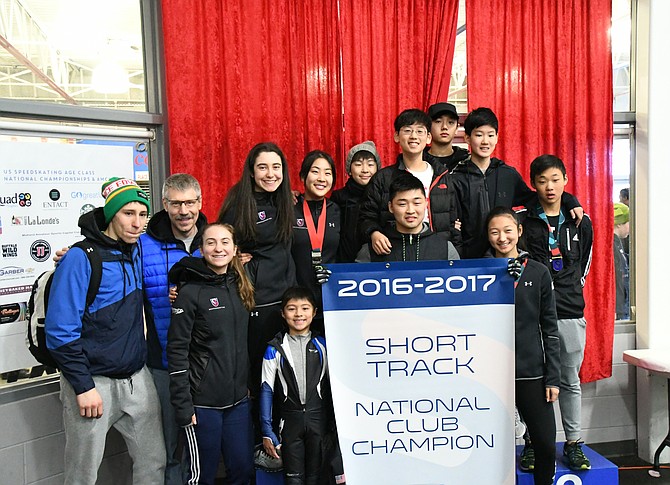 Members of the Potomac Speedskating Club. Photo by Jackie Choy

Based in the suburbs of Washington, D.C., the team practices at Wheaton Ice Arena and Cabin John Ice Rink. Potomac previously won the national club championship title in 2012 and was runner-up last year. The title is awarded to the club whose skaters earn the most points at Age Group Nationals.

Returning national champion Brandon Kim, of Fairfax, Va., broke his own national record in the 500 meter in the Junior C Men's division, for 13- and 14-year-old skaters. He now holds national records in all four distances in the division: 500 meter, 777 meter, 1000 meter and 1500 meter. Last December, Kim won first place overall among men at the 2016-17 U.S. Short Track Junior Championships in Kearns, Utah. Kim also competed at the World Junior Short Track Championships in Innsbruck, Austria, in January, 2017, where he won a bronze medal in the 3000 meter relay, setting a new U.S. junior record.

Together, Choi and Kim set five of the seven new national records made at the U.S. Short Track Age Group Nationals, which took place at Midland Civic Arena.

The team was led by Head Coach Simon Cho, who joined Potomac in May 2016, following a career as a short track speedskater. Cho won a bronze medal in the 5000 meter relay in the 2010 Winter Olympics and was the 2011 World Champion in the 500 meter.

Other results from Potomac skaters include:

To be eligible to compete at nationals, skaters must earn a qualifying time that is less than 120 percent of the current national record in any distance in their age division. More than 160 skaters from around the country raced in the event.

In addition to the 14 skaters who competed at Age Group Nationals, Potomac members Aaron Heo, Shaner LeBauer and Roen Riehl competed at the American Cup III competition, also held at Midland Civic Arena the same weekend, finishing 2nd, 3rd and 14th overall, respectively. American Cup III is one of a series of races used to determine overall national rankings for the season and to qualify for selection for the U.S. World Cup Team and the Olympic trials.