Ballad of the Arlington County Budget 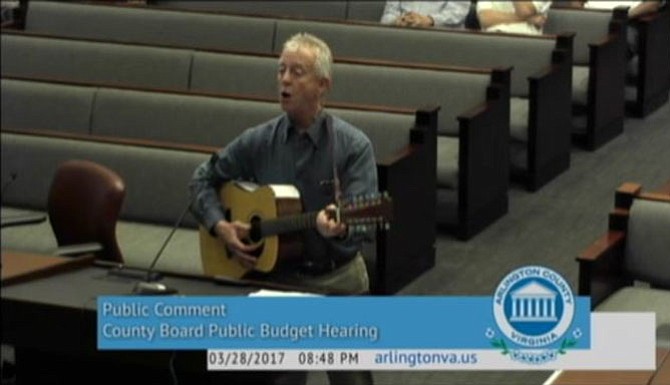 Jeffrey Liteman sings his budget petition to the County Board. Image from County Board video

“Please continue to support funding for the Lee Highway Alliance. We believe in the alliance and the work it’s doing.” — Chenda Lee, Pastor, United Methodist Church

After nearly two hours, budget hearings can start to get a little dull. More than 50 speakers had already petitioned the County Board on March 28 for different issues across the county, from asking that the county fully fund the Arlington Public Schools’ (APS) budget to asking the county to stop all funding to the Metro. The audience had dwindled down from a full room to a few citizens left carrying signs in support of different projects.

And then Jeffrey Liteman pulled out his guitar and sang:

“Over in Glencarlyn we have a library

And each Friday and Saturday there’s always much to do

Liteman, with perhaps the first sung budget proposal in county history, was one of several citizens who showed up to ask the County Board not to cut the hours at the Glencarlyn Library. The cut is one of $11.1 million in budget cuts to halve the potential tax increase from two cents to one.

For Barbara Kubinski, the Glencarlyn Library is the easiest to use in the county as a senior citizen. Kubinski praised the convenient parking and thorough access in the building for seniors with mobility issues.

Members of Arlington’s Community Services Board (CSB) urged the County Board to consider several much needed improvements to the county’s mental health care. Frank Haltiwanger, recently retired as principal of HB Woodlawn and a member of the CSB, asked for the approval of 2.2 additional case managers for Arlingtonians with developmental disabilities. According to Haltiwanger, $200,600 of the $230,000 requested would be offset by medicaid reimbursements, so the net cost to the county would be less than $30,000.

“Without additional positions,” Haltiwanger said, “the quality of services will suffer with increased caseloads.”

Cherie Takemoto, a member of CSB and mother of a 28 year old with the rare genetic disorder Costello syndrome, said that caseloads are expected to rise by 15 percent in FY2018.

“The current caseload of 34 [per case manager] will rise to an unmanageable 39,” said Takemoto. “That’s already well above the national standard of 25 to 28.”

Several mothers addressed the County Board to remind them of the human lives impacted by inadequate mental healthcare. Denise Garcia spoke in support of a $75,000 study requested by CSB to determine what services can be provided for young adults on the autism spectrum. One of her sons is preparing to graduate from Yorktown High School and is planning on going to George Mason University. Garcia said he was forced to attend a different high school every year and went through three different middle schools. Her other son was hospitalized twice and was sent to Utah for treatment, and still struggles with periodic setbacks of getting stuck and shutting down.

“Department of Human Services is not appropriate for him,” said Garcia. “It’s meant for adults with mental health issues, like schizophrenia or bipolar disorder. It’s important for this county to provide appropriate services for young people.”

Florence Jones. Ginny Conroy, a friend of Jones who works in mental health care, read Jones’ message to the County Board after Jones became concerned that she would be too emotional to get through it.

Jones’ son is 19 with high functioning autism, but also struggles with severe emotional problems and selective mutism. He graduated from Yorktown, but according to Jones he would not receive support from Arlington County because he wouldn’t ask for them. Now, Jones says her son refuses to leave the house and doesn’t speak to anyone. Jones says she made calls to the mental health hotline, but said they could not help because he was not hurting himself or others. On one occasion, Jones said a county employee told her to kick him out of her house. After being taken to the Virginia Hospital Center, Jones says her son is in worse shape than ever, with no follow-up support.

Conroy spoke afterwards to emphasize Jones’ message and to advocate for the CSB study to determine what services could help young Arlingtonians like Jones and Garcia’s children.

IN FY2017, the County Board approved $50,000 in one-time funds to the Lee Highway Alliance (LHA). According to the County Manager's Budget Message at the time, the funding was to ensure that the corridor is the focus of the next major planning effort after Four Mile Run Valley. It was noted in the funding, however, that while staff would continue to work with the LHA on activities, no additional resources were planned for FY2018.

In the County Manager’s initial FY2018 budget proposal, the LHA received $60,500 total, but all funding was cut as part of the County Board request.

Several residents and civic leaders along Lee Highway came to the event to protest $60,000 cut of county funding to the Lee Highway Alliance.

“Please continue to support funding for the Lee Highway Alliance,” said Chenda Lee, pastor of the United Methodist Church on Lee Highway. “We believe in the alliance and the work it’s doing.”

Representatives from several civic associations affiliated with Lee Highway urged the County Board to reconsider the funding.

But for several citizens, the budget is already too bloated and the existing tax increase is too much.

“I feel like I am here representing the taxpayer,” said John Schoenecker from the Fiscal Affairs Advisory Commission. “Throughout this process, whenever you’re asked for more money, ask yourselves … is it worth squeezing the cost of daycare? For [a daughter’s] college education, and the fact that she might lose her job under Donald Trump’s budget? Is the next dollar worth that?”

“[You’re asking us] to give employees a $3 a quarter pay raise,” said Schoenecker. “I’m sure most employees are great, but with all due respect, that’s not a serious budgeting process.”

Schoenecker wasn’t alone. At another public budget hearing on March 30, several citizens showed up to protest the tax increase.

“I’d be a little embarrassed to be trying to raise my own pay while raising taxes on ordinary Arlingtonians,” said Gary Lakowski, criticizing the County Budget’s proposed pay increase for County Board members. “It sends a signal about how we value the money of people in Arlington.”

Final adoption for the County Budget will be on April 22, where many Arlington citizens are hoping, as Liteman sang:

We hope you’ll do the right thing and that you won’t try to fudge it.”