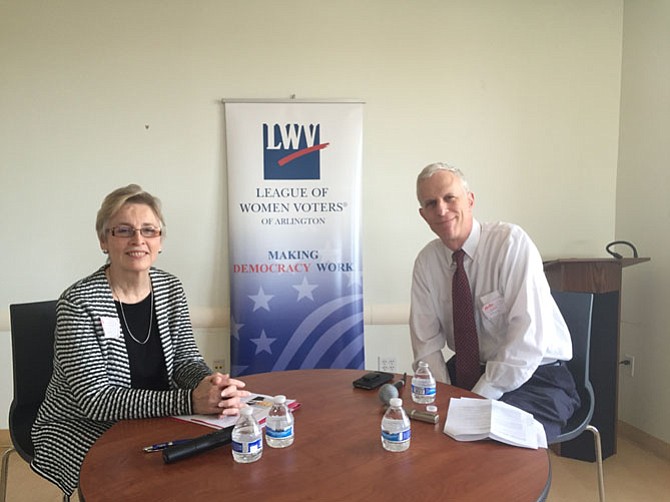 Nancy Tate (left) from the League of Women Voters and moderator of the discussion with County Manager Mark Schwartz. Photo by Vernon Miles.

It is chaos across the Potomac. In the first few months of the Presidency of Donald Trump, the political battles waged over the last few years have showed no signs of abating. With the federal budget process underway and massive cuts proposed by Trump, how the budget affects Arlington remains in question. On Sunday, April 2, County Manager Mark Schwartz spoke to the League of Women Voters about what sort of impacts those cuts could have on Arlington and how other battles have affected the county’s ability to provide services.

“The total federal footprint on the budget is $60 million,” said Schwartz, saying the largest items were between $15 and $14 million for social services. “It’s a significant amount of money, but a small piece of the budget.”

Still Schwartz noted that the federal funding could put programs like Women, Infants and Children (WIC) nutrition program and the Housing Choice Voucher at risk.

“These programs help people find places to live, that would be a big impact,” said Schwartz.

The proposed elimination of the immunization program from the Department of Health would also have a major impact on Arlington, according to Schwartz.

Schwartz also noted that it was too early to make exact predictions about how the national budget will impact the locality. The President’s proposed budget must still gain congressional approval and Schwartz said he was skeptical about that.

Some in attendance were wondering if the increase in spending for the military might have a positive impact on Arlington by bringing back jobs lost from base realignment. Schwartz said it was possible, but unlikely.

“It’s not really a budget,” said Schwartz. “It’s a thin document, and the increase in military spending is national. It’s unclear how that will manifest. Arlington has always benefited from its proximity to the federal government and the military. Would it be good? It would offset some job loss. But it’s still unclear what impacts it would have.”

Schwartz also said as county manager he was wary of hoping too much for the government and military jobs to return after Arlington had been burned before by their loss.

“In Arlington we’ve been trying not to be so reliant on the federal government … but we’ll take anything that came out way.”

But for Schwartz, the biggest impact the Trump presidency is having on Arlington isn’t in the budget, but in relations between the county government and the immigrant community.

“There is nothing a locality can do to stop a federal agent with a warrant from arresting somebody,” said Schwartz. “The places calling themselves sanctuary cities … that’s just puffery. Anything we said in the past to say we can stop [immigration police] was misplaced.”

The most Schwartz says the county can do is try to mitigate the damage caused by immigration raids.

“Families are being ripped apart, and that’s unfortunate,” said Schwartz. “We must do what we can to help those families, many of whom are panicking over what to do with their kids if the parents are deported. The county is trying to help pull resources together for those offering legal and food assistance.”

In particular, Schwartz says it’s going to be important over the coming years to help immigrants understand their rights and to keep an eye on changes in ICE policies.

“ICE has said they won’t go into churches or medical offices,” said Schwartz, “But the D.C. agent in charge said to me that it could change based on what their headquarters says. The administration doesn’t have enough people to be everywhere, so they’re trying to help push fear.”

But Schwartz also warned that well intentioned citizens advocating for immigrants can also unwittingly be a part of that.

“A lot of what this administration has announced is hurting our community policing,” said Schwartz. “People who would normally be witnesses now won’t come forward. It makes [police work] that much more difficult … There are also [advocates] being less than careful about repeating stories. Fear spreads on both ends of the spectrum.”