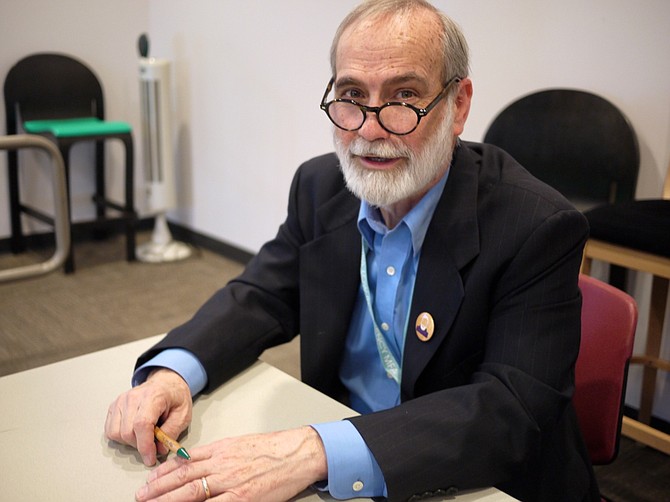 Nick Reynolds speaks about his book at the neighborhood party at the Lyon Park Community Center on April 2.

Nick Reynolds swears his “Papa-esque” beard has nothing to do with the six years he spent researching and writing about Ernest Hemingway’s time as a spy. He grew it when he turned 65, instead of getting a tattoo, a piercing, or a fancy red sports car, he says with a smile. That’s good, because Reynolds is an understated, serious historian with a full life of adventure and risk-taking behind him. The beard works with his new role as best-selling author.

Six years ago, as he was entering what he calls “a perfect part-time retirement” from a lifetime of service to his country, putting his love of history on the front burner by working at the CIA museum, Reynolds’ curiosity was piqued when he started to work on an exhibit on American intelligence in World War II. It was odd, he thought, that American icon Ernest Hemingway, his son John, and his brother Leicester all had separate relationships with the Office of Strategic Services (OSS). At that time, OSS was a small organization and the number of Americans who worked with them was even smaller. How then had three members of the same family, taking three completely separate paths, arrived at the doorstep of a secret organization? And then Reynolds stumbled on a document in the CIA library which convinced him Hemingway was in a formal relationship with the Narodnyi Komissariat Vnutrennikh Del (NKVD), the predecessor organization to the Komitet Gosudarstvennoy Bezopasnosti (KGB).

Reynolds spent the next six years researching the connection between Hemingway and the Soviets, coming to the conclusion that he had in fact said “yes” to a recruitment pitch by the NKVD in about 1941, but also worked subsequently with other, American intelligence organizations.

Reynolds is a (retired) longtime American intelligence officer, and a former U.S. Marine colonel with a PhD in history from Oxford. He wasn’t the first person to learn Hemingway had a track record in espionage. He is quick to credit the book that did: “Spies: The Rise and Fall of the KGB in America by John Earl Haynes, Harvey Klehr, and Alexander Vassiliev. But he was the first historian to examine the record with a background that enabled him to read an intelligence report and understand what it meant and to place the results of his research in the context of Hemingway’s life and work. Reynolds's new book, which came out on March 14h and has already hit two bestseller lists, “Writer, Sailor, Soldier, Spy,” paints a portrait of a man troubled, but probably unnecessarily: he was a poor spy in the eyes of the Russians, not very productive and a handling officer’s challenge. Reynolds is full of stories about some of the people who criss-cross the span of Hemingway’s interaction with the NKVD, like Elizabeth Bentley, a Vassar graduate who ended up identifying dozens of highly placed American agents who worked for the Soviets when she turned herself into the FBI in 1945.

“When I started out writing the book,” Reynolds said, “I wasn’t sure it would work out. Then when I completed the manuscript, I couldn’t find anyone to read it. I couldn’t even find an agent. These days, with the ease of sending in manuscripts on computer and the direct access people have to publishers, the literary folks are overwhelmed with things to read and usually, they don’t have time to get through the pile. You don’t even hear back from them that they received it.” But serendipity had a role to play for Reynolds: he and his wife practice Yoga at the Tranquil Space Yoga studio on Wilson Boulevard. Through Tranquil Space they got to know a woman who had worked for a downtown firm which specializes in local non-fiction authors. Pretty soon, they had a meeting with William Morrow in New York, and after a “very long day” of meetings with Morrow and others, his book was accepted.

There was still a lot of work to be done, he said with a smile. “My editor at William Morrow said that I had to put in a lot more detail. I had described a scene where Hemingway’s boat “Pilar” spots a German submarine. A fishing boat spots a U boat. And he said, ‘Nick, you have to get some details in there: what was the weather like?’ So I researched what the weather was on that day and you know, you can find that stuff out.”

Now Reynolds is on the talk circuit, having done Politics and Prose on March 18, the One More Page Books reading at Arlington Central Library on April 1, and a reading at the International Spy Museum on Monday April 3. He’s been on NPR and he leaves soon for a tour around the country, after hosting a private book party for neighborhood friends and supporters at the Lyon Park Community Center.

That’s typical of Reynolds: he and his wife Becky are enjoying the sudden success of his book, and wanted to share it. Reynolds credited her, and those who played a role in moving him to this goal: the curator of the CIA museum, the Yoga instructor, the Yale University Press book “Spies”, and of course, his agent Howard Yoon, his editor Peter Hubbard, and media relations guru, Sharyn Rosenblum. It looks as though this “writer, teacher, soldier, spy” who really prefers to stay at home in Arlington reading, donating to local charities like Arlington Thrive, rescuing dogs, or teaching at Johns Hopkins, is not going to be semi-retired after all.