Will add lane to Route 123, improve intersections and drainage. 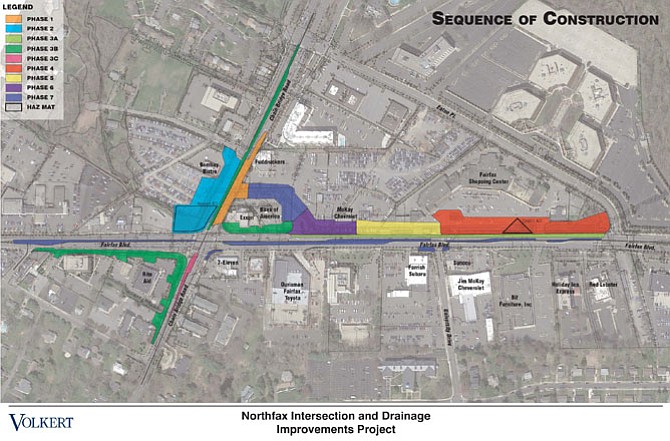 Map of the seven phases of work on the Northfax project and their sequencing. Map Courtesy of Volkert Inc.

After 20 years of planning, analysis and public hearings, the Northfax project is now getting underway in Fairfax. The goal is to increase pedestrian and driver safety and mobility, plus improve drainage, at the intersection of Chain Bridge Road (Route 123) and Fairfax Boulevard (Routes 50/29).

The project will also improve the traffic signals at the Chain Bridge/Fairfax Boulevard intersection, build new sidewalks and fix the problem caused by the existing, inadequate culvert under Route 123. That means construction of a storm-drainage culvert parallel to Fairfax Boulevard from the northwest corner of Routes 123/50 east to Eaton Place to eliminate the flooding along Fairfax Boulevard.

He was speaking last Tuesday, Sept. 13, to the Fairfax City Council, explaining both the scope of the work and the reasons why it’s necessary. And although some City money is involved, he made it clear that “This is a state and federal project, administered by the City.”

In July, the Council awarded the construction contract for Northfax to Branch Highways Inc. Of the four bids the City received, Branch was the lowest and has built several, similar projects.

Then last week, the Council awarded the construction-management contract to Volkert Inc., which is also the construction manager for the ongoing Kamp Washington Intersection Improvements project. Volkert will be responsible for the project’s day-to-day management, alongside City staff.

THE TOTAL COST of the Northfax project is approximately $43.5 million. Some $29 million of that amount is for the construction phase; the remainder is for engineering, right-of-way acquisition and utility relocation. It required right-of-way and/or easements from 23 properties and displaced six businesses.

The City has about $35 million from VDOT and the Northern Virginia Transportation Authority (NVTA) for this project and has committed to funding the $8 million deficit. However, City staff is pursuing outside funding options to help with its share.

Summers said it’s been quite a long journey to bring the Northfax project to fruition. “It took 15 years – between 1998 and 2013 – to get the design approved because of all the utilities – water, gas, sewer – involved, plus right-of-way issues and dealing with VDOT and the FHWA (Federal Highway Administration),” he said. All these things, as well as public hearings, then led to more design changes.

“The whole project, including the bids, receives intense state and federal scrutiny,” said Summers. “Now the utility relocation has all but been completed. And both the City and the construction manager will keep track of the budget.”

He said the turn lanes at the Chain Bridge/Fairfax Boulevard intersection will be lengthened to provide for increased stacking for turning vehicles, plus better sight distance at the turn lanes. Furthermore, said Summers, “There’ll be proper ADA ramps at all four corners and a total rehabilitation of all four [traffic] signals at that intersection.”

The existing, span-wire signals will be replaced with mast-arm signals, and the improved signal phasing and operation should reduce traffic congestion. In addition, new sidewalk will be installed along both Chain Bridge Road and Fairfax Boulevard. Summers said notice to begin construction, with mobilization and demolition, would be issued to Branch Highways on Sept. 19. Lane closures will start in October, with project completion expected in fall 2018.

Just prior to the Council’s unanimous approval of Volkert’s contract, Councilwoman Janice Miller said, “It’s been a long time coming. This is a project that provides a wide variety of benefits to our community.”

The next day, Wednesday, Sept. 14, a public-information meeting was held for area property owners and tenants, plus other interested parties, to discuss the project’s schedule. Volkert Construction Manager Michael Wharton gave an overview of the work to be done and explained the timing of each phase.

“This is your road,” he said, assuring the stakeholders that they’d be kept abreast of the project’s progress and would be inconvenienced as little as possible by the work. “We’ll maintain access to businesses throughout construction, closing only one entrance at a time, so customers can get into your businesses. And we’ll provide advance notice and schedules for temporary entrance closings.”

Wharton also told them to check www.Northfax.com for contractors’ schedules. “There’s a comment page for you on it, and we’ll respond to you,” he said. Volkert will also install identification signs at business entrances.

“We’ll keep the right-of-way and easements along your properties clear,” continued Wharton. “Some Route 50 access points will be closed, but we’ll open others. And we’ll minimize the time an entrance is closed and will do some construction at night to minimize traffic impact.”

THE WORK will be done in seven phases. During the first two phases, from now until September 2017, traffic will be detoured from Route 50 to Eaton Place and Route 123 north while a sixth lane is added to northbound Route 123. The box culvert will be built across Chain Bridge Road, and water and sewer pipes will be installed. And traffic-signal construction will begin at Orchard Place, the Chain Bridge Road intersection, University Drive and Eaton Place.

Phase three, from June-November 2017, will include median construction on Chain Bridge Road. Phase four work, from September 2017-April 2018, involves removing the detour for Route 123 north and building the box culvert along Fairfax Boulevard.

School Board member Bob Reinsel asked if there’d be coordination with the school buses, and Summers said City Transportation Director Wendy Block Sanford has been “working closely with the schools on that issue.” Similarly, Cobbdale Civic Assn. President Ray Girouard said his community is “concerned about cut-through traffic because of this project, and we’re currently coordinating with the City to do some traffic calming.”