More than 500 compete in area event. 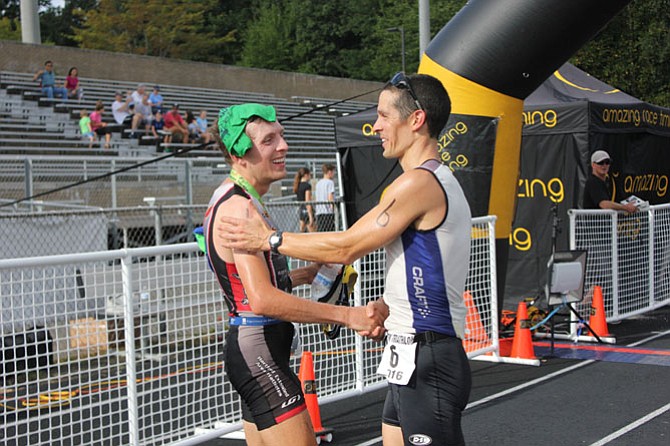 “I knew he was trouble when I saw him at the turn-around. Make sure to point out he was the one who got me,” Jake Gramlich, Vienna, congratulates rival Tom McWalters, Manassas Park. Photo by Joan O'Bryan/The Connection

During the preceding week, Kelly Edwards of Waterford, Va., had been experiencing a strange feeling: butterflies in her stomach, but not the usual kind. They were “happy butterflies.”

Her daughters Hannah and Emma had the diagnosis. It was “nervouscited,” according to Hannah, a condition of being nervous and excited at the same time. Edwards had been training three times a week, including family swims, to prepare for her first time participating in the Reston triathlon and had developed, as her daughters were well aware, a rather severe case.

The reason for the nerves, aside from the usual pre-race jitters, was that this was her first time participating in an Olympic distance triathlon. She joined a swell of 554 athletes as they gathered bright and early for the 7 a.m. Lake Audubon kick-off. The course consisted of a 1,500 meter swim, 40 kilometer bike-ride, and a 10 kilometer run, all through hilly Reston.

It was ideal triathlon weather, partly sunny with cool breeze, but turnout was lower this year than it had been in the past. Bunny Bonnes, Race Director, blames the smaller crowd on the saturation of races in the area. Occurring simultaneously was Nation’s Triathlon in downtown Washington, D.C.

Unfortunately for patrons of Nation’s, Bonnes reported, the swim-portion was cancelled due to pollution in the Potomac River. Panicked triathletes eagerly sought alternatives and Bonnes bore the brunt of the onslaught. “I got calls on Friday, you wouldn’t believe [how many], saying ‘I can’t do the swim! Can I get in your race?’” But at that point, preparations had all been finished. “We couldn’t possibly accommodate them. Join us next year. We have a beautiful lake which doesn’t get polluted!”

STANDING AT THE EDGE of the very clean lake, cheering on competitors, was Norm Happ, the founder and original Race Director of the Reston Triathlon and long-time Reston resident. He began agitating for a local triathlon in 1983, holding organizational meetings with wife Barbara in their living room. The inaugural event launched in 1984, and since then it’s been a Reston tradition.

For thirty-three years, there has been a devoted coterie of comrades who attend without fail. Happ is especially proud of friends Neil Medoff, 73, and Rick Uhrig, 61, who have competed in every single race since the triathlon’s inception. Bonnes herself falls into the die-hard devotee category, having volunteered in the very first race as Food Captain and steadily worked her way up the volunteer chain of command.

For some Reston residents, the tradition is maintained in the family. Pat Conrad attended the first race in order to cheer on his father, Tom. In honor of its new birth, he performed a peculiar baptism. Instead of ducking his head in water, then fourteen-year-old Conrad accidentally ducked his head in front of a biking racer: “I was unconscious for a half hour.”

The knock to the head didn’t dissuade him from entering the race. In fact, he says, “maybe it motivated me.” The next year, 1985, fifteen-year-old Conrad attended the race as a competitor in his own right. (The race is limited to competitors aged 15 and older.) The family rivalry surely had some motivating effect as well. “[I’m] the youngest of four Conrads to do it. My brother, my sister, and my Dad. I’m the only one this year, representing the Conrads.” He’s currently a resident of Colorado, but the pull is strong: “I travel back every year.”

The Earley family also commented on the Reston triathlon tradition. Stephen Earley participated for the first time with father Pete Earley in 1991. He was fifteen; his father was forty. As he wrote in a Facebook post, “I realized that this year would be the 25th anniversary of my first triathlon, and that this year I would be the same age as my dad was when we first raced together in 1991… It was a quite nostalgic experience - as I rode across the same streets I remember growing up, including the bike course that I used to ride when I would go visit my grandmother's house.” Earley reminisced during the race, remembering and honoring family members and especially his college roommate who had passed away that day fifteen years ago, when the twin towers in NYC were attacked. Proud father Pete acknowledged that Stephen even beat his time, though “only by a few minutes.”

While tradition plays an important role in the Reston community, this year’s race was dominated by the first-timers. Jimmy Sosinski, 34, of Haymarket, won the men’s race overall with a time of 2:08:04 (2 hours, 8 minutes, and 4 seconds). He says he’s run somewhere in the ballpark of forty triathlons in the past six years and this was a training race. He had a good race, but said “the run course was tough because it had rolling hills, the bike [course] had rolling hills, so it was tougher than I expected but you know, I got the win.” Sosinksi participated in the triathlon as a training event on his road to achieve a Kona Iron Man qualification time, which would enable him to compete in Hawaii. 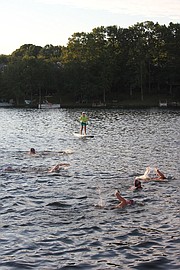 The Reston Triathlon begins with a 1,500 meter swim at 7 a.m. at Lake Audubon.

ON THE WOMEN’S SIDE, another first-time attendee, Claire Wolff, 17, of McLean, won with a time of 2:25:28. She currently attends McLean High School where she is a competitive swimmer. “I’ve been doing it for thirteen years, so it’s just always been something that’s consistent. I like the water.” She began adding biking and running to her workout routine when she heard that triathlons were on deck to become an NCAA sport. She joined the local triathlon team, Machine M3, where she participated in a few sprint triathlons. At the end of the race she said she felt, “a little bit in pain, but overall pretty good!”

Most of the athletes are adults, but high school students made a healthy showing. Jonathan Hurley, 17, an Alexandria resident attending Gonzaga High School, won his age group (15-19). It was also his first Olympic-length triathlon. He loves the triple threat of triathlons: “you have to be good at all three of them. I’ve always loved endurance sports, so it just kind of comes natural to me.” He was supported by friends Liz Kern, 17, and Jena Elshami, 16, who rewarded his hard effort with a “Love You, Grandpa!” balloon. It’s nice to get support at that ripe old age.

The athletes may get all the glory, but it would be remiss to ignore the contributions of their supporters. Family and friends woke as early as 4:30 am to get their athlete on the road. Waking up is the least of their worries, it turns out, as it takes some effort to be an effective spectator.

Wali Raffiqi and Charlie Gloeckner stood together in support of two Kirstens, pronounced differently in case you were confused: Kirsten Evans and Kirsten Gloeckner. Raffiqi was grateful for the advice from an expert spectator. He had already experienced his share of viewing woes. “I had my phone ready… but when it was time for my girlfriend, I had my phone up and literally looked away for three seconds and I looked over and she was walking up the ramp!” He blamed his camera troubles on the difficulty spectators can have distinguishing one swim-capped head from the hundreds of others.

Thankfully, the nature of the event provides second chances, and Raffiqi was making sure that he wouldn’t miss filming Evans on the bike. Gloeckner pointed out that once again, the odds were against him. Evans had a black helmet and black tank-top on, not likely to stand out in the crowd. According to Gloeckner, an expert spectator will make sure to remember their athlete’s outfit colors and, if possible, note their unique swimming, biking, or running characteristics. Knowing your athlete’s gait can help a great deal. Ideally, you should convince them to perform “peacock style.” A bright color will always stand out: “When she [Kirsten Gloeckner] does a full Iron Man, she’ll try to get a blaze orange running top so it’s easy to spot her.”

Finally, Gloeckner recommends that the fans make their own strategic fashion choices. “At big races, like Iron Man, you’ll see whole families dressed in the same color, that way the racers can see the clan.” The Giaccio family, from Chantilly, evidently took this sentiment to heart, with all eight members showing up in sky blue t-shirts with the words “Giaccio fan” written across the front. They’ve had the shirts for many years now, using them for all events from soccer games to Brad Giacco’s seventh Reston triathlon. They also brought cowbells, a must have for any dedicated triathlon booster.

Last but not least, the race itself wouldn’t be possible without a host of staff and volunteers. There were thirty police officers en-route, ensuring participant safety. Pfc Gary Moore arrived from the Mason district at 6 a.m. to get his race assignment. He says that overall it’s an enjoyable experience because it’s easy police work.

The police were assisted by numerous volunteers in red shirts. Russ Van der Veer and son Chris participated as members of their boy scout troop, ensuring that cars and pedestrians stayed well out of the way of the speeding bicyclists. David Bobzien, another die-hard loyalist, began volunteering in 1986, after racing for two years. He was a Reston Runners founder who for many years ran the finish line for runners. After they professionalized that position, he joined the finish line volunteer team at the triathlon. He keeps coming back year after year because he loves the “sense of really helping people in need, that is very spent athletes who put a lot into the training and the race itself, and it just feels really good being at the finish line to be able to help them out.”

A LIVE BAND also accompanied the competitors as they finished the race, playing them to the finish line at the South Lakes High School track. The members of South Bay were also first-time participants and they were excited to participate in the community activity. The name comes from South Bay lane, only a hop, skip, and a jump away from the course, where the members have been practicing for about seven years.

The music only got the party started. After finishing, racers were given a medal and plenty of water, and hustled past the fans on their way to well-earned refreshments. Pizza and bagels provided the necessary carbohydrates for a post race refuel.

Participants went home sweaty and happy. As for Kelly Edwards, the “nervouscited” didn’t inhibit her race performance. She finished strong and was happily reunited with family in the stands. Of course, her daughters never had any doubt. They had provided her pre-race with healthy dose of the necessary prescription: “hugs.”