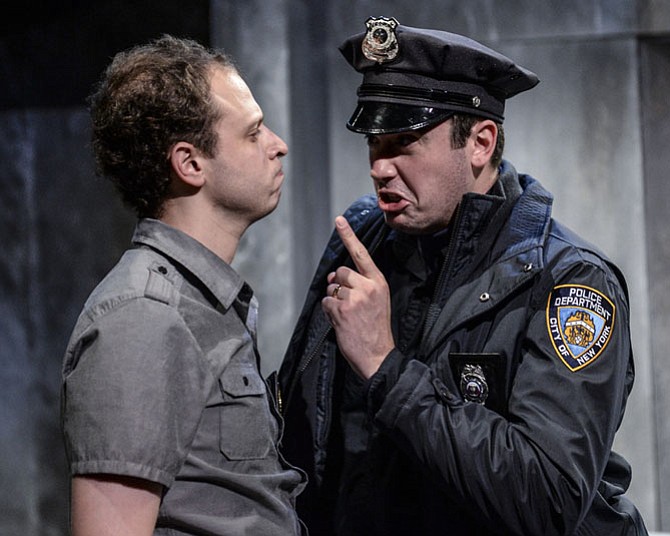 From left -- Aaron Bliden and Matthew Sparacino in "Lobby Hero" at 1st Stage.. Photo by Teresa Castracane/Courtesy of 1st Stage

From left -- Justin Weaks and Aaron Bliden in "Lobby Hero" at 1st Stage.

Convincing performances including a torrent of words award audiences with a shifting tale of humor, subtlety and rough edges in 1st Stage’s top-notch take on “Lobby Hero,” a rarely performed play by Kenneth Lonergan. It is a complicated, brash world that Longeran created; a world of people living on quicksand, where false moves are easy to make, especially when not well thought through.

With Alex Levy’s empathetic direction, a cast of four ignite the stage with lives under stress. “Lobby Hero” explores race, gender, status, justice and heavy, but very real-life ethical issues. It is no TV cop procedural with things wrapped up tightly with a bow at the end. In “Lobby Hero” life is far from safe; there is little shelter from the storms that form over each of the characters as they find ways to cut corners to survive.

The audience meets up with a bored, lonely young man who takes a job as a security guard. He has little choice because of his previous mistakes. In this role Aaron Bliden gives a most convincing performance. He is full of nervous energy and idle chatter, with a comic wit as a survival tool, and a sense of decency that gets well-tested. His performance is key to the show’s success.

Surrounding Bliden is a “by-the-book” supervisor, man who at first seems coolly in control. The fine performance by Justin Weaks depicting a supervisor caught between his values and family loyalty. There is also a more than overbearing, cock-sure of himself cop, Matthew Sparacino, in a bravura performance full of bold gestures and self-assurance. His rookie female partner Laura Artesi, convincing as a shy woman trying to find her way in a man’s world.

The show takes place in the lobby of a contemporary NY City apartment with the set design by Kathryn Kawecki. The set has a sense of massiveness and solidness. Neil McFadden’s sound design is a beauty, especially during scene changes with its nervous, jazzy percussive music adding to the sense of insecurity of the characters. Kudos go also to Jane Margulies Kalbfeld for her work as New York City dialect consultant and Mary Keegan for her lighting design.

In “Lobby Hero” conflicts and arguments churn; sounding all too real. This successful production about tough ethical issues leaves an audience a great deal to chew on even after the show concludes.