When completed, the Lewinsville Center Campus will include 82 affordable independent living residences. 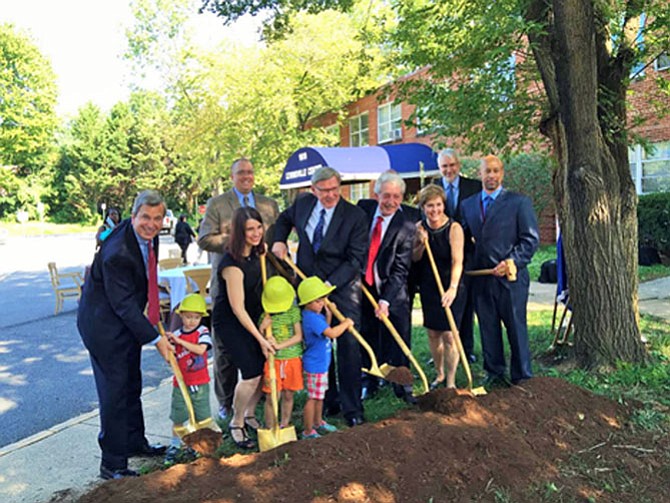 The groundbreaking for the Lewinsville Community Campus was held on Sept. 8 in McLean. Photo Contributed

The 8.66 acre site of the Lewinsville Senior Center Campus at one time housed an elementary school, originally constructed in 1961. In 1994, the County approved a Special Exception Permit that permitted a 22-bed independent living facility, a senior center providing activities for up to 50 adults, an adult day care center for up to 40 adults, child care for up to 210 children, and an athletic area with a rectangular field and a diamond.

On March 3, 2015, the Board of Supervisors unanimously approved the Special Exception application for the new facility. When completed, the Lewinsville Center Campus will include 82 independent living residences, all of which will be provided as affordable units. Seventy-three of the units will be available to people 62 years and older whose income is at 50 percent of the Area Median Income (AMI). The remaining nine units will be affordable at 30 percent AMI. The Senior Center will be expanded so that it will be able to increase the number of participants served from 50 to 80. The Adult Day Center will be expanded so that its capacity will double from 40 to 80 participants. The two child day care centers will continue to serve 210 children but in larger space. The youth playing field will be increased to a regulation size Under -13 field.

Wesley-Hamel Lewinsville LLC, the developer of the residential facility, has engaged in robust public outreach to users of the facility, adjacent neighbors and homeowner associations, and the McLean Citizens Association. Throughout this process, there were several well-attended public meetings in addition to individual meetings with neighbors and homeowner associations. Most recently, a “Pardon Our Dust” community meeting was held on June 23, 2016 to provide updates on the project.

As the project advanced, concerns were raised about stormwater management, traffic, and parking. To alleviate these concerns, the plans include stormwater management features that will reduce the current site’s outflow into Saucy Branch Creek by 54 percent and an additional left-hand turn lane into the facility from Great Falls Street and planned restriction of left-hand turns out of the facility at one of its entrances. The developer is also providing more parking spaces than required by zoning regulations.

“There is a tremendous need in our County for housing for the elderly, particularly those who live on low incomes. This is a project that will help fill that need and that has taken community input into account at every stage of the process. The expanded space for the Senior Center and the Adult and the Child Day Care Centers is wonderful. This is an awesome public-private project,” said Supervisor Foust.

The residents of the 22 existing units have been relocated to other County facilities, and those who wish to move back to the facility following completion will be given first priority. The Adult Day Center has been moved to 7700 Leesburg Pike, Falls Church; and the Senior Center is now housed temporarily at the Lewinsville Retirement Residence, located at 1515 Great Falls Street. The two child day care centers will be moved to learning cottages on the athletic field late this year or early in 2017. The residential building is expected to be completed in spring 2018; the public buildings are expected to be completed by fall 2018.