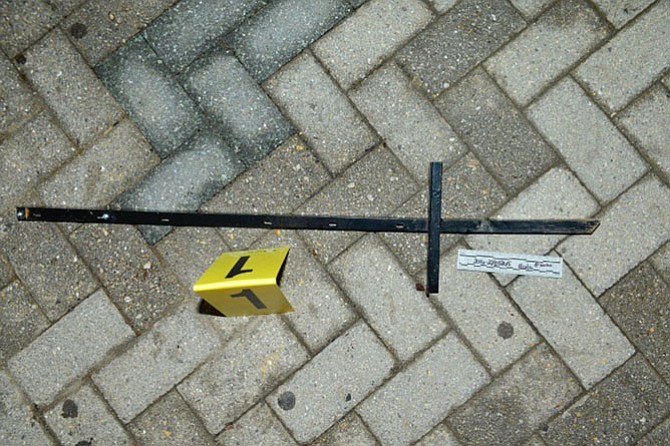 Police later released a photo of the apparent weapon, which turned out to be a metal signpost with a sharp end used for driving into the ground. Photo courtesy of Fairfax County Police

“The Fairfax County Sheriff’s Office continues to cooperate with the Fairfax County Police Department’s investigation of the Aug. 15 deputy-involved shooting on the Inova Fairfax Medical Campus. The deceased has been identified as 29-year-old Jovany Martinez of no fixed address. The deputy involved, MDS Patrick McPartlin, is an 18-year veteran of the Sheriff’s Office assigned to the Confinement Division. He remains on administrative leave. Detectives from the police department’s Major Crimes Division continue their investigation and ask that anyone with information regarding this case, contact the Major Crimes Division at 703-246-7800.

Jovany Martinez is the 29-year-old Hispanic man who died after being shot by a Fairfax County Sheriff’s deputy Monday night Aug. 15 outside Inova Fairfax Hospital.

Fairfax County Police are conducting a criminal investigation of the shooting, while the Sheriff’s office is working their own administrative investigation to see if the deputy followed policies and procedures.

Police released Martinez’ name, along with additional information about events leading up to and including the shooting, on Aug. 19. They said he had no fixed address, but detectives were able to locate and notify his next of kin, as is their policy before releasing names of the deceased.

Martinez first came into contact with police earlier that day on Aug. 15, police said, approaching a uniformed police officer in a marked police cruiser parked in front of a gas station in the 7100 block of Little River Turnpike in Annandale.

He started a conversation with the officer, who eventually suspected Martinez suffering a medical emergency from either the extreme heat, a mental health issue or perhaps a combination of the two.

THE OFFICER called Fairfax County Fire & Rescue and a team of medics responded to the location. They assessed Martinez, police said, around 2 p.m. and decided he should go to Inova Fairfax Hospital to be further evaluated.

The officer also went to the hospital; once medical staff gave Martinez a mental health evaluation, they would be available if necessary to escort him to the Merrifield Crisis Response Center.

Medical staff told the officer Martinez was not in mental distress, so the transport investigation was concluded around 4 p.m.

Later that evening, police said, Martinez was discharged and escorted to the bus stop by hospital security.

It was shortly after that when security received reports of a man at the bus stop threatening people with what appeared to be a weapon. It was Martinez.

Police and the Sheriff’s office have said Martinez attacked a security guard with pointed metal sign post when they responded to the scene. The guards called for backup, which brought a Sheriff’s deputy to the scene as well as Fairfax County Police officers.

Despite the deputy, who Sheriff Stacey Kincaid said was Crisis Intervention Team trained to better engage with people with mental illness, attempting to de-escalate the situation, Martinez ran at the deputy and swung the post in an attempt to strike, police said.

While the deputy “tactically retreated,” they commanded Martinez to stop what he was doing. When he didn’t respond to repeated attempts, the deputy shot him several times.

MARTINEZ was taken to the emergency room at Inova for his wounds. He died early the following Tuesday morning.

Police Chief Edwin Roessler and Kincaid said in a press conference later that day it isn’t known whether there was a language barrier between Martinez and the guards or the deputy.

Tracy Connell, a spokesperson for Inova Fairfax Hospital, would not elaborate on Martinez’ condition, saying via email HIPAA laws prevent them from disclosing any patient medical history, diagnosis, care or treatment.

When asked why Martinez was escorted to the bus stop by hospital security guards after his discharge, Connell responded: “An escort can be provided to a patient for a variety of reasons. Inova continues to cooperate with the Fairfax County Police Department as they conduct a full investigation of the incident.”

While Fairfax County Police have touted their use of “less lethal” force in recent incidents — employing bean bag guns to bring down a suspect rather than a firearm — FCPD spokesperson Don Gotthardt said the deputy that shot Martinez was not carrying a bean bag gun or a taser.

Spokesperson for the Sheriff’s Office 1st Lt. Maegan Timothy said tasers and bean bag guns are not mandatory for deputies to carry.

Outside the jail, deputies may carry tasers and bean bag guns, Timothy said, if they’ve gone through the training.

Both the criminal and administrative investigations of Martinez’s death are ongoing.