Text prepared by Board of Supervisors and FCPS board chairs. 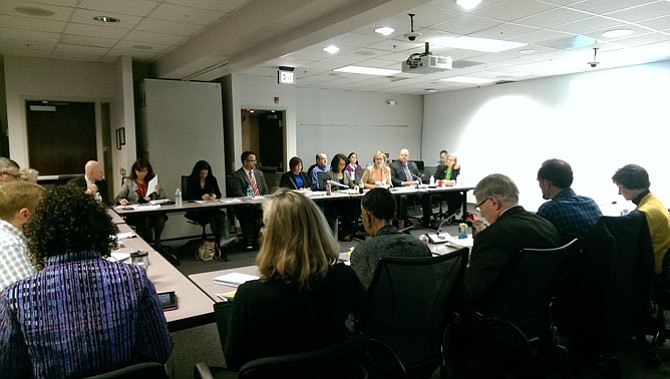 FCPS Superintendent Karen Garza (rear, right) laid out FY2018 required expenditure assumptions totaling over $58 million. Enrollment growth, retirement rate increases and health insurance rate increases were among those costs Garza said “are going to fluctuate but we have no choice but to pay.” Photo by Tim Peterson.

“The meals tax is intended to diversify county revenue and to supplement and not supplant support for school and county services.

The meals tax would create a new revenue source, paid by diners in Fairfax County who are county residents, tourists, and workers who live in neighboring jurisdictions.

The School Board has committed that its share, estimated to be almost $70 million in new funding, will be used primarily to address teachers' salaries, which have lagged behind neighboring communities.

Almost $30 million would be available to address general county services or capital improvements such as in public safety, mental health services, libraries, and parks, as well as providing for property tax relief.

Note: the meals tax, if approved, would not be levied in the Town of Clifton, or in the Towns of Herndon and Vienna, where a meals tax has already been implemented.”

There continues to be division, at least among several members of the Fairfax County Board of Supervisors and School Board, on whether voters should approve a referendum allowing the government to levy up to a four percent additional tax on prepared foods and beverages at restaurants, as well as ready-to-eat foods from grocery and convenience stores.

Fairfax County claims the tax would raise an estimated $100 million in a year, of which 70 percent would be directed to FCPS and their effort to make teachers’ salaries more competitive with the market and surrounding school districts. The other 30 would go to other county services such as public safety, mental health, libraries and parks.

FCPS Superintendent Karen Garza laid out FY2018 required expenditure assumptions totalling over $58 million. Enrollment growth, retirement rate increases and health insurance rate increases were among those costs Garza said “are going to fluctuate but we have no choice but to pay.”

THE TOTAL nearly matches up with the standard three percent increase in transfer from the Board of Supervisors. That would leave out projected compensation needs including a planned step increase in teachers’ salaries -- a $44 million change alone from FY 2017 -- and teacher scale implementation -- a $44.3 million increase.

Supervisor John Cook (R-Braddock) thanked Garza for “the cleanest fall presentation” he’s seen in his time on the board. “This tells us what we need to know,” he said. “If the meals tax passes, you get it, if it doesn’t, you don’t.”

There was confusion initially over whether the statement would be issued on behalf of both boards and therefore reflect their collective views. It was pointed out neither board had voted on the statement’s content.

Springfield District school board representative Elizabeth Schultz said in no uncertain terms she wouldn’t vote for releasing the statement. She said she was critical of the statement omitting text to help voters understand the “magnitude of the impact” the tax would have, especially on low income families.

Supervisor Pat Herrity (R-Springfield) spoke to some criticism the BOS has received over previous public mailings on the meals tax coming across as intended to influence voters to vote in favor of it.

“It depends on whether you think you have a spending problem or a revenue problem,” Herrity said. “This is PR.”

Chairman Sharon Bulova explained the statement was developed by both chairs to be used to explain how funds from the meals tax would be used.

Budget committee chair Supervisor Jeff McKay (D-Lee) asked if any supervisor or school board member thought anything in the statement wasn’t factual.

Sully District school board representative Tom Wilson called the move for a meals tax “premature,” and that the Supervisors don’t have good information on the implications of the meals tax, if passed, on restaurants, families and other businesses.

“I don’t think it will have a negative impact on restaurants and staff,” responded Supervisor John Foust (D-Dranesville). “The opposition, they haven’t stepped forward,” with proof the meals tax will be the blow they say it will.

“Instead of being more jobs- and economic growth-oriented, we’re going to make it more difficult to live in Fairfax County.

To Herrity, Schultz and others, Supervisor Dan Storck (D-Mount Vernon) said his response is, “Show me where we’re spending $100 million wrong. I hear bits and pieces, but they’re small pieces. The issue is we’re talking about a much larger challenge.”

Storck said he’s supportive of finding other ways to fund education and reduce the burden on real estate property tax, but that the Virginia General Assembly limits the County’s options by withholding income tax and constraining other taxing power.

“I lament, I’m frustrated because state legislature needs to give local communities the trust they say they have in us,” Storck said, “to make the kind of local decisions frankly democracy was founded on. Give us those choices, those opportunities. I think that the referendum is a way to do that. We have to at least make an effort to see it through.”

MORE INFORMATION on the 2016 Meals Tax Referendum is available here, including the text of the ballot question in both English and Spanish.