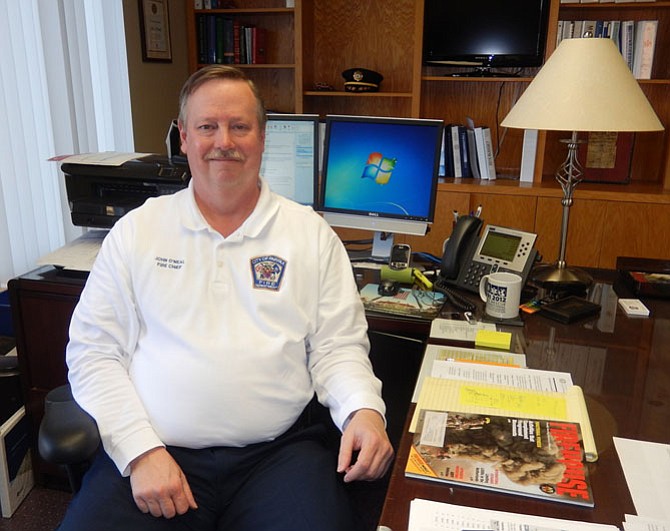 With nearly three decades of experience, John O’Neal became chief of the City of Fairfax Fire Department in January. But he wanted to be a firefighter ever since he was a boy, growing up in Portsmouth, Virginia.

“I started hanging around neighborhood fire stations at age 11,” he said. “The guys treated me well and I had an admiration for them and for the job. It was about helping people, and I don’t think you can have a better job than knowing you can go to work every day and help someone.”

O’Neal started volunteering in Suffolk when he was 16 and became an EMT (emergency medical technician) then, too. In his last year of high school, he started working part-time for a private ambulance company in Portsmouth as an EMT, expanding to full-time for one year after graduating.

At age 19, he was hired by the Chesapeake Fire Department as a career firefighter. He then returned to Portsmouth at age 21 and served with its fire department from 1986-2001, progressing through the ranks to lieutenant, captain and battalion chief.

“I loved it,” said O’Neal. “Portsmouth had a lot of active, fire-and-rescue calls. And along the way, I picked up my paramedic license and worked part-time as a paramedic for Portsmouth’s contracted EMS system. I was at Children’s Hospital in Norfolk as an EMS [emergency medical services] neonatal, pediatric paramedic for 18 years.”

He also spent four years as a flight paramedic for Norfolk General Hospital, doing both hospital jobs while being a full-time firefighter and going to college. He earned an associate’s degree in Fire Science in 1988 from Tidewater Community College. In 1996, O’Neal obtained a bachelor’s degree in Fire Administration from the University of Maryland University College. And in 2001, he received a master’s in Public Administration from Troy State University’s Norfolk campus.

“As a paramedic, I was making a difference, saving lives and helping people who were suffering,” said O’Neal. “Being a firefighter and a paramedic is a very rewarding career, being able to positively impact people’s lives.”

Working in the neonatal, pediatric field, he learned advanced skills to care for children, plus other advanced procedures that most street paramedics never use. “I love children, so I wanted to learn more about caring for kids in an emergency setting,” he said. “It can be a sad job, too, because you see the best and worst in humanity. But making a difference is why we’re here and why we come back every day.”

It was a busy, active department and was where O’Neal first got exposure to the Commission on Fire Accreditation International – the national accrediting agency for the U.S., Canada and Department of Defense fire services. “The fire chief wanted that department to gain accreditation, so I moved that project forward and we achieved it,” he said.

He then became involved with that agency as a peer assessor and peer team leader; and now, he’s an agency mentor. In that position, he’s traveled across the U.S. evaluating fire departments according to Commission standards.

After four years in Jacksonville, O’Neal became chief of Manassas Park’s fire department in 2005. It aids Prince William County and the City of Manassas and is part of the Northern Virginia Emergency Response System.

“It was a good experience,” he said. “I moved that department from being reactive to pro-active, following industry best practices. I enjoyed the job’s challenges; I like being engaged, busy and productive. And being fire chief, you get pulled in many, different directions, so I was never bored.”

But by 2011, O’Neal was ready for fresh, new challenges and a larger department. He was offered the fire chief’s job in Addison, Texas, in Dallas County, and it proved a good match.

“Addison had many, mid- to high-rise buildings, 22 hotels and 200 bars and restaurants in four-and-a-half square miles,” he said. “And with a daytime population of 100,000, it was an active city with many calls.” In 2013, thanks to O’Neal’s efforts, his fire department became just the fifth in Texas to earn international accreditation.

But with elderly parents in Virginia’s Tidewater area and a daughter in Manassas, O’Neal wanted to live closer to his family. So in January, he returned to the Commonwealth and, on Jan. 25, started his new job as Fairfax City’s fire chief. Former Fire Chief Dave Rohr retired last August, leaving the position vacant.

“The City of Fairfax has always had an excellent reputation, so I applied,” said O’Neal. “I interviewed with City Manager Bob Sisson and a panel and was chosen in December. I feel blessed; I’m honored to have been selected. It’s a great community and I’m happy to be part of it.”

“The decision was difficult, given the high caliber of finalists,” said Sisson. “However, John [has] an excellent combination of hands-on and management experience.”

ON THE JOB four months now, O’Neal said, “I’m impressed with the quality of our personnel and the level of service we provide to the community. We have about 80 staff members, including 60 firefighters on the street – the majority cross-trained as paramedics.” He said people have been friendly and welcoming to him, and both he and the firefighters were eager to learn each other’s personality, vision and goals.

“Our staff’s professional development is very high,” said O’Neal. “I’m a strong believer in safety for our firefighters and training for our staff to be prepared for all emergencies. And I’d like to reduce the City’s Insurance Services Office [ISO] fire-protection rating. The ISO evaluates a city’s dispatch center, water supply and fire department.”

It examines the fire department’s training program, amount of equipment and distances emergency vehicles travel to answer calls. It also looks at the type and size of buildings the department protects in the community and evaluates its ability to do so.”

“On a 1-10 scale, with 1 the best and 10 the worst, the City has an ISO rating of 3, and I’d like to improve it to 1,” said O’Neal. “We can do this via training recommendations, having the proper apparatus and demonstrating compliance with ISO standards through administrative record-keeping and equipment and apparatus tests. So we need to improve our administrative policies and practices.”

He also wants to work toward the department receiving international accreditation. “It’s geared toward continuous quality improvement in our level of service and compliance to national, best-practices and standards,” he explained. “I believe it’s achievable – and I’d love Fairfax City to be the first fire department in Northern Virginia to accomplish this.”

But besides that, said O’Neal, “I want to make sure our staff is well-trained, safe and has the equipment necessary to do the job. There’s satisfaction in providing a high level of service and safety to the citizens. I’m happy to be here and I’m looking forward to serving the community.”