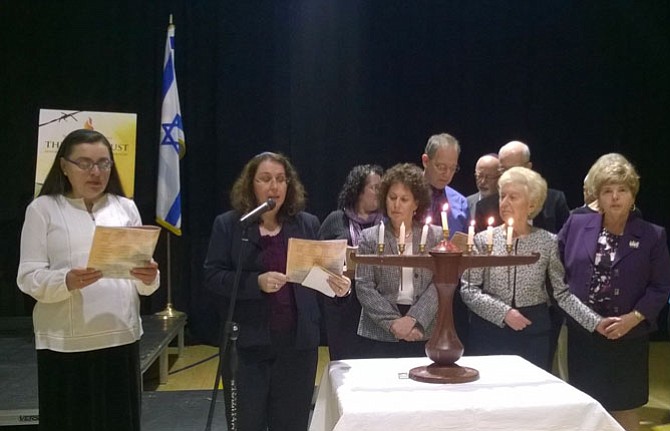 Participants of the Yom Ha’Shoah service May 1 in the Jewish Community Center gymnasium prepare to light the fifth candle on the menorah for the children of Holocaust survivors and pledge to commemorate, educate and forever remember the ways their parents suffered. Front, from left to right: Virginia Community Choir singer Judith Fogel, Rabbi Michelle “Mina” Goldsmith from Herndon synagogue Congregation Beth Emeth, Lesley Weiss – who lit the candle for her mother and Holocaust survivor Irene Weiss -- and Myra Brown Gondos.

“Diaspora,” a mixed media assemblage by artist Lynn Goldstein bears photographs of her family who had the courage to leave their home to escape the Holocaust and hope for a better future in the United States. It is part of an art exhibit called “After the Holocaust” on display through May 19 in the Jewish Community Center of Northern Virginia at 8900 Little River Turnpike in Fairfax. Call 703-323-0880 or visit www.jccnv.org. 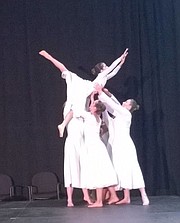 Six ensemble dancers who represent the future free a solo dancer from the past and lift her in a final salute so they can let go of the burden of the Holocaust and seek peaceful lives for next generations. The piece was choreographed by Rebecca Weiss for a Holocaust Remembrance program May 1 in Fairfax at the Jewish Community Center of Northern Virginia under JCC dance director Barri DeFrancisci. Both performed to the song “Streets” by Olafur Arnalds with younger dancers Felicity Fei, Faith Hammerdinger, Tayler Hutson, Alexandra Neacsu and Mia Rivelis. 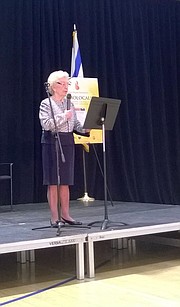 Fairfax County resident Irene Weiss, 85, tells an audience about her experience as a 13-year-old teenager at the Auschwitz-Birkenau concentration and extermination camp in Poland, where most of her family was murdered and she toiled daily in forced labor for more than a year with her older sister, Serena. Her eyewitness account received a standing ovation Sunday at a Holocaust Remembrance seminar called “Seeking Justice: 70 Years After Nuremberg.”

From left: Springfield residents Irene Rehbock, 89, Lore Schneider, 91, and Anne Herrmann, 94, prepare to leave the Yom Ha’Shoah service Sunday night at the JCC in Fairfax. Rehbock was scuttled out of Germany in 1938 aboard the Kindertransport, an organized rescue of nearly 10,000 Jewish children sent from Europe to England in the months leading up to the outbreak of World War II. Schneider’s father was a lawyer and judge for the Nuremburg trials. “We got out of Germany before the war broke out,” she said. Herrmann was born in Nuremburg in 1929 and escaped Germany aboard the kinder train. Her family, however, did not survive the Holocaust.

More than 400 people remembered victims and survivors of the Holocaust on Sunday at an interfaith service in Fairfax at the Jewish Community Center of Northern Virginia.

This year’s observance shed light on the first war tribunal that tried Nazi leaders for crimes committed during World War II — including the murder of millions of Jews — in an international court known as the Nuremberg trials.

The May 1 program offered free activities for all generations — including an art exhibit, teen dialogues, intergenerational discussions with Holocaust survivors, readings, music, dance and a solemn candle lighting ceremony with pledges of remembrance.

Black, who earned his doctorate in European history from Columbia University, noted Nuremberg was the first “internationally genuine tribunal” that indicted 24 defendants, convicted 19 “and handed down 12 death sentences.”

THE FIRST OF A SERIES OF TRIALS held within a 12-month span opened Nov. 19, 1945 in the Palace of Justice in Nuremberg, Germany. Black said 12 trials indicted 177 Nazi leaders and convicted 17.

According to the Sunday service bulletin read aloud by various participants, “It was here that the façade of laws the Nazis used to indict the Jews was created and it would be here that Nazi criminals would face justice.”

Black explained Nuremberg “set an imperfect precedent for a system of international criminal law and agreed upon definitions of certain crimes.”

Unfortunately, interest in the war trials waned on both sides of the Iron Curtain, he said, as the Cold War gained momentum.

Lawyers and judges failed to get justice for all victims — including targeted groups that did not receive as much attention as the Jews, Russian prisoners of war, Polish civilians and others throughout Europe:

About 7 million Soviet civilians were lined up then shot execution-style into mass graves.

An entire population of nearly 26,000 Roma was killed in Croatia.

Same gender sex was illegal in Germany before and after the Nazi occupation. Gays and lesbians continued to suffer persecution.

The United Nations General Assembly pays its respects to Holocaust victims and survivors with an International Day of Commemoration every Jan. 27 — which marks the day in 1945 when Russian troops freed slaves in Poland from the Nazi concentration and extermination camp at Auschwitz-Birkenau.

Fairfax County resident Irene Weiss, 85, remembers that cold, winter day when she and her sister, Serena, were part of a legion of prisoners led by Schutzstaffel guards on a death march through the forest from Auschwitz to another concentration camp in an unsuccessful attempt to evade the Red Army.

Last summer, Weiss went to Germany and testified against former SS guard Oskar Gröning at a trial for his role as bookkeeper at Auschwitz.

Although Gröning is an elderly man of 94 years and didn’t kill people with his own two hands at the concentration camp, he was a participant and charged in 2014 by German prosecutors as an accessory the murder of 300,000 people.

Gröning describes himself as a “small cog in the gears” of the extermination machine, Weiss states. “He makes no connection between himself and the process of killing.”

Germany has no capital punishment, Weiss says, and Gröning was found guilty then sentenced to just 4 years in prison for participating in genocide.

She believes he will die waiting for an appeal in what may be one of the last trials for Nazi war criminals.

This week’s Holocaust tributes coincide with the annual “Yom Ha’Shoah” — the Hebrew term for days of remembrance for catastrophe — which has occurred each April or May according to the Jewish calendar’s 27th day of Nisan. The tradition started in 1953, when then-Israeli leaders signed Holocaust Remembrance Day into law. Yom Ha’Shoah occurs between the anniversaries of the Warsaw Ghetto uprising on April 19, 1943 and Israeli Independence Day.

This year’s Holocaust Remembrance Day occurs between sunset Wednesday, May 4 and Thursday, May 5, beginning with the lighting of a “yahrzeit” — or soul — candle in collective memory of the Nazi genocide of 6 million Jews during World War II.

OBSERVANCE PROGRAMS are held all week across the country and the U.S. Capitol. At the Holocaust Museum, more than 5 million names of known Jews who died are read aloud all week.

Another custom is to offer a “tzedakah” — or charitable gift — to honor the memories of deceased loved ones. A donation to the Jewish Social Service Agency can help save lives and provide basic needs for more than 400 aging Washington-area residents who are Holocaust survivors — many of whom exist below the federal poverty level. Learn more about this nonprofit organization at www.jssa.org/survivorsprogram.

“After the Holocaust,” is an art exhibit with works of art created for this year’s event on display through May 19 in the JCC at 8900 Little River Turnpike. Call 703-323-0880 or visit online at www.jccnv.org.

Next year’s Holocaust Remembrance Day is April 23 and will observe displaced persons and their struggles to find a home.

Linick says she designs each year’s service to touch the hearts and minds of everyone in the community so people of all backgrounds can connect with the program.

She says one of the reasons the Holocaust occurred was because so many Europeans were bystanders and said nothing. The annual dedication teaches us danger lurks everywhere and we need to become “upstanders” who stop injustice.