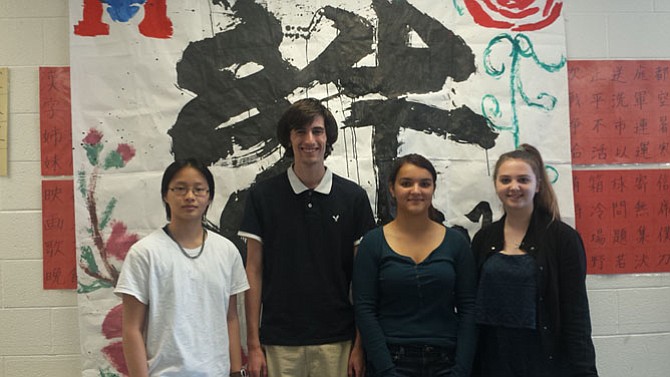 From left -- Ngan Bui, Jay Bruce, Nicolette LaPalme and Koryn Freeman are a few of the students that represented Hayfield Secondary at this year’s National Japan Bowl, held on April 14-15 at the National 4-H Youth Conference Center in Chevy Chase, Md. Photo by Marissa Beale/The Connection

This year’s National Japan Bowl brought language students from around the country together to compete and test their knowledge of Japan.

More than 200 students from 76 teams around the country were part of the competition, which tests students’ knowledge of language, culture, history, geography and current events, and also gives them a chance to meet other students who share their interest in Japan and its language.

“I loved meeting new people at Japan Bowl, and the acts during the competition were pretty fun, too,” said Saila Salam, a student at Lake Braddock Secondary.

Students were divided into levels 2, 3 or 4 and competed based on how long they studied Japanese. Succeeding at the competition requires commitment from all team members, especially because students must know about topics that their textbook may not cover.

“The students form a group in the late October. Because the area of study is so large, we normally divide up among the group,” said TJHSST Japanese teacher, Koji Otani. “For example member A is specialized in history and member B is specialized in kanji and so forth…The upperclassmen give advice and check the study guide that younger students make.”

“We accumulated study packets for the competition starting in January. I studied for the months leading up to the competition in moderation and really crammed the last two weeks,” said Cheung. “My favorite part about Japan Bowl this year was reuniting with my friends that I met in Japan last summer, as well as being able to compete with them in the final rounds.”

While placing at the competition is significant, teachers hope that participating in the Japan Bowl will motivate students in their language study and also cultivate interests in other languages.

“I prepared by reading books on Japanese grammar and vocabulary,” said Mason Beldon, a student at Langley High School. “My favorite part was simply learning so much information. I now know so much more about a topic I’m interested in. I plan to continue taking Japanese throughout high school and into college if possible.”

“I will definitely study Japanese for rest of my life and possibly French or other languages,” agreed fellow student Ikgyu Shin at Langley.

“I plan to learn Chinese and Korean,” said Ngan Bui, a student at Lake Braddock.

For other students, careers related to Japan are of interest.

“In college, I want to study Japanese and go to Japan to teach English,” said Jay Bruce. “Seeing how much the other students knew [at the Japan Bowl] was impressive. It’s crazy to see how much dedication goes into it.”

“I moved from Italy and started school at Hayfield in the middle of the school year. Spanish, French and German classes were already full, so I had to choose between Arabic, Latin and Japanese. I chose Japanese and would like to possibly transfer to a Japanese university later on.”

“Level 1 was the easiest level. The grammar is the toughest part,” said Bruce.

THE JAPAN BOWL was developed and has been sponsored by the Japan-America Society of Washington D.C. since 1993. This year’s Japan Bowl competition was held April 14-15 at the National 4-H Center in Chevy Chase, Md.