Letter to the Editor

I am a West End resident living near Patrick Henry School who strongly supports arts education in our schools because it has such a high value, both in terms of helping children enjoy school and because, as the research shows, arts education stimulates creativity, helps children learn new skills and improve their academic performance. 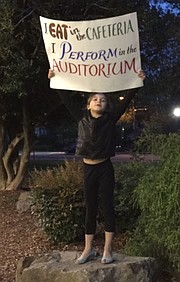 Expressing an opinion about the auditorium.

I am disappointed because Alexandria City Public Schools (ACPS) staff have not taken into account local residents’ interest in including an auditorium in the new school.

When discussions about this project began, people who raised this issue with planners were told it should not be brought up until the issues relating to the footprint for the buildings for the site were resolved. Many thought providing input on this issue from the public was important because it could impact the buildings and site.

At the last meeting of the Patrick Henry Project Advisory Committee this matter became a major point of disagreement. A clear majority of the people on the advisory committee indicated they wanted a real auditorium not the shared use cafetorium, being promoted by ACPS which would serve as a cafeteria, meeting space and performance space. All of the representatives of three civic associations, as well as those from the Patrick Henry PTA, local community members and Councilwoman Del Pepper all indicated that they wanted an auditorium. School Board Vice Chairman Christopher Lewis indicated he would see what could be done to raise the issue with policy planners.

Parents, teachers, neighbors, members of the PTA and students have signed a Petition to Save the Auditorium at Patrick Henry. The matter is to go before the School Board on Thursday, May 5, at the 7 p.m. meeting. The Alexandria Commission for the Arts voted to support the community in their petition for an auditorium.

Advocates suggested when the auditorium was not in use it could be rented out to performing arts groups thus increasing support for this venture by providing a benefit to the local community, especially if arts groups work with the school and local residents to plan programs and a facility of benefit to all.

Hopefully others will share their views with School Board and City Council members to support the inclusion of the auditorium in these plans.