On April 28, the family of Jose Luis Ferman Perez met the girl who was at least partially responsible for his death. The defendant, 16-year-old Leidi Granados Gutierrez, is one of three MS-13 affiliated suspects connected with last year’s Nov. 9 homicide of Jose Luis Ferman Perez. Gutierrez was charged with one felony count for destruction of evidence of murder. This was the first of three trials in connection with the Beverley Park homicide, but Gutierrez’s role in the gang and in the homicide was complicated. 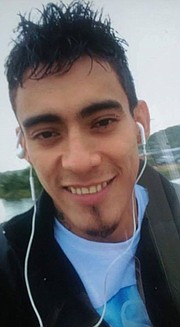 Photo of Jose Luis Ferman Perez, from a gofundme established by his family to assist with funeral expenses.

“I’m certain you had no belief that he would lose his life, but I do believe you knew what the gang was capable of. At the minimum, you knew he would not leave that park in the condition he came in.”

According to the prosecution, Gutierrez lured Luis Ferman into the park with the promise of sexual favors, where police allege Reinaldo Mauricio Portillo Membrano and Alvaro Enrique Saenz Castro struck Ferman Perez with a knife and a machete until he had been nearly decapitated. But Gutierrez’s attorney, Phoenix Ayotte Harris, argued Gutierrez’s long history of abuse at the hands of MS-13 had left her another victim of the gang.

Harris said Gutierrez grew up in El Salvador, where she was kidnapped and abused twice by MS-13 as a child. According to Harris, the encounters resulted in severe trauma and both physical and psychological scars, stunting some aspects of developmental growth and leading to two attempted suicides. Harris provided a psychological report to the court, but because Gutierrez is a minor, the report was sealed from public record. During the second abduction, Harris said Gutierrez was held for months, but eventually stole money from the gang and made her escape. But when she came to Alexandria, Gutierrez met and began dating the 21-year-old Castro, also charged in the murder. Castro was affiliated with MS-13 and introduced her to other members, who knew about her past in El Salvador and that she had stolen money, and used the knowledge to coerce her into participating in gang activities.

A part of the verdict centered around whether or not Gutierrez, an undocumented immigrant, would receive a protected immigration status sometimes offered to someone found guilty of a minor crime. Given Gutierrez’s past in El Salvador, Harris argued that putting a conviction like this on the defendant’s record would make her a target for immigration sweeps and could result in Gutierrez being deported back to the country where she’d been repeatedly kidnapped and abused.

“She’s terrified for her life,” argued Harris. “Putting this conviction on her record could be a death sentence.”

Instead of being placed into the Juvenile Justice system, Harris argued she should be sent to the Gang Intervention and Prevention Program, to eventually be moved with her father to an area outside of MS-13’s reach.

But the prosecution argued that those protections would deny justice to the family of Luis Ferman.

“She took her tragedy and made it someone else’s. She passed that violence on,” said David Lord, Senior Assistant Commonwealth's Attorney. “If not for the choices the defendant made, Ferman would be here. With all of the trauma she experienced at the hands of MS-13, she knew knew what they were capable of and she delivered him like a lamb to the slaughter to a pack of wolves.”

Lord didn’t argue that Gutierrez killed Luis Ferman or even that she knew the gang would kill him, but that she did know Luis Ferman would come to some kind of harm as a result of her actions. The only witness called before the court was Carmen Ferman, the victim’s mother. She was flanked in the galley by family and friends of Luis, all with white shirts bearing messages of love and remembrance for the deceased. Of Carmen Ferman’s seven children, Luis was the oldest, and she said he had helped make her life in this country something special.

“This has been very hard. He was a beautiful, good person,” Carmen Ferman said with the help of a translator. “He was the most beautiful thing in my life. He was the best thing we had in this country. We dreamed of a future here. Now three children will be left behind who won’t know their father.”

Carmen Ferman said her son used to send her text messages every day, asking her “how’s the most beautiful woman in the world?”

“He was my support as a single mom,” said Carmen Ferman. “He was my right hand; emotionally, physically, financially. Not having my son in my life, it’s like my life has been taken. He’s the only one I had in this country. I have lost all my happiness. Every moment, every minute, every hour, I don’t believe he’s dead. I believe he’s going to stop by and say ‘what’s up, mom?’”

Afterwards, Gutierrez wept and apologized to the family.

“I was in a difficult situation and I didn’t know what to do,” said Gutierrez. “I made a bad decision, I made a serious mistake. I am so sorry something so horrible happened to Luis … I didn’t know what was going to happen to him.”

But despite being moved by Gutierrez’s apology and the description of her upbringing in El Salvador, Judge Nolan Dawkins decided that the Commonwealth had already shown enough leniency in not charging her in the murder.

“I recognize your youth and your trauma,” said Dawkins. “Part of that trauma was with MS-13 and it taught you about violence. I’m certain you had no belief that he would lose his life, but I do believe you knew what the gang was capable of. At the minimum, you knew he would not leave that park in the condition he came in.”

Dawkins committed Gutierrez to the Department of Juvenile Justice for an indeterminate sentence, with three years of adult incarceration suspended but under supervised probation upon her release from the juvenile system.

Judge Dawkins argued that the gravity of Gutierrez’s crime made her ineligible for the protected status.

“I recognize the potential harm if returned to [El Salvador], but I have no control over that,” said Dawkins. “Whoever makes that decision will have to decide if you have suffered enough.”