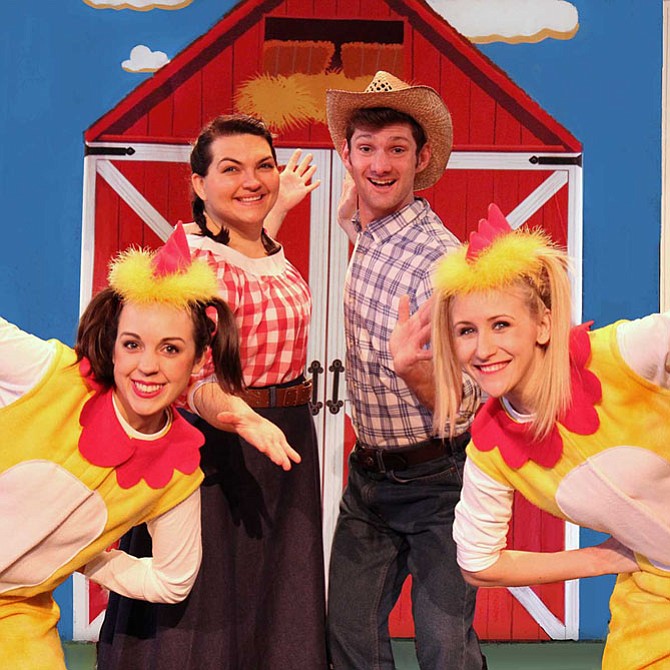 Light-hearted musical silliness from colorful family fare will soon arrive at the McLean Community Center. The show is “Chicken Dance” a musical aimed at the younger set and their parents with a valuable message to be shared.

“Chicken Dance” began life as an award-winning children’s picture book by Tammi Sauler with illustrations by Dan Santat. Then the nationally recognized ArtsPower turned the words on a page and the illustrations into a fast moving one-hour, seven number musical portraying the story of two feisty chickens named Marge and Lola on a personal quest.

Children and families will get to know Marge and Lola who want to win tickets for an “Elvis Poultry Show.” Winning requires Marge and Lola to compete against other barnyard animals, such as some unkind ducks who think they have the contest locked-up. After all, the ducks tend to sneer that chickens can’t possibly win; chickens have no talents. “All a chicken can do is bawk, flap, and shake.”

Audiences of all ages become involved with Marge and Lola with their quest to not only show up risking humiliation, but to find their natural talents in time to compete.

Kathleen Herr, director, youth programs, McLean Community Center spoke highly of the ArtsPower production. "’Chicken Dance’ is really funny and wonderful. We have used ArtsPower before and their productions are wonderful.”

The “Chicken Dance” cast includes “very talented actors, great singing, energetic dancing and plenty of poultry characters” according to Blackman. For parents, the essence of the show is that “everyone has a talent, even if hidden away deep inside. Talent is just waiting to be found and come out.”

Without giving away how Lola and Marge finally fare, there is lesson for the audience; “never give up.” said Blackman.

So, with summer not too far away and school ending before too long, “Chicken Dance” at the McLean Community Center offers a great opportunity to spend some quality time as a family. There will be plenty of laughter and learning. But, hurry, according to Kerr, tickets are already flying off into the hands of an eager audience.