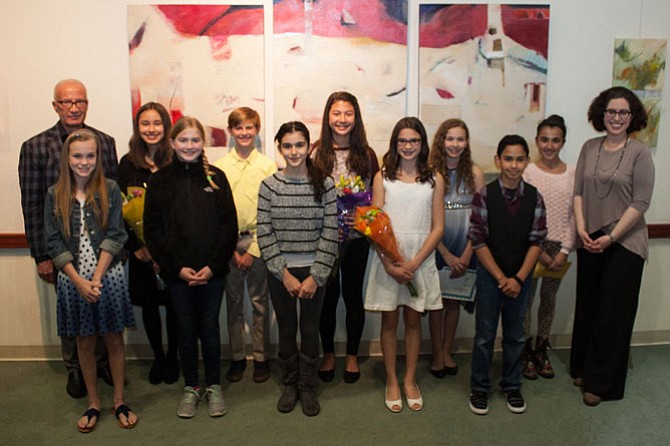 The audience erupts in laughter as animated Henry Cole tells young writers that he is pulling on their sleeves, just as his eighth-grade teacher did when she recognized his ability to write short stories. The award-winning author and illustrator said making connections such as these are important throughout life. Cole was the featured speaker at the Youth Writing Awards Gala on Saturday at the Great Falls Library.

Participation in a local writing contest is the confidence catalyst some sixth-graders needed to push their creativity and consider writing for their futures. In front of a standing-room-only crowd, the Great Falls Writers Group (GFWG) named the winners of its 2016 Creative Writing Contest Saturday, April 30, at a Youth Writers Awards Gala. GFWG invited all Great Falls sixth-graders to write an essay or short story judged by best-selling authors and college educators. The process took months, culminating on Saturday with a gala. Award-winning author and illustrator Henry Cole offered young writers words of encouragement and winners received cash prizes.

“This contest solidified to my son that writing is a big deal,” said mother Susan Tibbs. “Ever since the contest day in February, Luke has spent time writing and creating lyrics. He chose to skip baseball for this event tonight.”

Fellow Forestville Elementary School student Riley Luce finds most writing assignments difficult, but he enjoys the creative aspect so he entered the contest and became a finalist.

Julia Toloczko from Great Falls Elementary School was surprised to be named top ten. She doubted her work, which now she knows is something most professional writers experience daily. She learned her words carry weight and have value.

Cecelia O’Sullivan didn’t think she’d win first place and $150, but she practiced writing prompts and entered anyway. “I didn’t expect to write about a topic that seemed so simple — shoes. But my story was much more complex than I thought would come from a one-word prompt.” The student from Great Falls Elementary wrote about a shoe representing family members and memories.

CONVERSATION among students reveals that the contest encouraged entrants to keep writing daily for fun.

Cole explained that this awards ceremony is a big day for these students because they’ve made a connection to writing that could influence their professional lives.

Growing up in Northern Virginia, Cole — a former science teacher at Langley School in McLean — did not think he would one day be sought by publishing companies to illustrate or write the next award-winning children’s book, but he’s living a dream of many writers — a dream that started in the eighth grade when a teacher encouraged him to use his drawings to accompany a short-story assignment. Decades later, Cole routinely meets with childhood mentors and educators to share work and inspiration.

The gala offered a surprise for Cole, too. MIT-graduate Mikhail Shenoy brought his child to meet his fifth-grade science teacher. “Mr. Cole made me a scientist,” Shenoy said. “He answered every question, and I had many.” Shenoy thanked Cole for igniting a love of learning.

“Our goal as teachers is to make connections with students,” said Mary Lou Carmack, vice principal of Colvin Run Elementary School. “This contest made a valuable connection.”

“Here we meet the next generation of writers,” said Michelle Miller, president of the Friends of the Great Falls Library that sponsored the event. “It seems a natural fit to pair a party with this purpose — children celebrating reading, recognizing peers, hearing a children’s author and eating food — which always gets kids excited.”

"The collective pride in the room tonight is palpable. There is nothing more important than inspiring a group of young people to write, write, write, every day,” said Kristin Clark Taylor, GFWG founder. “That the Great Falls Writers Group took up that charge gives deeper meaning to our group mission, which is to celebrate, always, the power of the written word."

PARENT AND TEACHERS found value in Cole’s message, too. “I needed to hear what Cole said tonight.” said Beth Jannery, a contest judge and journalism professor at George Mason University. “I’ve had a challenging week working with a few students, and Cole reminded me that the extra effort is worth it.”