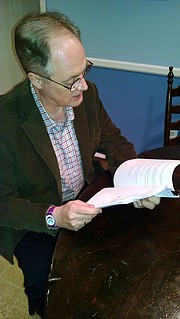 The 18-month closure of the Vienna Community Center – renovation time – precipitated some scurrying around by groups that regularly used the center for programming and special events. The closure presented an opportunity to the Vienna Theatre Company (VTC) to extend its reach out of community theatre comfort zones. VTC has looked to the past for inspiration in its upcoming spring production --- the theatre company presents its offering as 1940s “radio” programs. Six actors play a multitude of roles in “In Living Sound,” opening Friday, April 1, in the Flame Room of the Vienna Volunteer Fire Department. Two radio mysteries, “Adventures of the Thin Man: The Case of the Goofy Groom,” and “The Big Story: Manhunt in Manhattan,” are acted out with recorded sound effects to accompany the narration.

“This is fun for one-and-a-half hours because the scripts are engaging and zany and you get to watch a group of grownups act silly,” said director and VTC president Tom Epps of Oakton. “Another plus is that this is a way to support our partner, the Vienna Volunteer Fire Department.”

THE FRIDAY NIGHT SHOW prices are for “broadcasts” only; tickets are $14 for the performance. Hot food and drinks are available for purchase from VVFD Auxiliary beginning at 7:15 p.m.

Saturday night performances are dinner-theatre with food prepared by the Auxiliary of the VVFD. Dinner menu offers baked ziti, salad, bread, and dessert, along with beverages.

Saturday ticket cost is $25 in advance and $30 at door. The dinner theatre package includes the show and meal. Food service begins at 7:15 p.m., and showtime is at 8 p.m.

Epps and artistic director Jessie Roberts looked through radio scripts that would appeal to the community and each found an appropriate gem, “Adventures of the Thin Man: The Case of the Goofy Groom,” and “The Big Story: Manhunt in Manhattan.” “The Case of the Goofy Groom” shares the comic bent of the Thin Man series, while the second rings of the vintage hardboiled detective/crime solver genre. Both plays facilitate storytelling. The actors act out as if they were on a visual stage, but, they are standing at a microphone. The Flame Room does not have a raised stage, and a stand-up play, requiring no sets or props, aligns itself to the resources available.

“An audience likes to listen,” Epps said. “Think Prairie Home Companion. Listening is what you do with a podcast, so, young tech-savvy people are familiar with listening tools.”

Sound and sound effects are very important in radio, Epps said. Change of scene is cued using music. “If you were listening to a radio drama, you would know the scene changed by a music introduction.”

“Adventures of the Thin Man: The Case of the Goofy Groom,” and “The Big Story: Manhunt in Manhattan,” were introduced to the radio public in the late 1940s.

“Manhunt in Manhattan” alone has 26 characters. That play, the second of the two, is a crime melodrama in which a hardboiled reporter for the Daily News sets out to solve a murder that stumped the police. “There are a lot of New York characters in this one,” said Epps. “And the actors have to take on different accents, different attitudes, as they change character.”

“The Adventures of the Thin Man” features big screen favorites, sleuths Nick and Nora Charles. The married couple takes the places of two newlyweds whom someone wants out of the way. Who – and why – would someone would want to kill the Goofy Groom? Nick and Nora, armed only with their wits and quips, take on the mystery.

"In Living Sound,” presented by the Vienna Theatre Company and Vienna Department of Parks and Recreation, runs April 1, 2, 8, and 9 in the Flame Room of the Vienna Volunteer Fire Department, 400 Center St. S, Vienna, corner of Center and Cherry streets.

Visit www.viennatheatrecompany.org for more details about the show and to purchase tickets online for "In Living Sound."