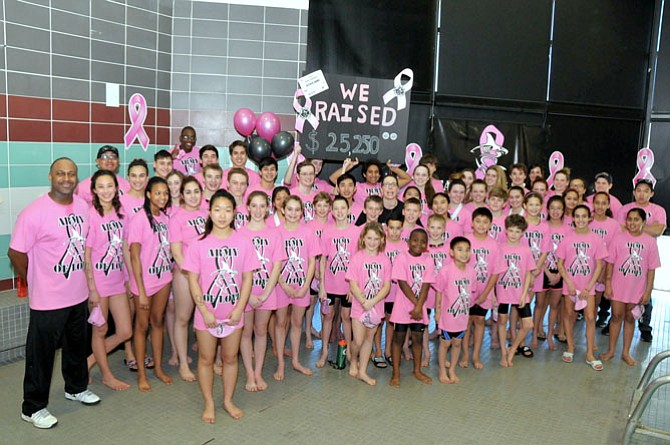 The To family of Springfield has had three children participate in the swim marathon in each of its six years running: (from left) Holly To, coach Patty Friedman of Fairfax Station, mother Jennifer To, Christopher To, Nicole To and William To.

For the sixth year, swimmers piled on miles of laps in the pool, raising money to support their coach and the Avon Walk to End Breast Cancer.

Each swimmer collected donations and then swam between 110 and 155 laps; the latter were referred to as “going the extra mile.”

“It was truly one of the most beautiful marathons,” coach Patty Friedman of Fairfax Station said in an email.

Friedman walked in the Avon Walk to End Breast Cancer and raised money independently for several years before getting the team involved. In the six years of the marathon, the team has raised $100,000, she said.

A number of swimmers completed the marathon and extra mile despite injuries. Friedman said one athlete with a cyst on her breast provided the group more motivation and a reminder that part of the money they raised will help women who otherwise wouldn’t have access to top surgeons.

“These kids have paid for a lot of mammograms and breast surgeries over these years,” Friedman said.

“The event is very important to me because at any point in time someone I know could be diagnosed with breast cancer,” he said in an email. “Even if it isn't somebody I know, I'm glad I can raise money to help anyone who is diagnosed with it.”

As in past years, supporters from Shark Tank will accompany Friedman to the start of the two-day, 39.3-mile walk, beginning in Washington, D.C.

For more information or to make additional donations, visit www.tinyurl.com/tank2016.