Rochefort: Officer of the Year
Votes

Rochefort: Officer of the Year

Wrote third-highest number of traffic tickets in the county.

PFC Brian G. Rochefort has been named the Sully District Police Station’s 2015 Officer of the Year. And although he couldn’t be present to receive his award, he was honored during the Feb. 10 meeting of the station’s Citizens Advisory Committee. 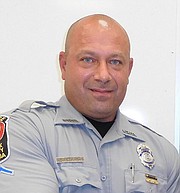 He’s a member of the Traffic Enforcement Team and was previously recognized as the Officer of the Month for August 2015. At that time, 1st Lt. Matt Owens, the assistant station commander, said Rochefort “goes after speeders, red-light runners, etc. He puts out the radar trailers, variable message boards and traffic counters and excels at ticket-writing. He’s been here since 2009 and, this year [2015], is the number-one ticket-writer in all of Fairfax County. And that helps keep us safe on the roadways.”

In nominating Rochefort as the station’s Officer of the year, Lt. Jason Brusch said

Rochefort was nominated and selected for this award by his peers, “which speaks volumes of his character and his tireless dedication to service.”

“Traffic incidents resulting in death and serious bodily injury represent a primary concern amongst law enforcement agencies throughout the country,” said Brusch. “In order to aggressively address this problem, commanders from the Sully District commenced several initiatives throughout 2015 which aimed to educate residents and promote compliance with state and county traffic statutes.”

He wrote that Rochefort was “an integral part of these operations, as he routinely monitored traffic-related issues throughout the Sully District and targeted his enforcement efforts accordingly. Subsequently, PFC Rochefort was able to stop and make contact with well over 1,500 motorists in 2015. Furthermore, he is credited with issuing the third-most traffic citations of any Fairfax County Police Officer last year.”

According to Brusch, Rochefort’s comprehensive knowledge of the state and county traffic codes is routinely called upon by his peers and supervisors when investigating complex, motor vehicle-related incidents. “Moreover, his steadfast dedication to traffic enforcement certainly exemplifies the Fairfax County Police Department’s commitment to promoting traffic safety and compliance amongst motorists,” wrote Brusch. “It is without question that PFC Rochefort’s leadership, positive attitude and unparalleled commitment to traffic enforcement is deserving of the 2015 Sully District Station Officer of the Year.”