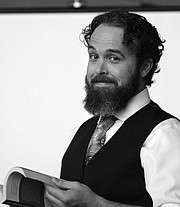 Sean Aiken, head of school of BASIS Independent McLean, is blazing the trail for Tysons Corner’s first preK to 12th school. Raised by educators, most recently, he headed up two nationally ranked schools. For more information, go to http://mclean.basisindependent.com or call 703-854-1253.

"I love how BASIS Independent students do vector calculus, but also read Kant…this perspective, that you can be inspired by many different ways of thinking and investigation, is really important to instill in students,” said Aiken.

Aiken was a crucial member of the leadership team that built BASIS Oro Valley in Arizona which was ranked number one by The Washington Post in 2015 and, again in 2016. He was an English teacher, soccer coach, developer of the first seventh grade Logic curriculum, the school's founding college counselor and finally the Head of School. In 2013, Aiken relocated to Washington D.C. where, as head of school, he led BASIS Washington DC and its faculty to achieve Tier 1 status and recognition as the No. 2 charter school in Washington, D.C. in only the school's second year of operation.

School registration is underway for Tyson Corner’s new school, BASIS Independent McLean. The school will be located at 8000 Jones Branch Drive in McLean and opens in August 2016.