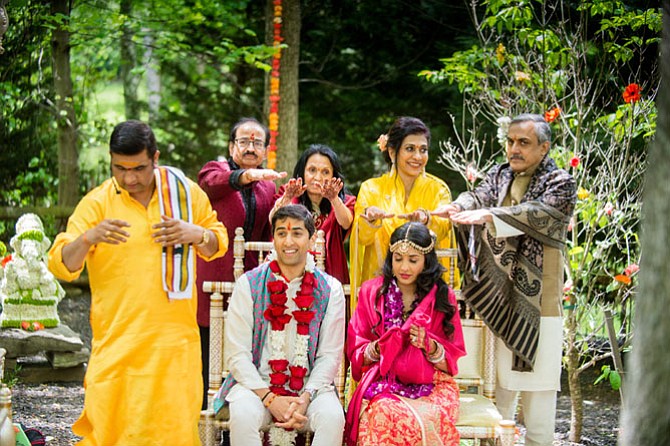 Pandit Shri Tripathiji of the Rajdhani Mandir in Chantilly (left) presiding over a ritual puja welcoming Riddhima (seated, right) to the Mehta family home after her marriage to Neil (seated, left), with the blessings of their parents (standing from left, Dinesh Mehta, Raksha Mehta, Shabnam Gandhi and Guarang Gandhi. The puja was performed on May 15 at the Mehta residence in Great Falls.

Neil and Riddhima performing their first dance to "Tumhi Ho Bandhu" (translation: You are My Soulmate) from the Bollywood movie "Cocktail" at the reception at River Bend Golf and Country Club.

Neil and Riddhima arriving at the reception at River Bend Golf and Country Club.

The lead up to the traditional Hindu wedding ceremonies in India in December included a traditional Mehendi, or henna ceremony; a Sangeet, consisting of musical and dance performances by friends and family and a Baaraat, or wedding procession, by elephant and boat.

The U.S. celebrations in May included a reception at River Bend Golf and Country Club, with several Bollywood-inspired dances and performances by friends and family, as well as a "Laxmi Pravesh" at the home of Dinesh and Raksha Mehta, with a ritual "puja" to welcome their new daughter to their home.

The couple met in Palo Alto, California, in January 2011, where they were both pursuing graduate degrees at Stanford, she a master’s in international policy and he an M.B.A.

The bride, 28, is a consultant for Castalia, an advisory firm based in Washington specializing in infrastructure development in emerging markets. She graduated with first-class honors from Cambridge.