Chantilly High is Ready to Take the Stage
Votes

Chantilly High is Ready to Take the Stage 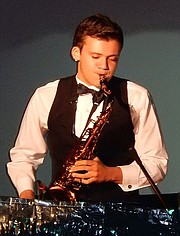 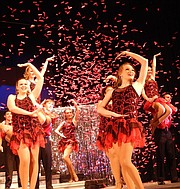 Every year, Chantilly High’s springtime extravaganza, Jazz & Pizzazz, is a special event filled with singing, dancing and music. And the 2016 show promises to be another one to remember because it’s the school’s 30th annual.

It bursts upon the stage this week — Wednesday, June 8, through Saturday, June 11, at 7 p.m. in the Chantilly theater. Tickets are $10 at www.chantillychoral.org.

Nearly 50 students will perform in this high-energy show. Entertaining will be the choral ShowStoppers, plus the Chantilly Jazz and Jazz Combo, which accompanies the Showstoppers during their competitions.

“There’s a wide variety of music, so anyone in the audience will be able to find songs they know and like,” said Choral Director Evan Ayars. “It’s an affordable night of entertainment for the whole family.”

To celebrate three decades of Jazz and Pizzazz, this Friday’s show will honor the event’s alumni. They’ll sing a song from the movie, “Hairspray,” called “Come So Far,” along with the jazz band and choral students. And when the alumni sing solos during this number, some of the ShowStoppers will put on a fashion show. Ayars said they’ll model “all the crazy clothes we used to wear in previous Jazz and Pizzazz shows through the years.”

The program will include songs ranging from old standards, such as “Fly Me to the Moon” and a vocal jazz piece called “All the Pretty Little Horses,” which the musicians and singers will perform together. It will also feature today’s hit songs, including “Shut Up and Dance” by Walk the Moon and Sam Smith’s “I’m Not the Only One.”

Two a cappella numbers sung by the choir alone will be “Das Sound Machine” from the movie “Pitch Perfect 2” and “Sun and Moon” from the Broadway play, “Miss Saigon.”

In addition, eight students will sing solos on different nights. “They’re very talented,” said Ayars. “And many of them will have students performing contemporary dances behind them, as they’re singing, to add another level of interest for the audience.”

Also looking forward to the show is Band Director Chris Singleton. Among the music his students will play is an arrangement of “March Slav,” an up-tempo swing number and “I Remember Clifford,” featuring Nathan Rhodes on trumpet.

“There’ll also be a patriotic medley, ‘Amber Waves,’” said Singleton. “And our big highlight is a song made popular by drummer Buddy Rich. It’s called ‘Waltz of the Mushroom Hunters’ and features one of our senior drummers, Kevin Slappey.”

The alumni band members will perform “Manteca,” a Latin swing song, by themselves. It was written and made popular by jazz great Dizzy Gillespie.

Singleton said his students have been playing a few of the pieces in the show all year. “And they’ve been working really hard to get everything ready for Jazz and Pizzazz,” he said. “There’s a lot of music, so a great deal of focus goes into preparing for a show this long.”

“They’re doing a great job, and we’re excited to perform it all,” continued Singleton. “There’s something for everyone, and it’s great to see all these kids put so much dedication into this show, working for a common goal.”

Ayars said his students “look forward to this every year and it’s the biggest thing they’ve got going on. And it’s energizing for me, as a teacher, to see how excited they get about it.”

Jazz and Pizzazz also attracts huge audiences each year, including parents who’ve children have long graduated and people with no connection to the school, at all. That’s because, over its history, Chantilly’s Performing Arts Department has earned a reputation for putting on top-notch, professional-level shows, including this one.

“At Jazz and Pizzazz, people get to see live entertainment and really high-quality performances,” said Ayars. “This is a great, community event that I’m happy to be a part of and a tradition I’m glad to continue.”