New Homes for Arlingtonians in Need

“In terms of affordable housing, we had nothing but positive things to say about it.” 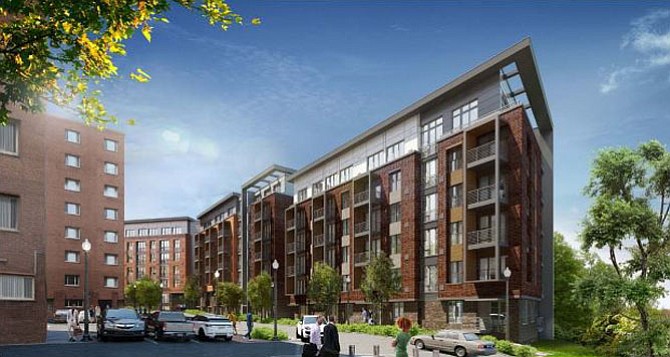 The long struggle against declining affordable housing in Arlington just received a boost. The expansion of the South Rhodes Street project near Columbia Pike will include 105 new committed affordable housing units. More than half of those units will be multi-bedroom apartments.

At the July 20 County Board meeting, board members praised the new affordable housing and unanimously approved the project.

“This is a very robust, very effective affordable housing program,” said County Board Member Christian Dorsey. “This is a great mix. This is not going to be accompanied by any county subsidy. This is a great approach and I think it’s going to be greater that it’s fully integrated into the existing Wellington buildings with no distinctive set aside.”

Dorsey and other Board Members expressed particular support that the project was new housing not drawing on the County’s Affordable Housing Investment Fund.

The steady increase in regional rents.

The site is currently 711 market-rate units in three existing mid-rise buildings. The plan proposes a fourth building on the site over an existing parking lot and amenities. The new six-story building would contain 401 units. As part of the redevelopment, 105 of the existing residences will be converted into committed-affordable housing. Of the committed affordable units, 53 will be two-bedroom units and 14 will be three-bedroom units.

Current rents average 80 percent of the area median income, or an average rent of $1,600 per unit. Members of the County Board expressed enthusiasm that the project’s non-committed affordable units still generally fell within an acceptable range of affordability. In 2015, the average rent in Arlington rose to $1,977. According to the Annual Affordable Housing Targets Report for 2015, the steadily increasing cost of rents between 2011 and 2015 meant that 1,644 units had been affordable to residents at 60 percent of the area median income, 31 percent of the County’s affordable rental stock, were no longer affordable.

Kathleen McSweeney, a member of the Planning Commission, said the Commission had considered the project at their July 7 meeting and discussion primarily centered around the new building’s effect on traffic in the neighborhood. McSweeney said the County is aware of the issues with traffic and is working with the Virginia Department of Transportation to resolve them.

“In terms of affordable housing, we had nothing but positive things to say about it,” said McSweeney. “This is the first development to use the affordable housing formula set forth in the neighborhoods plan, to take existing market-rate and convert to affordable to achieve more density on the site with new construction.”

To many on the County Board, the project’s emphasis on affordable housing merited the reduction in the parking requirement and the potential traffic increase.

“To me, this is...designed to maximize our ability to achieve the goal, a goal that no one in the country has tried to adopt: no net loss of affordable housing in this corridor,” said County Board Member Jay Fisette. “Looks like we’ve taken a very important step to accomplishing the goals of that plan.”