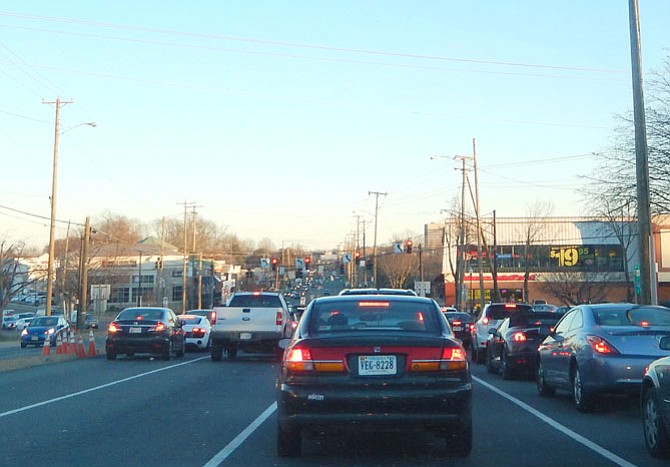 The City of Fairfax is making major improvements to the Kamp Washington intersection (Routes 236/Main Street, Route 29/Lee Highway and Route 50/Fairfax Boulevard) and its surroundings. Work began last week, with the ultimate goal of increasing capacity while providing more safety and mobility for both vehicles and pedestrians.

Ardent Co. is doing the construction work and Volkert Inc. is the construction manager. The scope of the project includes eliminating the horizontal shifts along Fairfax Boulevard/Main Street through the main intersection, plus providing an additional southbound lane on Lee Highway from the Kamp Washington intersection to the existing third southbound lane near the Shell gas station.

It also includes extending the westbound through lanes on Main Street from Chestnut Street to Hallman Street and lengthening turn lanes to provide additional storage for turning vehicles. In addition, it will improve pedestrian mobility with new crosswalks, curb ramps, sidewalks and pedestrian signalization.

The span-wire traffic signals will be replaced with mast arm signals; and improving the signal phasing and operation should relieve congestion and optimize traffic flow at the Kamp Washington intersection. The work will also increase the capacity of the dual left-turn lane from eastbound Fairfax Boulevard to northbound Fairfax Boulevard/Lee Highway. And traffic should move more smoothly along westbound Main Street.

PROJECT COST is $11.6 million: Preliminary engineering, $1 million; right-of-way acquisition and utility work, $4.1 million; and construction, $6.5 million. The vast majority of the work is funded by federal and state money.

“This project will probably get into full gear in the spring,” said Sanford. “And a lot of the work will be done at night to minimize disruption. It’ll take about one-and-a-half to two years [to complete], weather permitting.”

Access to businesses will be maintained throughout the construction and only one entrance will be closed at a time. Nonetheless, said Silverthorne, “There’s going to be some short-term pain for the long-term gain.”

The work is slated to be done in phases, with installation of an 8-inch water main set for this week (Jan. 18-22). Phase one – from this January to January 2017 – will consist of improvements to Route 50 and the service road, Lee Highway and Main Street. It includes sanitary sewer and drainage pipe installation, plus construction of new sidewalks and concrete entrances. Then will come road and traffic-signal work.

Phase two, from December 2016 to April 2017 (estimated) will entail finishing pedestrian crosswalks, building medians, completing the traffic signals and laying down the final asphalt for the entire project. For more information, call 703­385­7810 or go to www.kampwashingtonimprovements.com.

Summers also updated the Council on the status of the City’s Northfax project, which will:

“We’ll be putting out an RFP [request for proposals] for a construction-management firm to oversee the construction,” said Summers. “Then this will go to bid in February and to the Council in March.”

Construction is expected to go from this summer to summer 2018. It is a nearly $20 million project, and Sanford said the City has applied for an additional $1.5 million in revenue-sharing funds for it.

Currently, she said, $9.5 million is coming from the federal government, about $9 million from the state and around $87,000 from the City’s General Fund. However, said Sanford, “When the bids come in, that [last] number may change.”

“I’ve had more complaints about our road paving, in the past six months, than in my 20 years in office,” said Silverthorne. “Layton Hall Drive is a mess. I was shocked at how bad it was when I saw it today; it really needs repaving.”

“We average over 120 water breaks a year and have a lot of pipes 50-60 years old under the streets that cause the roads to deteriorate,” explained Summers. “So all these things affect the paving.”

The Council members then discussed the problems of having brick streets. “We’ve converted some sidewalks around the perimeter of downtown from cement to brick pavers,” said City Manager Bob Sisson. “But they’re higher maintenance and are a recurring expense. So should the City Council have some policy about limiting them, going forward?”

“We should look at the maintenance costs and policies to minimize or reduce them,” said Councilwoman Janice Miller. “If we’re spending $100,000/year on brick sidewalks and some are in poor repair, we need to look at this. I think it’s time to reexamine our policy [requiring them in certain areas].”

“A portion of that $100,000 is just spent on re-mortarizing the pavers,” said Summers. “We feel that the [brick sidewalks] we’re replacing now – with better techniques – will last longer than the ones we did a long time ago.”

For that reason, said Councilman David Meyer, “I’m willing to support the funds [needed] to maintain these sidewalks.”

Miller, however, said she’d like to see “some information on something between brick and cement sidewalks.” Silverthorne then said they would put this item on the agenda for a future work session.