The Absurd Beauty of Everyday Life at Herndon's NextStop
Votes

The Absurd Beauty of Everyday Life at Herndon's NextStop 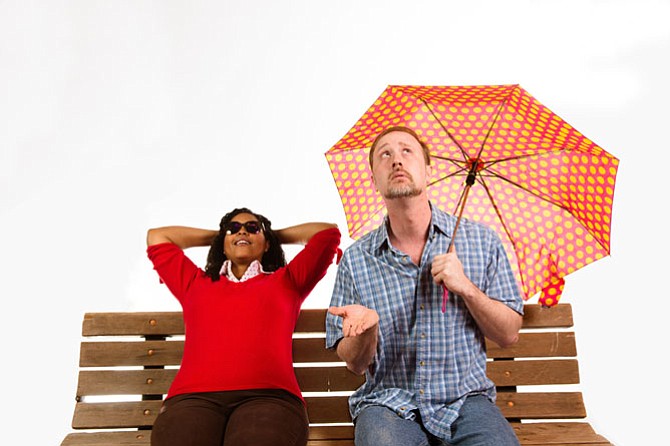 A quirky comic play with profoundly heartfelt themes is coming to Herndon. Written by award winning, contemporary playwright Will Eno, “Middletown” is a “modern companion to the beloved Thornton Wilder classic, ‘Our Town,’” said Evan Hoffmann, NextStop artistic director. “The play is about the suburbs: community, values, and the way we interact with one another,” added Hoffmann.

“Middletown” follows the lives of small town citizens as they interact. It unfolds in a series of scenes and encounters as the townsfolk crisscross from a local library to a park bench, from deep outer space to points right in the middle of the whole shebang. The glue to the play is the developing relationship between Middletown residents John Dodge and Mary Swanson who is new to town.

The audience also becomes an integral active part of the play during an unusual “intermission.”

“The play is strange yet accessible. It is about how we live our lives, the struggles we have with ourselves and with others,” said director Michael Chamberlin. “What keeps us going in our daily lives” is key to the play. The citizens of the fictional Middletown are played by a cast of 10.

Actor John Stange describes his character John Dodge, a part-time plumber and lots else as a “very intense eccentric loner; a likeable character trying to find his place. He is slightly neurotic, unstable, oddball, and fun.” One of his lines gives a sense of the character as he discusses that he is between two lousy jobs; “I just don’t know what the second one is yet.”

Tamieka Chavis plays Mary Swanson, another character struggling to find a place as new arrival to Middletown. “She has a soothing personality, but she needs a great deal of validation and reassurance about herself. She needs desperately to connect with others and she is very lonely as her husband travels often. “

For the audience, “Middletown” will be more than glimpsing as characters John Dodge and Mary Swanson are drawn to one another. It is a look into a regular small town and the sweet mysteries of living.

The audience even has an integral involvement during a unique “intermission” during the play.