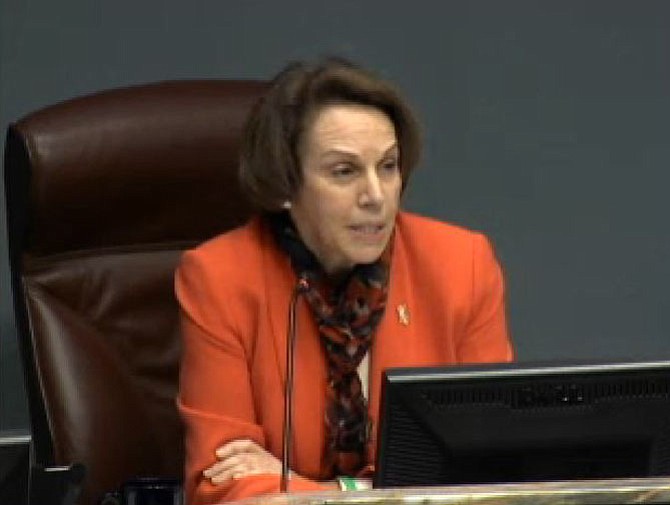 Libby Garvey, chair of the 2016 Arlington County Board

While many of the goals set by the Arlington County Board for 2016 were familiar, like expanding school capacity, signs of the new perspectives and new leadership began to take hold at its Jan. 1 meeting.

“Clearly, some things are going to be different this year, but a lot will stay the same,” said Libby Garvey. “I’m confident that, together, our residents, our businesses, our staff, and this new board will make sure that Arlington delivers outstanding customer service to all our residents and businesses, that every Arlingtonian who wants can have a voice in our government, and that we will work strategically to make this wonderful county even better.” 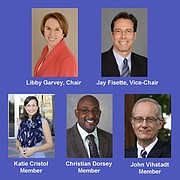 The 2016 Arlington County Board

For Garvey, the top priority in 2016 is refining the county’s “customer service.” Garvey referred to the current permitting and zoning system as “Byzantine” and complicated to the point where many county officials struggle to understand it, much less businesses and citizens. For Garvey, the county must do more than simplify the process, it needs to have the system presented online in an easily explainable format.

Garvey also targeted sign ordinance as another area of stifling regulation in Arlington.

“We have people coming up with really cool and exciting ideas for signs, and then we tell them their ideas don’t fit within the confines of our regulations,” said Garvey. “Part of the charm of Arlington, particularly along the Pike and in our older districts, is how not-standard everything is. It helps create an authentic personality, which draws and keeps people here. Our newer areas like Rosslyn and Crystal City need to be able to try different things as well.”

Another subset of Garvey’s “customer service” focused on transit, a topic which in the past put Garvey at odds with fellow board members. Garvey and the County Board’s independent John Vihstadt opposed the Columbia Pike streetcar project, which was ultimately cancelled in 2014. Garvey expressed frustration that staff had failed to bring forward any substitute transportation policy in 2015, but that later in the month, County Manager Mark Schwartz would report to the board about potential transit plans.

The streetcar was one of several major Arlington projects that saw Garvey clash with Democratic members of the County Board. Garvey’s support of Vihstadt against fellow Democrat Alan Howze prompted her to resign from the Arlington Democratic Party, which says that no committee members or officers could publically support candidates opposing a Democrat.

But if there was lingering resentment from the 2014 election controversy, it wasn’t apparent at the board’s first 2016 meeting. Jay Fisette, vice-chair and most senior member of the board, expressed support for Garvey’s stated priorities.

“I support the chair’s focus on improving customer service, particularly with building permit,” said Fisette. “We can always do more to streamline processes, improve predictability, and enhance customer service.”

But for his own priorities, Fisette focused on problems the County Board has struggled with for years. The biggest challenge, Fisette said, is adding the facilities needed to support Arlington’s growing population in the increasingly limited available space. Fisette specifically noted school overcrowding as part of that crisis. In their last meeting on Dec. 15, the County Board voted to approve a new elementary school’s construction on a parking lot adjacent to Patrick Henry Middle School. The decision was opposed by neighbors, who criticized the project’s lack of consideration for how a new school would impact local traffic, and lamented the loss of park space.

“Land use remains our greatest challenge, both with respect to public facilities like schools and parks, and with respect to attracting and maintaining commercial tenants to restore our tax base,” said Cristol. “Here, we need to follow through on a series of thoughtful, community-generated recommendations from the Community Facilities Study. The study group has urged us to action to address our threatened commercial tax base, and we need to focus this year on efforts to streamline permitting, as our new chair has emphasized, and enabling more temporary commercial space uses to address our threatened commercial tax base.”

Stephanie Pryor, president of the Arlington County Civic Federation, said that the land conflict is one that’s haunted the county for at least the last 100 years since the Civic Federation was founded.

“One hundred years ago, the big questions were still the issues with too many people coming in,” said Pryor.

Pryor also noted that while residents are still coming into Arlington, the county has still struggled to recover from the 2005 Base Realignment that pushed military offices and contractors out of Arlington. Today, Pryor said Arlington faces the added challenge of having to compete with Loudoun County and other outlying suburbs of Washington D.C. for the kind of industry that has normally attracted. While it wasn’t raised by members of the County Board as a 2016 priority, Pryor also noted that sewage and pipe infrastructure is one of Arlington’s unspoken calamities.

“There’s slow leaks going on across the county,” said Pryor. “Look at the age of the pipes. A woman complained for years to Washington Gas about one but received no response. It took the Fire Department coming out to identify the leak ... There’s slow leaks in the water pipes. People don’t realize how much water is going into their yard.”

For Pryor, there are still r questions about Arlington’s infrastructure the County Board needs to answer.

“How much capacity can we have?” asked Pryor. “Can the system handle it?”