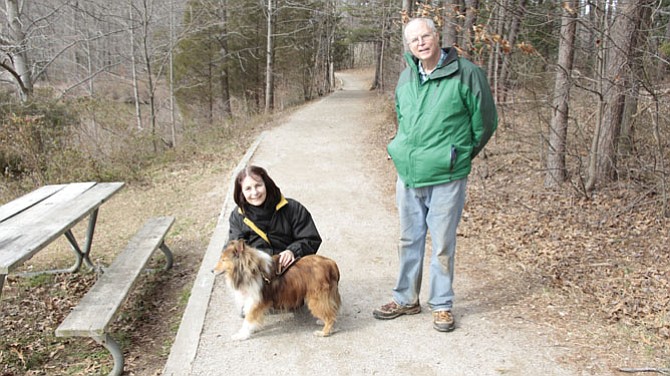 Man's best friend fulfills many roles, and one of these is companionship. Robert Updegrove, a retired library director, spends lots of time with his dog.

Updegrove and his wife, Maria have had their dog for almost nine years now. An especially enjoyable activity is walking in the park.

"He's just been a wonderful companion for me because I'm retired and my wife still works, so we enjoy coming down to the park every morning and taking nice walks, spending lots of time together,” Updegrove said.

Although many dog owners seek out dogs with fierce protective instincts for safety reasons, Updegrove said this was not the case for him.

Updegrove said, “He's very gentle with children and so many of the dogs that people get now are protection dogs and they’re pretty aggressive.”

Owning any pet involves a certain amount of work, but many dog breeds require owners with active lifestyles.

Mark Russell, co-owner of Metro Run and Walk, Springfield, and his viszla, Tanner, enjoy a lot of exercise together. However, dog lovers who value peace and quiet should not get a viszla, according to Russell.

"They love people and they're really active. I do a lot of walking, running and stuff, and so does my wife, so he's a good dog for that," Russell said.

In addition to exercising, Russell said he enjoys watching the habits Tanner’s breed are known for.

“Whenever he sees small birds, he’ll point up on them. And so that’s always nice, to take him outdoors, and just watch him interact with the wildlife,” Russell said.

Although Tanner may love pointing at them, Russell never lets him chase birds.

Russell said, “If you have a dog, life is better for everybody if it knows how to act in a way that’s fun for the owner and fun for the people around the owner, rather than an uncontrollable dog."

For Kim Henry, instruction assistant at Fairfax County Schools and Kirstie Henry, student, Fairfax, amusement is a large part of having a dog.

Kim Henry has had her golden retriever, Sammy, since he was a puppy and he is almost 7 years old now.

“He does lots of silly things. He likes to whine a lot, he likes to run around at a 100 miles an hour on my bed and on the couches and he goes a little crazy when he sees people,” Henry said.

According to the American Kennel Club, golden retrievers are the third most popular breed in the United States. However, Sammy enjoys some unique activities, according to Henry.

“He just likes to talk a lot. He’s not really into sticks or stones or balls or anything,” Henry said.

According to Henry’s daughter, Kirstie Henry, Sammy does not know how to play fetch. However, he does enjoy playing in the snow.

Henry said, “he loves to rub his face when it snows, and he just kind of slides through the snow.”

Although adopting a pet from the local animal shelter is a popular way to go, Morgan Merchant, of Navy Medical Records, of Herndon, rescued her pitbull, Daisy, before a shelter could.

“I was a server and there were people talking about how they were using her as bait for fighting. And I had their credit card and I told them they had to bring me the dog or I was calling the police,” Merchant said.

Daisy was 7 or 8 months when Merchant found her. Since their eventful introduction, Merchant and Daisy enjoy walking and sitting at home.

While she enjoys activities like running around Lake Royal three days a week, Patrick O’Keefe’s dog, Tippy, is a sensitive one.

Tippy’s active temperament and playfulness does not interfere with her ability to express emotion to O’Keefe, a real estate agent, Fairfax.

“If you ever get mad at her, she feels very bad about it. She’s a sweetheart,” O’Keefe said. “She’ll whine, she’ll put her head into you, she’s very affectionate,”