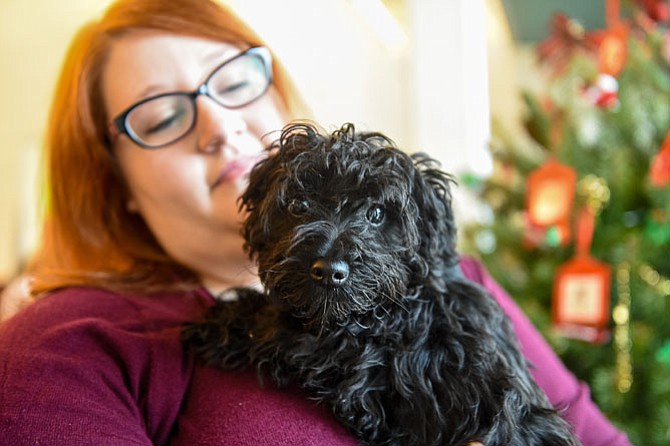 Two dogs from Page County, Va., arrive at the Vola Lawson Animal Shelter in Alexandria in search of homes. Dogs who can’t find homes in that county often succeed in Alexandria.

Potomac Highlands Animal Rescue (PHAR) in West Virginia delivers a dog to the Animal Welfare League of Alexandria, which operates the Vola Lawson Animal Shelter. Some West Virginia counties have a surplus of dogs, many of them in demand in Alexandria.

About once a week, Chestina Merriner loads four or five dogs into a white van and makes the 150-mile trip from Wardensville, W.Va., to Alexandria. Destination: the Animal Welfare League of Alexandria (AWLA).

The dogs, some strays and others rejected by their owners as “poor hunters,” are bound for a city they’ve never seen. Most come from Hardy or Grant counties in West Virginia, places without animal shelters or government animal services. “Some of our dogs were living outside, only used for hunting,” Merriner said. “We find out that what they really want to do is just lie on the couch.”

The journeys carry on a 20-year relationship between the nonprofit Potomac Highlands Animal Rescue (PHAR) and the AWLA, which operates the Vola Lawson Animal Shelter. The two groups have discovered that West Virginia has too many unwanted dogs and other pets in need of homes while many Alexandria residents are looking for that perfect pet to adopt. As a result, thousands of animals have found loving homes. "We transfer in animals that are overlooked in West Virginia but are relatively easy to place here in Alexandria, such as Chihuahuas," says Katie Faxon, AWLA’s behavior and transfer coordinator.

PHAR also transfers animals found to have serious medical conditions to Alexandria. In those cases, the animals are evaluated by the shelter veterinarian and treated, sometimes with surgery, at the AWLA’s expense. Some of the treatment is supported by AWLA’s special funds, such as Sarah’s Fund, which is dedicated to financing complex and costly medical procedures.

A beagle who arrived from West Virginia as “Howie” and was renamed Banjo by shelter staff is now living the good life as “Charlie” at a local home. When Howie first arrived in Alexandria, he had no interest in people, Faxon said, and guarded his food and toys. As Faxon and her team used behavior modification techniques with the dog, he became more social and softer with people. He was adopted by a single woman who adores him — and Charlie is the featured dog for July in the AWLA’s 2016 color-picture calendar, which can be purchased from the AWLA.

Changes in the AWLA’s systems for holding and housing animals and increasing adoptions have enabled the group to significantly expand assistance to animals from other shelters and rescue groups in need. The total of animals transferred in from other shelters has nearly tripled: In the three years from 2010 through 2012, some 465 animals were transferred in to the Vola Lawson shelter, but during the following three years, 1,286 animals came in from other areas. AWLA works with dozens of partners in need, many of them in metropolitan D.C. and across Virginia. Faxon, for example, regularly drives to the Page County Animal Shelter in Luray, Va., where they have a surplus of dogs, to bring back the best canine candidates for adoption.

“We're proud to have formed so many great relationships with other organizations, especially because these collaborations have helped thousands of new animals find new homes,” said AWLA Deputy Director Abbie Hubbard, who oversees the transfers program.

Transferring animals is a two-way street for AWLA. “For every species that comes in, we have a rescue group that we can turn to for specialized care,” Faxon said. For example, when a macaw was surrendered to the shelter, AWLA turned to Phoenix Landing Bird Rescue in North Carolina, which has special cage space for such birds and the expertise to handle them properly.

“We try to think outside the box for each animal,” Faxon said. And that is where AWLA volunteers can come in. Volunteers have driven hundreds of animals to rescue facilities in many states. Last summer, two volunteers packed three cats in the car to escort them to a new life at a farm in Maine.

It’s a happy ending for most animals involved in these journeys. “I don’t know what we’d do without the AWLA transfer program,” Merriner of PHAR said. “Without that help, there would be no other outlet for these dogs.”

Operated by the Animal Welfare League of Alexandria, the Vola Lawson Animal Shelter is at 4101 Eisenhower Ave., Alexandria, VA, 22304. Visit www.alexandriaanimals.org or call 703-746-4774. Join Alexandria’s Walk for Animals on Sunday, May 1, beginning at Market Square in Old Town Alexandria.