Arlington: Gondola Project Gets Off the Ground
Votes

Arlington: Gondola Project Gets Off the Ground 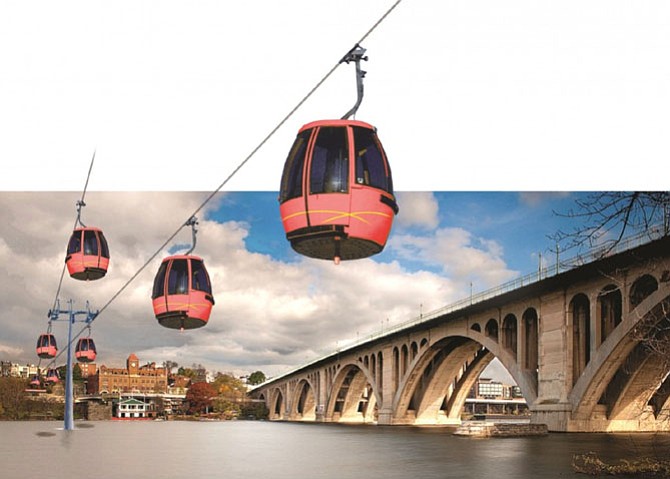 This was the logic behind a unanimous vote at the Jan. 28 County Board meeting, when the board approved participation in a feasibility study for a gondola doorway connection between Rosslyn and Georgetown. The county will contribute $35,000 as well as staff and technical experience to the study.

Members of the County Board remain unconvinced of the plan’s practicality, but there’s enough potential that it merited further study.

The need for some kind of transportation improvement isn’t in dispute. Dennis Leach, deputy director of transportation, noted that the Key Bridge between Rosslyn and Georgetown is the most heavily used bike and pedestrian sidewalk in Arlington, and the road carries over 50,000 vehicles per day.

“This is the first step to determine if this is a feasible option,” said Flanagan-Watson.

Arlington County was initially set to contribute $40,000 of the study’s $205,000. An additional $30,000 comes from various sources in Arlington, including $20,000 from the Rosslyn Business Improvement. District.

On the Washington D.C. side, $75,000 is being contributed by the Georgetown Business Improvement District and $25,000 by Georgetown University. The District of Columbia Department of Transportation is contributing $35,000 to the study, $5,000 less than Arlington, and a major sticking point for a County Board already rooting through potential controversies. Though overall Washington contributors make up twice as much of the project’s costs as Arlington contributors, County Board members were concerned with the symbolism of the only other government at the table paying less than the County Board would.

“I am very concerned that the District, which from a transportation perspective would solve a lot of problems, yet when you look at the jurisdictional split they’re playing less than Arlington. I don’t understand that math,” said County Board Member Christian Dorsey. “It’s worth less to them than to Arlington?”

Joe Sternlieb, president of the Georgetown Business Improvement District, said it had started with an even 50-50 contribution request on either side of the river.

“It was taking so long that we put in more money on our side,” said Sternlieb. “I don’t think it’s a productive conversation to argue about $5,000. They’re committed to this .... We have 50,000 cars going over the Key Bridge every day, and it’s in everyone’s interests to reduce that.”

“We don’t dispute that at all,” said Dorsey, “but you have to recognize that constituents may look at that a little bit differently, and we represent them as well.”

Victor Hoskins, Arlington Economic Development director, also emphasized that the benefits of the gondola would be symbiotic rather than competitive. In particular, Hoskins noted that Arlington Cemetery and the Marine Corp Memorial, the county’s two largest tourist attractions, are located in Rosslyn.

“The easier it is to get there, the better it will be for Arlington,” said Hoskins, “anything that can lower the barrier of movement will benefit both.”

Ultimately, it was Mary-Claire Burick, executive director of the Rosslyn BID, who helped the County Board haggle down to a $35,000 contribution. Burick said the project was important enough to the business community that they would be willing to cover that extra $5,000 cost to put the Washington and Arlington governments on an even footing.

“We had the very same concerns when we were first approached, but after hearing other partners doing this and looking at other projects in United States and abroad, it seemed to make more sense,” said Burick. “My hope is that Arlington County has that seat at the table.”

For some on the County Board, it was Burick’s pledge that sealed the approval of the study.

“I started out really skeptical,” said County Board Chair Libby Garvey. “I am still pretty skeptical, but I want to have an open mind. It means a lot that the business community really stepped up.”

Chris Slatt, chair of Arlington’s Transportation Commission, shared the hopes and misgivings his group expressed when the project came before them.

Though unspoken, the specter of the streetcar loomed over the proceedings. The expensive transportation project, cancelled two years ago, sharply divided the county and was largely responsible for breaking the uncontested democratic hold on the board. John Vihstadt, one of the County Board members who’d helped defeat the streetcar proposal, said he was wrestling with the real opportunities to explore a benefit to transit, a boost to tourism, and a potential to foster economic development against his preconceived notions of this as a “cartoonish, Disney-like proposition.”

When the time came to vote on the study, County Board Member Jay Fisette made the initial motion, and it was Vihstadt who seconded it.

Vihstadt wasn’t alone. Each member of the board expressed misgivings. For County Board Member Katie Cristol, there was concern that the study obligated the county to lend already overstrained county staff as an in-kind contribution. But in their unanimous approval, each of the County Board members said they believed it was at least worth consideration.

“I have no idea if this is a good idea, but I think studying it is a good idea,” said Fisette. “Everyone that first hears it has skepticism. But if there is to be benefit, it will clearly be mutual benefit.”

“While I don’t have any idea of whether the gondola is practical or desirable, the only way we’re going to be able to answer that question is if we get some data,” said Dorsey. “So I have absolutely no problem with a feasibility study. It guarantees that Arlington has a seat at the table.”