Encouraging confidence in reading through puppies. 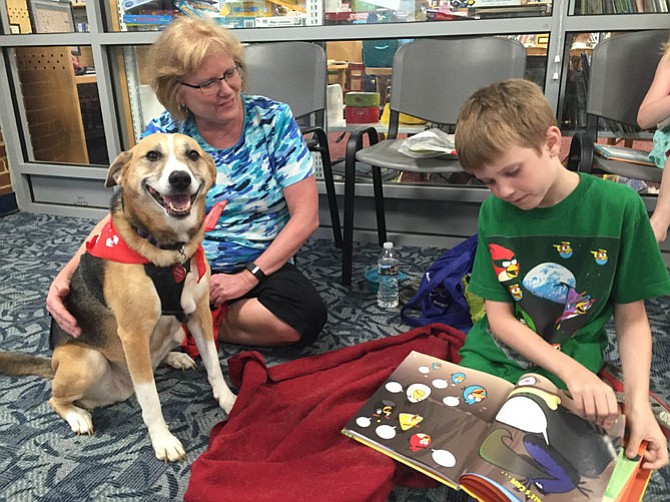 Maggie doesn’t talk back. Caroline Schofield, a second grader, can read to Maggie without judgment or being corrected. Maggie lays next to Caroline, occasionally wagging her tail and resting her head against the girl’s left while Caroline reads from a book.

Paws to Read is a program run through the D.C. nonprofit PAL, People. Animals. Love. PAL runs various programs that arrange for elderly, sick, or others in need to receive visits and support from dogs and puppies. At Paws to Read, children in first through sixth grade at all range of reading ability can come to the library and read to a furry friend.

All dogs with Paws to Read are registered therapy dogs. They are universally friendly and calm around children as well as other dogs. Five dogs were present for the Aug. 9 Paws to Read session at the Duncan Branch Library in Del Ray. Each of the children at Paws to Read is paired with a dog for a 15-20 minute session. The children select books, though some pick ones they’re told the dogs particularly enjoy.

“She was so excited,” said Teresa Schofield, Caroline’s mother. “She’s an avid reader and she’s been dying to have a dog … I think this really helps with them read confidently and helps with their presentation.”

Aug. 9 was Caroline’s first time at the program, but others in attendance are regulars at the events. Martha-Helene Stapleton’s daughters, Veronica and Catalina Dodson, have been coming to Paws to Read for years.

“We don’t have a dog, so this is their pet time,” said Stapleton. “It gives them presentations skills. It helps them develop their voice, and the voice of characters. I tell families that are new to the area about this. Not enough parents know about this.”

“We love the program,” said Robin Sofge, Youth Services manager for the library. “It helps promote literacy. The dogs are friendly and the kids look forward to it. The dogs won’t criticize them or say they pronounced something wrong. It’s a positive experience for everyone.”

Henry Dorton has been working with Paws to Read since 2010. Henry Dorton would bring his dog to the nursing home to see his father, who had dementia, and found that many of the elderly citizens in home loved seeing the dogs. He registered his dog as a therapy dog and joined PAL.

“The program isn’t designed to teach kids how to read, it just gives them a no pressure environment for them to want to read,” said Henry Dorton. “Some kids come in every month, and if they come in often, they get better at it. Some kids have taught themselves to read upside down so they can show the pictures to the dogs.”

Henry Dorton says the program is a win-win, because his dogs get noticeably happier at the Paws to Read program.

“It’s like a fraternity for the dogs,” said Henry Dorton. “They get to see the children and their dog friends.”

In addition to reaching children to be more comfortable with reading out loud, Henry Dorton’s daughter Elizabeth Dorton says she’s seen the program teach some children to be more comfortable with the pets. Elizabeth Dorton says some children start the program sitting away from the dog, but after a few sessions are up close and petting them.

“I think the dogs help motivate a lot of these kids,” said Ina Watson, at the program with her dog Jilly.

Henry Dorton said some children come in and have favorite dogs they always try to read to, others like going around to different dogs and collecting bookmarks the owners have made about their dogs like trading cards. Stapleton said her daughters were the kind that collect bookmarks, but that Maggie was their favorite. Nicole Seibel said her son Connor Seibel always tries to read to Bramble, a whippet who comes to the events constantly wrapped up in a blanket. Nicole Seibel says her children, Connor and Morgan, have been going to Paws to Read for years.

“They like having an audience when they read,” said Nicole Seibel. “They like talking to the handlers and the dogs. The handlers here are so great, they’re so encouraging. Boys are hard to get to read, but this has kept him reading. This is one of those things they look froward to.”

Seibel says one of the favorite things she’s seen at the program is the respect with which the children treat the handlers.

“When you’re raising kids, you hope something you say sticks,” said Seibel, “and seeing them with the trainers, being polite, that feels good. It’s awesome.”

“It really reinforces manners with adults,” agreed Gayle Hartman, whose daughter Eliana is particularly fond of a beagle that comes to some of the events.

“My daughter was a reluctant reader but loves dogs,” said Hartman. “This helped her reading confidence. It really helped encourage and motivate her. The second or third time we came, she was really excited to read a book. I remember that feeling when she said that. Even having a bookmark from this has helped encourage them to read.”