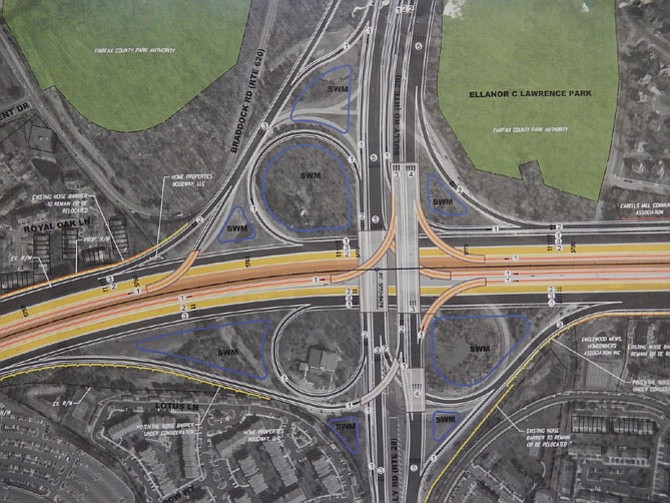 Map of the project area showing one of the proposed design alternatives. Photo Contributed

Good news for drivers who take the I-66/Route 28 exits and entrances in Centreville — and in this area, that’s pretty much everyone. A fix for the congestion, especially during rush hours, just took a giant step toward becoming a reality.

The Northern Virginia Transportation Authority (NVTA) has passed its 2017 budget, including $466 million total for 12 projects in Northern Virginia. And locally, $300 million of that amount is earmarked for the I-66/Route 28 Interchange improvements. 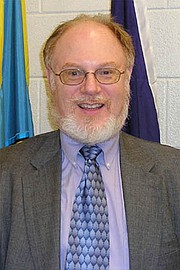 They’ll be constructed as part of the overall I-66 Corridor improvements being done by VDOT. The $300 million will be spent on the Route 28 Interchange’s design and engineering work, environmental mitigation, right-of-way acquisition and construction.

“This funding for improvements to the I-66/Route-28 interchange will be a major part of the I-66 transformation that VDOT is working on,” said Supervisor Kathy Smith (D-Sully). “Combined with the governor’s recent announcement of a $50 million investment at Dulles airport, our area is seeing a record year for infrastructure improvements.”

The NVTA also allocated $5 million for a separate project — the widening of Route 28 from Route 29 in Centreville to the Prince William County line. The money will fund the design and engineering phases, as well as right-of-way acquisition, environmental mitigation and construction.

All in all, said Smith, things are looking up for traffic problems in Sully. “In 2013, then Gov. McDonnell created some new funding sources for transportation, and the money would be allocated through the NVTA,” she said. “[And now], $305 million is coming here to the Sully District.”

In May 2015, VDOT held an informational meeting at Stone Middle School about plans to eliminate congestion at I-66/Route 28 in Centreville. Attendees learned about three, potential design alternatives and saw maps illustrating each one. They also heard a presentation by VDOT Project Manager Susan Shaw and then gave their feedback on each alternative.

A decision on which one will go forward has not yet been made, but the proposed alternatives are as follows:

*Alternate 2B offers direct access between Route 28 north and I-66 east/west.

*Alternate 2C has the smallest footprint, minimizing the impact to E.C. Lawrence Park. It has the same travel movements as Alternate 2A, as well as access between the I-66 express lanes west and Braddock and Walney roads in Centreville. It also extends Poplar Tree Road to the park.

Mike Coyle, who works on transportation and public-safety issues as part of Smith’s team, recently explained that “Previously, VDOT stated it likely will mix and match the design proposals presented to the public. For example, one phase for the I-66 travel lanes may be selected which may not correspond with the same number of an interchange design.”

He also noted that the Poplar Tree Bridge extension will occur as part of the interchange project. But meanwhile, he said, “VDOT is getting closer to narrowing the option it believes is best. Clearly, the NVTA action is another positive step for the project by providing an infusion of money.”

Sully District Transportation Commissioner Jeff Parnes also weighed in on this latest development for the I-66/Route 28 Interchange. “The key stumbling block for the Transform 66 multimodal effort has been the funding,” he said. “Whether it ends up being solely state-funded or a public/private partnership, there are billions of dollars at stake.”

He said the removal of the last of the [traffic] lights on Route 28, north of the Route 29 intersection, is now tied into the I-66 widening. And, he added, “The state has incentivized the proposed work by offering bonuses if the Route 28/I-66 interchanges, as well as the Walney Road and Braddock Road improvements, could be done early in the I-66 widening effort.”

“With the NVTA $300 million grant earmarked for the Route 28/I66 Interchange project, it now moves to the forefront,” continued Parnes. “[And although] a design preference has not been selected, there will be public informational and design review meetings in the fall of this year, as VDOT hopes to start construction in late 2017.”

He also stressed that he’s long been a strong advocate for a full interchange at Route 28, bringing back the traffic movements between Walney and Braddock roads and Route 28 that, several years ago, became prohibited.

As a result, explained Parnes, these movements have been “pushed to the Route 29/I-66 Interchange — northbound Route 28 to westbound I-66, and eastbound I-66 to southbound Route 28.” However, he said, “The complexity of once again connecting Walney Road to Braddock Road — and allowing their access to the full movements at the I-66/Route 28 Interchange — makes this a very complicated and expensive project.”

“The public will have a chance to comment on the plans,” said Parnes. “If people think full interchange mobility is important, they need to make their voices heard when the opportunity once again presents itself.”

Public information meetings on this project will be held this fall. They’ll be followed early next year by the design public hearings. Below is a schedules of VDOT’s anticipated milestones:

This fall: Selection of private partner